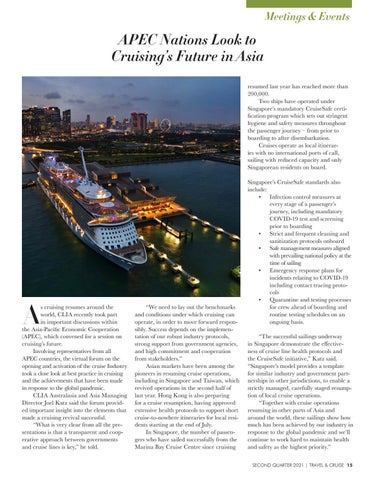 APEC Nations Look to Cruising’s Future in Asia resumed last year has reached more than 200,000. Two ships have operated under Singapore’s mandatory CruiseSafe certification program which sets out stringent hygiene and safety measures throughout the passenger journey – from prior to boarding to after disembarkation. Cruises operate as local itineraries with no international ports of call, sailing with reduced capacity and only Singaporean residents on board.

s cruising resumes around the world, CLIA recently took part in important discussions within the Asia-Pacific Economic Cooperation (APEC), which convened for a session on cruising’s future. Involving representatives from all APEC countries, the virtual forum on the opening and activation of the cruise Industry took a close look at best practice in cruising and the achievements that have been made in response to the global pandemic. CLIA Australasia and Asia Managing Director Joel Katz said the forum provided important insight into the elements that made a cruising revival successful. “What is very clear from all the presentations is that a transparent and cooperative approach between governments and cruise lines is key,” he told.

“We need to lay out the benchmarks and conditions under which cruising can operate, in order to move forward responsibly. Success depends on the implementation of our robust industry protocols, strong support from government agencies, and high commitment and cooperation from stakeholders.” Asian markets have been among the pioneers in resuming cruise operations, including in Singapore and Taiwan, which revived operations in the second half of last year. Hong Kong is also preparing for a cruise resumption, having approved extensive health protocols to support short cruise-to-nowhere itineraries for local residents starting at the end of July. In Singapore, the number of passengers who have sailed successfully from the Marina Bay Cruise Centre since cruising

Singapore’s CruiseSafe standards also include: • Infection control measures at every stage of a passenger’s journey, including mandatory COVID-19 test and screening prior to boarding • Strict and frequent cleaning and sanitization protocols onboard • Safe management measures aligned with prevailing national policy at the time of sailing • Emergency response plans for incidents relating to COVID-19 including contact tracing protocols • Quarantine and testing processes for crew ahead of boarding and routine testing schedules on an ongoing basis. “The successful sailings underway in Singapore demonstrate the effectiveness of cruise line health protocols and the CruiseSafe initiative,” Katz said. “Singapore’s model provides a template for similar industry and government partnerships in other jurisdictions, to enable a strictly managed, carefully staged resumption of local cruise operations. “Together with cruise operations resuming in other parts of Asia and around the world, these sailings show how much has been achieved by our industry in response to the global pandemic and we’ll continue to work hard to maintain health and safety as the highest priority.” SECOND QUARTER 2021 | TRAVEL & CRUISE 15