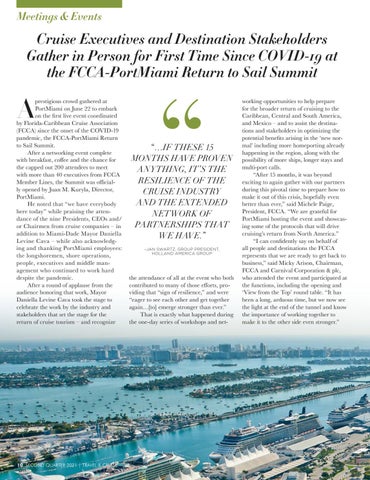 prestigious crowd gathered at PortMiami on June 22 to embark on the first live event coordinated by Florida-Caribbean Cruise Association (FCCA) since the onset of the COVID-19 pandemic, the FCCA-PortMiami Return to Sail Summit. After a networking event complete with breakfast, coffee and the chance for the capped out 200 attendees to meet with more than 40 executives from FCCA Member Lines, the Summit was officially opened by Juan M. Kuryla, Director, PortMiami. He noted that “we have everybody here today” while praising the attendance of the nine Presidents, CEOs and/ or Chairmen from cruise companies – in addition to Miami-Dade Mayor Daniella Levine Cava – while also acknowledging and thanking PortMiami employees: the longshoremen, shore operations, people, executives and middle management who continued to work hard despite the pandemic. After a round of applause from the audience honoring that work, Mayor Daniella Levine Cava took the stage to celebrate the work by the industry and stakeholders that set the stage for the return of cruise tourism – and recognize

“…IF THESE 15 MONTHS HAVE PROVEN ANYTHING, IT’S THE RESILIENCE OF THE CRUISE INDUSTRY AND THE EXTENDED NETWORK OF PARTNERSHIPS THAT WE HAVE.” –JAN SWARTZ, GROUP PRESIDENT, HOLLAND AMERICA GROUP

the attendance of all at the event who both contributed to many of those efforts, providing that “sign of resilience,” and were “eager to see each other and get together again…[to] emerge stronger than ever.” That is exactly what happened during the one-day series of workshops and net-

working opportunities to help prepare for the broader return of cruising to the Caribbean, Central and South America, and Mexico – and to assist the destinations and stakeholders in optimizing the potential benefits arising in the ‘new normal’ including more homeporting already happening in the region, along with the possibility of more ships, longer stays and multi-port calls. “After 15 months, it was beyond exciting to again gather with our partners during this pivotal time to prepare how to make it out of this crisis, hopefully even better than ever,” said Michele Paige, President, FCCA. “We are grateful for PortMiami hosting the event and showcasing some of the protocols that will drive cruising’s return from North America.” “I can confidently say on behalf of all people and destinations the FCCA represents that we are ready to get back to business,” said Micky Arison, Chairman, FCCA and Carnival Corporation & plc, who attended the event and participated at the functions, including the opening and ‘View from the Top’ round table. “It has been a long, arduous time, but we now see the light at the end of the tunnel and know the importance of working together to make it to the other side even stronger.”