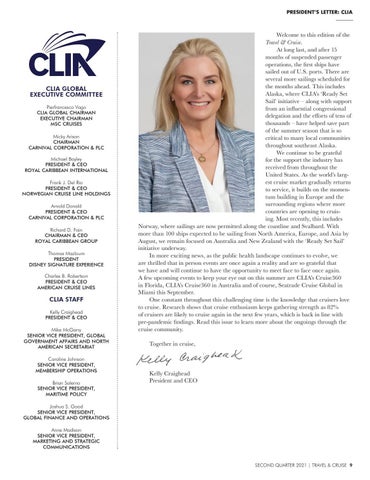 Welcome to this edition of the Travel & Cruise. At long last, and after 15 months of suspended passenger operations, the first ships have sailed out of U.S. ports. There are several more sailings scheduled for the months ahead. This includes Alaska, where CLIA’s ‘Ready Set Sail’ initiative – along with support from an influential congressional delegation and the efforts of tens of thousands – have helped save part of the summer season that is so critical to many local communities throughout southeast Alaska. We continue to be grateful for the support the industry has received from throughout the United States. As the world’s largest cruise market gradually returns to service, it builds on the momentum building in Europe and the surrounding regions where more countries are opening to cruising. Most recently, this includes Norway, where sailings are now permitted along the coastline and Svalbard. With more than 100 ships expected to be sailing from North America, Europe, and Asia by August, we remain focused on Australia and New Zealand with the ‘Ready Set Sail’ initiative underway. In more exciting news, as the public health landscape continues to evolve, we are thrilled that in person events are once again a reality and are so grateful that we have and will continue to have the opportunity to meet face to face once again. A few upcoming events to keep your eye out on this summer are CLIA’s Cruise360 in Florida, CLIA’s Cruise360 in Australia and of course, Seatrade Cruise Global in Miami this September. One constant throughout this challenging time is the knowledge that cruisers love to cruise. Research shows that cruise enthusiasm keeps gathering strength as 82% of cruisers are likely to cruise again in the next few years, which is back in line with pre-pandemic findings. Read this issue to learn more about the ongoings through the cruise community. Together in cruise,