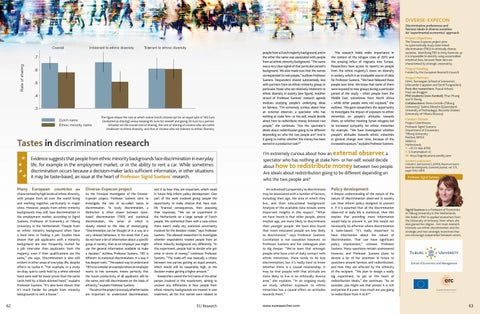 The figure shows the rate at which native Dutch citizens opt for an equal split of 160 Euro (indicated as sharing) versus keeping 85 Euro for oneself and giving 20 Euro to a partner. Included are the overall rate of sharing, the rate of sharing of citizens who are rather intolerant to ethnic diversity, and that of citizens who are tolerant to ethnic diversity.

Diverse-Expecon project As the Principal Investigator of the DiverseExpecon project, Professor Suetens aims to investigate the role of so-called tastes in discrimination. To study discrimination, a distinction is often drawn between tastebased discrimination (TBD) and statistical discrimination, the latter of which is closely related to the idea of stereotyping. “Discrimination can be thought of in a way as a very rational behaviour, in the sense that if you do not have a lot of information about a specific group in society, then as an employer you might use the general information available to make a decision,” outlines Professor Suetens. TBD is different to statistical discrimination; in a way it has deeper roots. “The easiest way to understand TBD is to consider an example where an employer wants to hire someone, knows perfectly that the future productivity of all applicants will be the same, and still discriminates on the basis of ethnicity,” explains Professor Suetens. The aim in the project is to study whether tastes are important to understand discrimination,

and if so how they are important, which could in future help inform policy development. One part of the work involved giving people the opportunity to make choices that have reallife financial consequences, then assessing their responses. “We ran an experiment in the Netherlands on a large sample of Dutch people. We confronted them with a case where there wasn’t really any statistical uncertainty involved for the decision-maker,” says Professor Suetens. This allowed researchers to investigate whether respondents treated people from an ethnic minority background any differently. “In this experiment, people had to decide who got what in terms of money,” continues Professor Suetens. “The trade-off was basically a choice between two parties getting an equal amount, which would still be reasonably high, or the decision-maker getting a higher amount.” Researchers varied the first name of the other person involved in this experiment, aiming to uncover any differences in how people from ethnic minority backgrounds are treated. In one treatment, all the first names were related to

people from a Dutch majority background, and in the other the name was associated with people from an ethnic minority background. “The name was a very clear signal of that particular person’s background. We also made sure that the names corresponded to real people,” outlines Professor Suetens. Respondent shared substantially less with partners from an ethnic minoirity group; in particular those who are relatively intolerant to ethnic diversity in society (see figure). Another strand of Professor Suetens’ research agenda involves studying people’s underlying ideas on fairness. “I’m extremely curious about how an external observer, a spectator who has nothing at stake him- or her-self, would decide about how to redistribute money between two people,” she continues. “Are the spectator’s ideals about redistribution going to be different depending on who the two people are? And is it going to matter whether the money has been earned in a productive task?”

This research holds wider importance in the context of the refugee crisis of 2015 and the ensuing influx of migrants into Europe. Researchers have access to reports on people from the ethnic majority’s views on diversity in society, which is an invaluable source of data for Professor Suetens. “We have followed these people over time. We know that some of them were exposed to new groups during a particular period of the study – often people from the Middle East, sometimes from North Africa – while other people were not exposed,” she outlines. This gave researchers the opportunity to investigate the impact of exposure to ethnic minorities on people’s attitudes towards them, so whether meeting Syrian refugees led to increased sympathy for ethnic minorities for example. “We have investigated whether people’s attitudes towards ethnic minorities in general change over time, because of the increased exposure,” explains Professor Suetens.

I’m extremely curious about how an external observer, a spectator who has nothing at stake him- or her-self, would decide about how to redistribute money between two people. Are ideals about redistribution going to be different depending on who the two people are? An individual’s propensity to discriminate may be associated with a number of factors, including their age, the area in which they live, and their educational background. Analysis of the available data reveals some important insights in this respect. “What we have found is that older people, above median age, are more likely to discriminate than younger people. We have also found that more educated people are less likely to discriminate,” says Professor Suetens. Correlation is not causation however, so Professor Suetens and her colleagues plan to dig deeper. “We’ve seen that amongst people who have a lot of daily contact with ethnic minorities, there tends to be less discrimination, but it’s really hard to know whether there is a causal relationship. It may be that people with that attitude are more likely to live in an ethnically diverse area,” she explains. “In an ongoing study we study whether exposure to ethnic minorities has a causal effect on attitudes towards them.”

The Diverse-Expecon project aims to systematically study taste-based discrimination (TBD) in ethnically diverse societies. Identifying TBD is tricky however, as it is impossible to identify using uncontrolled empirical data, because these data are characterised by strategic uncertainty.

Funded by the European Research Council.

Policy development A deeper understanding of the nature of the nature of discrimination observed in society can then inform policy designed to prevent it. If it is assumed that all the discrimination observed in daily life is statistical, then this implies that providing more information would help to prevent it, yet this would not necessarily be effective where discrimination is taste-based. “It’s really important to have information about the nature of discrimination. That can have significant policy implications,” stresses Professor Suetens. Many questions remain unanswered however, and Professor Suetens plans to devote a lot of her attention in future to questions around fairness and redistribution, and how they are affected by the ethnicity of the recipient. “We plan to design a really big experiment, to get at the heart of redistribution ideals,” she continues. “As an outsider, you might see that person A is rich and person B is poor. How much are you going to redistribute from A to B?”

Sigrid Suetens is a Professor of Economics at Tilburg University in the Netherlands. She holds a PhD in applied economics from the University of Antwerp, from where she also gained her degree . Her main research interests are ethnic discrimination and the strategic and non-strategic incentives that can encourage cooperation between actors.

While sometimes discrimination occurs because a decision-maker lacks sufficient information, in other situations it may be taste-based, an i...

While sometimes discrimination occurs because a decision-maker lacks sufficient information, in other situations it may be taste-based, an i...