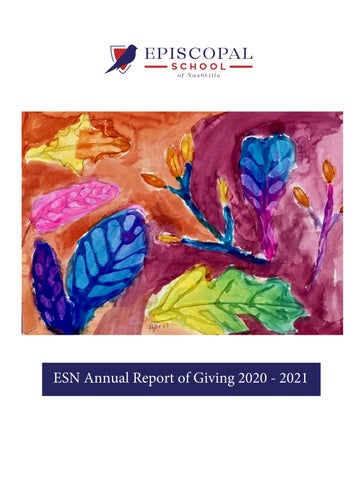 THE HEAD OF SCHOOL Dear Friends and Supporters of Episcopal School of Nashville, The 2020-21 was a year of change and growth. Every year is a year of change and growth. In fact, there is no “normal” year for Episcopal School of Nashville. Each year we are a new school because we add a grade level. Each year, our community has risen to meet every challenge that has appeared. Each year, we have found ways to live our mission and nurture the joy of learning and the spirit of discovery in each of our students. In short, we are a community born of adversity - location, finances, tornadoes, and a global pandemic. Now, midway through our sixth year, we gratefully serve 122 students in Pre-Kindergarten through Seventh Grade and we are excited to add Eighth Grade–our first graduating class–for the 2022-23 school year. Despite the challenges, we have persevered and we have excelled because of tremendous support from parents, grandparents, faculty, and friends near and far. The Purple Martin Annual Fund is the backbone of that support. Your gifts sustain us; your gifts are central to our ability to live our mission of nurturing the joy of learning and the spirit of discovery in each of our students. Understanding Episcopal School&#39;s finances is the first step to understanding its need for philanthropic support. The Purple Martin Annual Fund is the most critical source of immediately available and flexible funds. Gifts to the Purple Martin Annual Fund are crucial to the financial health of the School and go towards recruiting and retaining the best possible faculty and staff, and to providing need-based financial assistance to bright and talented students who might not otherwise get the opportunity to attend Episcopal School. Programs, curriculum, technology, and facilities will change over time, but mission-aligned people remain the greatest investment in our efforts to create a life-changing education. In addition to the generous donors who have made the operation of Episcopal School possible, in January of 2020, we also launched our ambitious “Build Our Nest” capital campaign to raise $2 million towards school renovations, scholarships for need-based financial aid, and upgrades to classroom and school wide technology and programming. Both the capital campaign and annual giving are crucial to the success of Episcopal School. Included within the pages of this report are the names of those dedicated servants of Episcopal School who supported the financial health of this school in a time when our community needed it most. We applaud and thank every donor who continues to make possible an Episcopal School in Nashville and with mind and spirit soaring, let’s keep movin’ on!

WITH GRATEFUL THANKS TO THOSE WHO SUPPORTED THE SCHOOL BETWEEN JULY 1, 2020 THROUGH JUNE 30, 2021

The Episcopal School of Nashville, a diverse urban independent school, is dedicated to nurturing the joy of learning and the spirit of discovery in each of its students.

To shape students who are intellectually, spiritually, and responsibly engaged with the place, community, and world they call home.

In honor of Dr. Paul Teschan

In honor of Susannah Aplin

In honor of Corrine and

&quot;Sending our boys to ESN was one of the best decisions we ever made. The ESN community has been like a family to us, and we have so enjoyed watching the school bloom over the last several years. The small class sizes, excellent teachers and faculty, and supportive and dedicated families have allowed our boys to grow in ways we did not think possible. We so appreciate how the school has been able to adjust to the challenges of the last few years and has tailored the learning and social environment with flexible strategies that have ensured that the students can learn and grow to their fullest extent.&quot; MELISSA AND NICK BEAUDOING, ESN PARENTS

“We love Episcopal School of Nashville for so many reasons, especially the commitment to its mission of diversity, equity, and inclusion. We have witnessed our son grow not only academically, but emotionally and spiritually. ESN provides a community that’s both challenging and supportive, unique and familiar. We are grateful to be a part of the ESN family!” -Anne Louise Cranwell and Chris Wooster