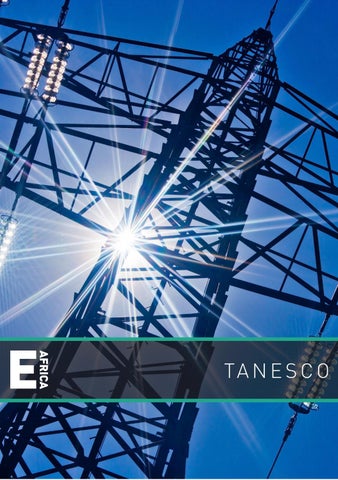 Tanzania Electric Supply Company (TANESCO) is the sole provider of electricity in Tanzania, and owns the vast majority of the electricity generating, transmitting and distributing facilities across the Tanzania mainland. It has worked tirelessly to electrify more and more rural areas of the terrain which would be otherwise unconnected, and now looks to hybrid solutions to secure the countryâ&#x20AC;&#x2122;s lofty generation aims. 2 / www.enterprise-africa.net

At the turn of the century the first public electricity supply in Tanzania, then Tanganyika, was established by German colonialists at Dar es Salaam. In 1931, the Government handed over the undertaking at Dar es Salaam to private enterprises; one of these companies was the Tanganyika Electric Supply Company Ltd (TANESCO), later merging with another - the District Electric Supply Company Ltd (DARESCO) - in 1964 and becoming the Tanzania Electric Supply Company (TANESCO) that has shaped the country’s power today. Following Tanganyika’s gaining independence in 1961, the government acquired the company in its entirety by 1975, becoming its sole shareholder. Today, TANESCO is a parastatal organisation under the Ministry of Energy and Minerals and generates, transmits, distributes and sells electricity to the Tanzania mainland, and sells bulk power to the Zanzibar Electricity Corporation (ZECO) which is in turn sold to the islands of Unguja and Pemba. The Tanzania Development Vision 2025 envisages that GDP per capita will rise from USD$640 to at least USD$3000 by 2025. Central to achieving this will be rapid economic growth propelled by reliable, affordable and environmentally friendly electricity

supply, and generation capacity will have to increase from the current 1583 MW to at least 10,000 MW by 2025. “Our mission is to generate, transmit and supply electricity in the most effective, competitive and sustainable manner possible. We strive to be an efficient and commerciallyfocused utility supporting the development of Tanzania.” RURAL ELECTRIFICATION Electrification of rural areas and small townships has been a major priority for TANESCO throughout its operational lifetime, since the declaration of a 1965 policy by the Tanzanian Government. It was agreed that if TANESCO was required to provide power supply to more economically precarious townships, this would be subsidised by either the Government, the local authority or prospective large consumers in the areas. TANESCO’s five off-grid substations remain vital to bringing power to areas which would be otherwise unconnected, and the Netherlands’s Zwart has been an integral partner to making this reality. “Our power plants ensure that there is reliable and stable electricity in rural and remote areas,” the company explains. “A large area in Tanzania has

// WE STRIVE TO BE AN EFFICIENT AND COMMERCIALLYFOCUSED UTILITY SUPPORTING THE DEVELOPMENT OF TANZANIA // access to power thanks to Zwart, where it has more than 25 years’ experience of facilitating off-grid power on behalf of Tanesco. Our specialists have realised more than one hundred of these reliable and cost effective power plants in Africa.” Zwart’s off-grid power plants are trusted to deliver power in the most challenging environments throughout the world, helping to provide communities, businesses and utilities with a reliable source of power in places where the electricity grid is unreliable or not present. The plants utilise a mix of solar, diesel and, where possible, battery storage, to ensure that reliable, cost effective power is on tap at all times. “Zwart’s Energy Solutions enables businesses and communities to flourish in regions where the investment

When it matters most 90

25 Years of partnership with Tanesco

needed to connect to the grid is just too great,” Zwart clarifies, “or, in the case of a national park in Tanzania, where installing overhead lines would have impacted the local environment. In such cases an off-grid power plant provides the perfect solution.” BANKING ON MINING A new revenue plan sees TANESCO looking to mining firms to raise revenues, as it begins operating profitably. Large mining companies produce hundreds of megawatts of electricity using subsidised diesel in order to meet demands for better power alternatives. However, improved generation and distribution capacity which increases alongside TANESCO’s financial might is leading the government to conclude that all mining companies should be connected to the national grid. Energy Minister Medard Kalemani is adamant that companies should proactively seek new business, rather than submitting to their historic tendency to wait for it to come to them. He added that with TANESCO becoming a profitable entity, the time had come for money to be reinvested into power generation to meet the demands of various segments. “We no longer depend on government subsidies,” Kalemani stated. “We expect to register a Sh9 billion operating profit this year. In

// A COMBINATION OF SOLAR POWER AND DIESEL GENERATORS ENSURES THAT ELECTRICITY IS GENERATED IN THE MOST ENERGYEFFICIENT AND ECONOMICAL WAY // www.enterprise-africa.net / 5

TREATED TIMBER PRODUCTS (TTP) SPECIALIZES IN THE PRODUCTION OF TRANSMISSION, TELEPHONE, FENCING AND BUILDING POLES. TTP was established in 1939 and is now the largest producer of Utility Poles in the Southern Hemisphere. With our six treating plants strategically positioned near Durban and Maputo harbours, we are able to serve the local and export market with comparative ease. Our transmission poles are pressure treated with either Creosote or Copper Chrome Arsenic (CCA) to meet the South African National Standard SANS 754:2013, Tanesco S11 and Kenya KS516 or any other recognized national VYPU[LYUH[PVUHSZWLJPÃ&#x201E;JH[PVU TTP carries a large stock of treated and untreated poles, giving us the ability to meet large orders at short notice.

2015, TANESCO’s revenues stood at Sh9 billion per week but this year we are making Sh46 billion per week. If we can connect large mining companies, we will raise our earnings.” Kalemani conclude by urging mining companies to present their transformer requirements to TANESCO, in order that they can be distributed to the companies as required. TANESCO is also mobilising in collaboration with the Energy and Water Utilities Regulatory Authority (EWURA) to curb the illegal connection to power in the Arusha region. Arusha Region TANESCO Manager Herini Mhina explained that various strategies had been implemented to combat the scourge, including the compulsory registration of all electrical contractors

// OUR MISSION IS TO GENERATE, TRANSMIT AND SUPPLY ELECTRICITY IN THE MOST EFFECTIVE, COMPETITIVE AND SUSTAINABLE MANNER POSSIBLE //

within the EWURA system and forbidding any unregistered personnel from performing electrical work. “We will deal with all electrical contractors who sign customers’ forms outside TANESCO offices because that is not allowed; that has to be done inside our offices within the laid down procedure and there will be no bureaucracy.” Mhina clarified that this would be closely monitored in order to eliminate the possibility of further contraventions. SOLAR FUTURE Africa is a leader in hybrid power; with only 22% of Africa’s population having access to power, areas with suitable climates are ideally placed to house a solar hybrid power plant as a vital solution. Faced with rapid growth in electricity demand, the Government of Tanzania has set the goal of increasing the installed generating capacity, reflected in the implementation of the 2016 update of the electrical system master plan. In tandem, TANESCO has decided to increase the share of renewable energies in its energy mix to 40%, for both environmental and financial reasons. The Citizen reported at the end of last year that TANESCO had received 52 bids from local and international solar

developers desperate to be a part of the construction of large-scale solar PV projects across six regions. With a combined capacity of 150 MW, TANESCO aims to achieve power generation from plants in the regions of Dodoma, Singida, Shinyanga, Mwanza, Simiyu and Iringa over the next two years. The tender scheme would represent the first real attempt to bring large-scale solar to the sub-Saharan African nation, if implemented, and would significantly boost Tanzania’s efforts to implement mini-grid solar projects to improve the share of renewables in its energy mix. Zwart’s own hybrid solutions are found throughout Africa, and are crucial to enabling communities to flourish. “Our hybrid off-grid plants power communities and businesses in developing countries. A combination of solar power and diesel generators ensures that electricity is generated in the most energy-efficient and economical way. We have already installed over 100 power systems in Africa,” Zwart concludes, “driving local businesses and connecting these communities to the world.

Feature article on TANESCO from the December 2019 edition of Enterprise Africa magazine.

Feature article on TANESCO from the December 2019 edition of Enterprise Africa magazine.