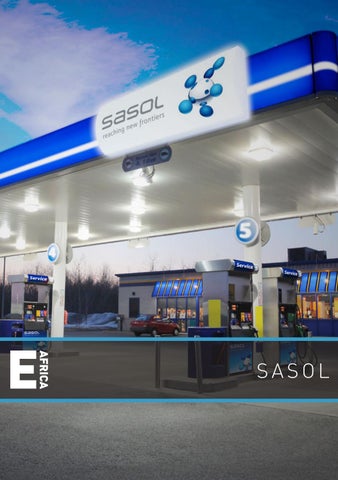 Leading South African petrochemical business, Sasol, has faced an ongoing spate of issues since embarking on the construction of a new chemical production plant in Louisiana, USA. The past few years have been difficult for South Africa’s largest taxpayer, but the build is almost complete and the company is looking to restore confidence and build a culture of excellence as it pushes forward in search of growth.

It’s not business as usual for international petrochemical business, Sasol. The South African company, which has exposure in more than 30 countries, is going through a tumultuous period as it approaches full completion of its ambitious Lake Charles Chemical Project (LCCP) in Louisiana, USA. Founded in 1950, headquartered in Sandton, Sasol (South African Synthetic

Oil Ltd) is famous for using specialist technology to produce chemicals, oil and liquid fuels. Traditionally, the business – which employs some 31,000 people – has used coal liquefication techniques to produce synthetic oil, diesel and petrol fuels. But, following expansion globally, and the progress of the LCCP, Sasol’s culture has been dented and the JSE and NYSE-listed company faces new challenges.

LCCP has gone way over budget and beyond deadlines, the company has been forced to look into its carbon emissions, and employees have voiced concern over management decisions regarding share ownership. Of course, because of the size of investment, LCCP has been the immediate focus at Sasol. The project will now cost Sasol almost R13 billion, an increase of more than 50% on initial

// BY REDUCING EMISSIONS THROUGH ALTERNATIVE FEEDSTOCKS AND TECHNOLOGIES SUCH AS RENEWABLE ENERGY, WE BELIEVE OUR PRODUCTS, PRODUCED IN AN INCREASINGLY SUSTAINABLE MANNER, WILL SERVE AN IMPORTANT MARKET NEED, WHILE ADDRESSING CLIMATE REQUIREMENTS // projections. Shares hit a 20-year low when the company announced this news. In 2016, David Constable – thenCEO – said that a rise in cost to R11 billion was the ‘worst case scenario’. Sasol has highlighted weather delays, correction for duplication of investment allowances, higher contract expenses, unanticipated work and defective materials as reasons for expense hikes. Market commentators have looked on in shock and quickly pointed the finger at senior management - ‘it’s illustrative of lacklustre controls and oversight throughout the four to five years LCCP has been in design and construction. Sasol needs to address its leadership and culture’ said one analyst. Since 2016, Bongani Nqwababa and Stephen Cornell headed up Sasol as joint CEOs. While the company has always backed strategy of a joint role, many have cited differing strategy and implementation methods as strains on the business with one journalist even labelling the

organisation as the ‘Sasol Hydra’, after the two-headed mythical creature. But, in October, Nqwababa and Cornell stepped down under pressure from shareholders amid the rising cost crisis at LCCP following a lengthy internal review commissioned by the Board. The company’s Executive VP of its global chemical business, Fleetwood Grobler – a 35-year Sasol veteran – will take the reins as CEO. Upon the resignation of the joint CEOs, the Sasol board released a fairly damming statement: “It is a matter of profound regret for the Board that shortcomings in the execution of the LCCP have negatively impacted our overall reputation, led to a serious erosion of confidence in the leadership of the company and weakened the company financially.” Sasol is the largest contributor to tax revenue in South Africa and the world’s largest producer of fuel from coal. Grobler faces a big task to restore confidence in the business and steady the ship after the LCCP cost crisis. During his first speech at the 2019 annual financial results presentation, Grobler set out his position on taking the business forward. “I am well aware of the challenges that we have faced and also the challenges that lie ahead. “Recent events have created a significant amount of uncertainty at Sasol, through which the team has been remarkably resilient. “We need to be realistic that although today we address some key areas of uncertainty, we will have challenges ahead. Chief among these is the successful completion of the LCCP. “Many of our stakeholders are not interested in promises, they want to see delivery and I’m very much on that page,” he said. Even with the hurdles in America, Sasol has managed to continue bringing positive results. October saw the release of what Grobler termed ‘resilient results in a challenging environment’.

STRONG PERFORMANCE Overall, annual profit was up 5%. Headline earnings per share (HEPS) were up 12% to R30,72. Core headline earnings per share (CHEPS) were up 5% to R38,13. Cash generated by operating activities was up 20%. At Secunda, Synfuels Operations achieved an annualised run rate of 7,8 mt post the full shutdown. Natref achieved a production run rate of 637m³/h, the highest in last eight years. The HighDensity Polyethylene plant produced at the upper end of design capacity, and ORYX GTL achieved utilisation of 81% due to unplanned maintenance shutdowns. Mining productivity was up by 3%. Liquid fuel sales volumes up 2%, resulting from a strong Natref performance. On the sales side, the business continued with satisfactory results. Base Chemicals sales volumes up 4%, offset by softer commodity chemical prices. Performance Chemicals sales volumes down 3% impacted by 1st half 2019 external supply constraints and 2nd half 2019 softer macroenvironment in Europe and Asia. “For the financial year our foundation business delivered resilient results despite challenging conditions. The big capital spend on the LCCP is behind us and the finish

// WE NEED TO BE REALISTIC THAT ALTHOUGH TODAY WE ADDRESS SOME KEY AREAS OF UNCERTAINTY, WE WILL HAVE CHALLENGES AHEAD // line is in sight,” said Grobler. He went on to highlight progress in Louisiana, which he said was now 99% complete, with construction 96% complete and capital expenditure at $12.2 billion with projections placing the final cost between $12.6 and $12.9 billion. “The Ethane Cracker, which is the heart of the project, reached beneficial operation in August this year, a landmark milestone for us. With

the Cracker, LLDPE and EO/EG units operational, more than 60% of LCCP’s output is now online,” Grobler explained. “By the end of this calendar year, with the LDPE plant online, the LCCP will be around 90% operational, based on nameplate capacity or gross production; or around 85% operational, based on steady state external sales. The Ziegler unit – the largest of the remaining units – has now reached more than 80% construction completion. As mentioned earlier, we are focused on a balanced cost and schedule execution of these last units and hence, forecast beneficial operation of the ETO unit in Q3 FY20, and the Ziegler and Guerbet units in Q4 FY20. “Notwithstanding the significant and disappointing challenges related to LCCP, we believe that this world-scale facility significantly strengthens our position in the global chemicals market,” he said. Going forward, Sasol will look to complete in America without further

delay or cost increase. The company will also look to restore confidence in its brand, and will look to reposition itself as an energy company with a sustainable model. For this reason, Grobler is looking to create a new culture within the business while reducing carbon emissions. CULTURE SHIFT “LCCP has highlighted the importance of creating the right culture and control environment where open and transparent dialogue is encouraged. We as management need to change our conduct and set the tone for the rest of the organisation. This is completely in line with our ongoing culture transformation programme, and a critical aspect of new and enhanced controls being introduced throughout the group. “Nearly 85% of all our greenhouse gas emissions emanate from our South African operations, necessitating a particular focus here,” he said.

The company is looking for a 10% reduction by 2030, bringing greenhouse gas emissions down from 56 million tonnes of CO2 to 50 million. As the second largest emitter of greenhouse gases in South Africa, Sasol’s operations, particularly the Secunda chemical complex, pump out the same emissions as four power stations. Various ideas are being discussed for reducing the company’s footprint, and management will be incentivised for achieving various goals. Hermann Wenhold has been installed as Chief Sustainability and Risk Officer and he is certain that the business must change. “As we contribute and respond to the global transition to a lower-carbon future, business as usual is no longer possible,” he said. “Our business, particularly in South Africa, will be impacted in multiple ways. These include potential changing demand for our products, new policy requirements, higher costs from the transition to a lower-carbon future and physical climate change impacts on our operations. We are adapting as the transition takes place. Therefore, we have adopted a structured approach and are already executing on our emission-reduction ambitions. Our first goal is to reduce by 2030 the absolute GHG emissions from our South African operations by at least 10%, off our 2017 baseline.” Since 2005, Sasol has improved its energy efficiency by 21.7% in South

// I BELIEVE WHAT SASOL NEEDS TO MOVE FORWARD: IS REALISM, FOCUS AND DELIVERY AND I AM COMMITTED TO MAKING SURE THIS HAPPENS //

Africa and 19.5% globally. “By reducing emissions through alternative feedstocks and technologies such as renewable energy, we believe our products, produced in an increasingly sustainable manner, will serve an important market need, while addressing climate requirements,” adds Wenhold. Sasol will no longer embark on any new coal- and gas-to-liquid projects, and will not add new refining capacity. “We are working towards finding impactful, economic and socially acceptable solutions to reducing our emissions, especially in South Africa, where our challenge is elevated, given our coal-based operations,” reminds Grobler. With LCCP nearing an end, ensuring the thousands of employees around the world get on board with the company’s new strategy, and a resilient culture is fostered, Fleetwood Grobler must get his tactics right. Forbes Africa reported last year that ‘without a positive corporate

culture, many employees will struggle to find the real value in their work, and this leads to a variety of negative consequences for your bottom line’. Research from Deloitte backs this up, finding that 94% of executives and 88% of employees believe a distinct corporate culture is important to a business’ success. Grobler is clear what he thinks is needed to continue driving this South Africa success story forward. “I believe what Sasol needs to move forward: is realism, focus and delivery and I am committed to making sure this happens,” he said. With LCCP almost over the line, and with a new leader providing a single route forward, the future looks bright for Sasol.

Feature article on Sasol from the December 2019 edition of Enterprise Africa magazine.

Feature article on Sasol from the December 2019 edition of Enterprise Africa magazine.