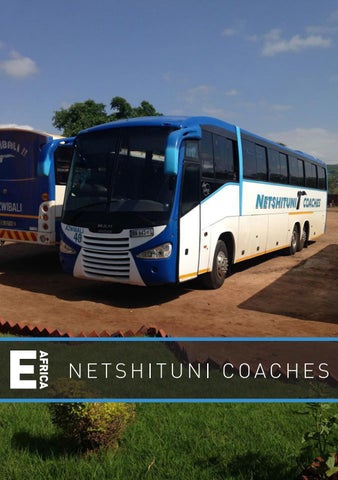 Proudly serving the Limpopo and Gauteng communities for 35 years, Netshituni Coaches is a family business that moves people. Transporting people to and from work and school, this company has a range of buses and coaches equipped with Wi-Fi and other modern amenities, and everything comes at affordable prices. As activity in the region grows, and the population continues to expand, Netshituni Coaches is perfectly positioned for growth in the fast lane. www.enterprise-africa.net / 3

Despite being the province with the third highest average salary rate – behind only Gauteng and the Western Cape – Limpopo’s wealth remains low. Unemployment sits at around 17%, better than the national average, but still leaving almost a million people jobless. The province – which is the fifth largest, with almost 50,000 square miles – looks to government and traditional business such as mining for work. Teachers, nurses, agricultural workers, tourism employees and infrastructural workers make up some of the key industries. Away from expensive data packages, fixed line internet provision is not widespread, especially in more rural areas, and public transport remains underdeveloped. Clearly, there is a need for the private sector to complement efforts of the public sector to modernise in the province. Creating jobs, bringing innovation, and helping to move people is vital if Limpopo is to thrive. This was the clear understanding of Andries Netshituni when he established his transport business in the province in 1984. Initially, the company was focussed on taxi services and small transport runs, aimed at getting students and teachers to school and nurses to hospitals from the rural areas.

These distances can be long, dangerous and difficult. At the time, Andries was probably unaware of the impact that his enterprise would go on to have. After initial success with the business, things began to grow and demand was far outstripping supply that Andries could deliver. It was clear that expansion was on the cards and, eventually, Netshituni Coaches was established in its current form, as an integrated transport business moving people all over Limpopo and Gauteng, helping them to get to work, school and to see family. The most important element of the business, and one which has never changed, has been doing things affordably. Andries recognised that people in Limpopo’s rural regions were not willing or able to fork out huge fees just to get to school or work, so he developed efficient routes and pricing to help the business run smoothly while meeting the needs of his customers. Unfortunately, Andries Netshituni passed away 2013 – his death was untimely – and the void at the head of the now well-established company was filled by his wife Luciana (Lucia) Netshituni. She went about continuing to grow the business while always remaining true to the core values installed by her husband. Today, a strong mission and ambitious vision drive this company forward.

// THERE IS COMPETITION BUT WE HAVE WI-FI ON OUR BUSES, WE HAVE PHONE CHARGING POINTS, WE HAVE AIR CONDITIONING, WE HAVE READING LAMPS, AND WE HAVE RECLINING SEATS //

BORN IN LIMPOPO “Safety, reliability, efficiency, and sustainability methods are principles our company live by,” states the company. “We ensure commuters are always comfortable in our fleet and that drivers are trained in customer services. We strive to be proactive and ever mindful of the changing transport needs of our passengers. Passenger safety is crucial. “We always strive for excellence in offering the best bus services with the highest degree of safe and efficient transportation at reasonable fares. We take pride in serving transport to the

// WE STRIVE TO BE PROACTIVE AND EVER MINDFUL OF THE CHANGING TRANSPORT NEEDS OF OUR PASSENGERS // communities around Venda and Gauteng and we look forward to doing so for years to come.” Currently, Netshituni Coaches operates around 60 MAN and Scania coaches that service routes all over Limpopo and Gauteng, and even into Zimbabwe. Expansion is on the cards with further routes being investigated into Mozambique, Botswana and Zambia. New coaches are also being prepared as the management looks to add to the fleet and bring new services online. “The villages are growing, they are building more hospitals and schools, and the population is growing. The current buses we have get very overloaded and are at capacity,” Luciana told Enterprise Africa. She said that new coaches, which will be improvements on the already very good fleet, will help to ease growing demand as the number of people moving between rural areas and commercial centres grows. “They will be added gradually and not all at the same time. There are many malls, schools and offices being built so depending on the population growth, we could add more than 20 to deliver an effective service – this is an ongoing investment programme.” From 1996 to 2016, the population in Limpopo has ballooned from around 4.5 million to around six million. But population density remains sparse, and away from busier towns, the transport connections are less common. The five district municipalities; Capricorn, Mopani, Sekhukhune, Vhembe and

Waterberg; offer large opportunities for companies that are knowledgeable and experienced in their sector. Netshituni Coaches, driven by national supplier Elegant Fuels, will continue to create jobs as its presence grows, adding to the 100 people already employed by the company. FUELLING ECONOMIC GROWTH “With each new coach we bring to fleet, we create three more jobs,” said Luciana. One of the key elements separating this local industry leader from the competition is the quality of buses. While mini buses operate routinely around the region, they simply cannot compare to the 50, 65, 70 and 120 seater luxury coaches employed by Netshituni. Most come with free Wi-Fi, LCD TVs, DVD players, CD players, stereo systems as well as air conditioning. Reclining seats, window blinds, and driver PA systems also help to make the service distinguishable against others. “There is competition but we

have Wi-Fi on our buses, we have phone charging points, we have air conditioning, we have reading lamps, and we have reclining seats. These are just some of the innovations that we install to make sure the passenger feels at ease on the bus and keep their lives going while they are on the bus. Netshituni is the only operator in Limpopo to offer these services,” states Luciana. “Some of the villages we provide for are very poor, and Limpopo is a poorer province, so our Wi-Fi does help the young people to get information while they ride. Yes, it helps us separate ourselves from the competition, but it is also helpful for the children to get more information for school or work. We have found that the Wi-Fi really does help them to research and acquire knowledge.” The service is especially handy for those on the job hunt, or those communicating with academic leaders. “We hope to continually convince

the customer that we are the best and convince them that we will deliver whatever they need to feel comfortable. We will always listen to the customer – that is the key to keep them coming back,” she says. ECONOMIC SPEED BUMP One bump in the road which is causing discomfort for most businesses is the unpredictable South Africa economy. Netshituni Coaches, although established for more than three decades and well-respected in its sector, is not shielded from the effects of a slack economic environment. Businesses and people have less money to spend, there is less confidence, and government spending, on things like road improvements and assistance for those in need, dries up. Following a slight uptick in Q2 of 2019, the country’s economy dipped once again in Q3, falling by 0.6%. Luciana Netshituni is concerned that this volatility will ultimately impact those

benefit and we can all make something of ourselves.” At the start of December, the announcement came through from the Department of Mineral Resources and Energy that 93 (ULP and LRP) and 95 (ULP and LRP) would both receive a 20 cent price increase. The fuel price is an obvious business-critical factor that must be considered by Netshituni Coaches, and it is passed on to the consumer. “We are expecting the diesel price to go up again and not come down anytime soon so we are unsure - it is scary. When you are providing a good service, but people are complaining about the prices which are out of our control, that is not nice. Most of the people we carry are workers and students and those people do not have a choice – they have to go to school or work. “We have not seen a drop off in passenger demand but it does affect the lower end of the market where earnings are small,” says Luciana. Right now in South Africa, big

corporate transport companies are having their reputations dragged through the mud. SA Airways and PRASA (which owns Autopax) have both entered business rescue and administration situations, and uncertainty about the sustainability of these entities is rife. For the smaller, efficient, effective, customer-focussed businesses – especially those that are expanding and creating jobs – there is light at the end of the tunnel, and although the economy still leaves hurdles in place, these businesses drive regional industry forward. “We strive to be proactive and ever mindful of the changing transport needs of our passengers,” says Netshituni Coaches, and as long as this continues, this is a business that will thrive.

Feature article on Netshituni Coaches from the December 2019 edition of Enterprise Africa magazine.

Feature article on Netshituni Coaches from the December 2019 edition of Enterprise Africa magazine.