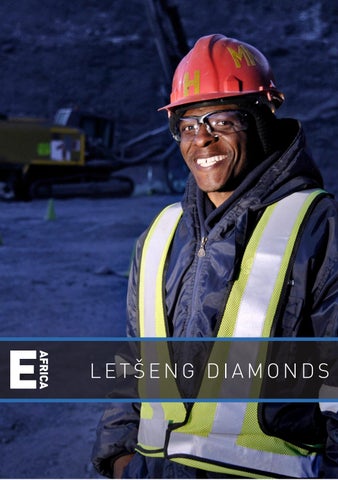 Another Decade of Mining that

Located high in the Maluti Mountains of the Kingdom of Lesotho, LetĹĄeng Diamond Mine has a long history of exceptional recoveries and huge volumes. Owner Gem Diamonds long-standing partnership with the Government and the people of Lesotho has just been renewed for a further 10 years, and will open up the continuation of a vital economic and social contribution to the country. www.enterprise-africa.net / 3

1957 was a hugely important year in Southern Africa’s history. It holds special significance for being the year that the General Assembly of the United Nations calls on South Africa to reconsider its apartheid policy, and was followed the next year by the country’s resumption of full participation in the UN. The year is also remembered for the series of shark attacks near Durban which occurred during Black December, while Die Stem van Suid-Afrika, written by Cornelis Jacobus Langenhoven, becomes the official National Anthem. A momentous 12 months, 1957 was also the year of the first diamond discovery in Lesotho. A small mining industry was then established, and during the 1960s and 1970s, Lesotho’s mines yielded several large gems and the industry employed thousands of people. PRODUCTIVE HISTORY Peter Nixon discovered the Letšengla-Terai Kimberlite Pipes, made up of the Main Pipe and the Satellite Pipe, in 1957 while working in the area. The mine was officially opened in November 1977, closing after five years in 1982. The final production total was 272,840 carats, recovered from 9.4 million tonnes of kimberlite, mainly sourced from the Main Pipe.

Letšeng Diamonds was formed in 1995 as a partnership between industry investors (76%) and the Lesotho Government (24%). The mining rights for the Letšeng Mine, situated high in the Maluti Mountains of the Kingdom of Lesotho, were acquired by Letšeng Diamonds in 1999, and sparked the reconstruction of the mine’s infrastructure in 2003. Letšeng Diamonds today has two shareholders, with Gem Diamonds Limited owning 70% and the Government of the Kingdom of Lesotho retaining the remaining 30%. Operated by De Beers during its original operational lifetime between 1977 and 1982, Letšeng reopened in 2004 and was acquired by Gem Diamonds in late 2006 for US$118.5 million. Letšeng continues to deliver exceptional returns for its shareholders, with annual production rising since the takeover from 55,000 carats in 2006 to over 126,000 carats per annum by the end of 2018. The mine currently processes around 6,439,000 million tonnes of ore annually. “Letšeng Diamond Mine is famous for its large, top quality diamonds,” the company says, “with the highest percentage of large (+10.8 carat) diamonds of any kimberlite mine, making it the highest dollar

// I AM VERY PROUD OF THE LETŠENG MINE. OF ALL MINES IN THIS COUNTRY, LETŠENG IS THE ONLY ONE THAT THAT STICKS TO THE PROMISES AND COMMITMENTS IT MAKES TO THE PUBLIC // value per carat kimberlite diamond mine in the world.” “Not only are Letšeng’s diamonds the highest valued kimberlite diamonds in the world, they are also from one of the highest diamond mines in the world, at an altitude of over 3100 metres.” As much as anything else, Letšeng is also renowned for its production of historic diamonds. In August 2011, a 550-carat white diamond, the Letšeng Star, became Letšeng’s fourth major recovery since Gem Diamonds’ 2006 takeover. It was preceded by the 478-carat Leseli la Letšeng (‘Light of Letšeng’) in 2008, the 493-carat Letšeng Legacy in 2007 and the 603-carat Lesotho Promise in 2006. In addition, the 601-carat Lesotho Brown was recovered in 1967. Letšeng has now produced five of the largest rough white gem diamonds on record, when in January 2018, a 910-carat white diamond, the Lesotho Legend was recovered. This exceptional top-quality diamond is the largest to be mined to date and highlights Letšeng Diamond Mine’s unsurpassed quality. “This is a landmark recovery for all of Gem Diamonds’ stakeholders, including our employees, shareholders and the Government of Lesotho, our partner in the Letšeng mine,” said Clifford Elphick, Letšeng’s Chairman.

MINING LEASE RENEWAL Gem Diamonds Limited was delighted to announce in October that the mining lease for the Letšeng mine had been renewed by the Government of the Kingdom of Lesotho for another 10 years, the maximum period allowed under the 2005 Mines and Minerals Act. The respective shareholding in the Letšeng mine will remain unaltered in the wake of the deal, with a slight increase in the royalty payable in respect of diamonds sold by Letšeng - from 8% to 10%. Letšeng will also be granted a higher number of work permits in respect of foreign nationals increases, which may prove invaluable in filling any skills gaps at the mining operations. The renewal signalled the continuation of a long-standing, mutually beneficial partnership between the Company and the people of Lesotho,

and represented a firm endorsement of Gem Diamond’s long standing and very significant economic and social contribution to the country. Gem Diamonds continues to invest millions of dollars in corporate social investment (CSI) initiatives, which have included the Letšeng Dairy Project, the construction of classrooms and a footbridge in Pae-laItlhatsoa, as well as the construction of a police station in Phutha-lichaba. At its opening ceremony at Pae-la-Itlhatsoa, the Hon Minister of Mines commented: “I am very proud of the Letšeng mine. Of all mines in this country, Letšeng is the only one that that sticks to the promises and commitments it makes to the public.” He added: “I so wish other mines could learn from Letšeng, that it is a great thing to work well with the communities. They truly are part of this community.”

Gem Diamonds recognises its responsibility to support the wellestablished cultures and social structures in the local community which surrounds its operations. “Gem Diamonds is proud of our long-standing partnership with the Government and the people of Lesotho,” added Clifford Elphick. “The mining lease renewal will allow the Letšeng mine to continue to make a very significant economic and social contribution to the people of Lesotho. Gem Diamonds would like to thank the Government of Lesotho for its ongoing support and we look forward to continuing the shared value creation long into the future.”

Feature article on Letseng Diamonds from the December 2019 edition of Enterprise Africa magazine.

Feature article on Letseng Diamonds from the December 2019 edition of Enterprise Africa magazine.