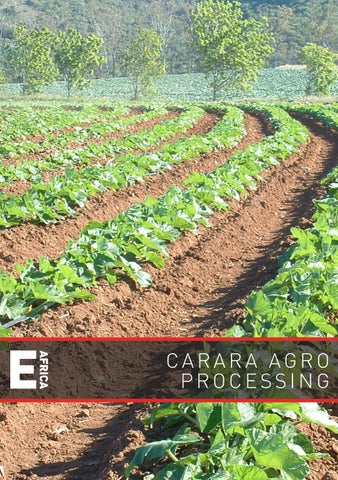 The Pick of the

A product range headed up by the beautiful red cherry pepper, Carara’s firm focus on quality, reliability and consistency has enabled the grown substantially over the course of 12 years. Proud producers of a superior range of pickled products, Carara’s wares are a delicious addition to nearly any dish and created to the highest of standards.

Carara this year celebrated the milestone of its 15th year of production, formed midway through 2004 by a group of ex-Zimbabwean farmers who moved south to avoid the political turmoil in their homeland. Setting up a modern, state-ofthe-art processing facility in the small but appealing city of Grahamstown in the Eastern Cape, such a long and illustrious lifetime must have seemed a long way off for the group, who quickly began building relationships with local farmers for the supply of peppers, patty

pans and jalapeños. Subsequent expansion to the facilities has resulted in the installation and commissioning of a canning line, enabling Carara to produce a pasteurised, preservative-free product. “Carara has a wealth of experience, and the capacity to produce quality pickled food products in a controlled environment,” says the company. “We would like to remain recognised internationally as a quality organisation, specialised in Cherry Peppers and other pickled and pasteurised products.”

COMMITTED TO DEVELOPMENT Once it had placed its roots firmly in the soil of the Eastern Cape, Carara Agro Processing set about exporting its pickled products around the world, and a period of sustained growth coupled with high demand saw Carara open a second processing facility, the Natal Pepper Company in KZN, in which Carara is a 50% shareholder. To this day, quality and speed of delivery remain primary concerns throughout the company and its processes. At peak production, Carara is the single largest employer in

Keeping our design solutions simple & usable, creating a winning environment that allows for partnerships in worldwide production distribution. ViscoDisc™ is a South African innovation designed & developed to solve a packaging problem. It has successfully achieved its objectives, with a string of added bonus benefits that puts this simple looking invention into a class of its own. This product is the ViscoDisc™ insert, which has been very successful in solving the perennial question of how to stop bottled produce from protruding above its preserving liquid.

For more information on ViscoDisc and their products go to www.viscodisc.com

Grahamstown, with a full staff complement approaching 1200. Taken together, Carara and its subsidiary facilities have created approximately 2875 factory and 3000 on-farm seasonal jobs. Alongside new equipment and improved efficiencies, Carara is looking at new product lines to bolster its exciting range and boost the productivity of its facilities. “We’re always looking for new products, especially those that can smooth our production periods,” explained Managing Director, Mike Duxbury. “We’re a huge seasonal production facility and we want to spread our production time as long as possible.” Recent exploration into products that can help in this regard have seen Carara branch into sweetheart peppers, fresh garlic and roasted vegetables. “The sweethearts can come in in January, February and March and we can get them in before the pepper season. It’s been fairly successful; we increased production from four tons to 150 tons and we’ve sold 40% of that this year already. We plan to increase production for next year because we believe in the product,” Duxbury detailed. VITAL TO GDP South Africa’s exports represent a crucial element of the country’s gross domestic product (GDP) mix. The country has one of the 40 biggest export economies in the world and its chief exports include metals and minerals, coal, cars and associated products, and food stuffs such as fruits, vegetables, oils and wine. Agricultural exports represented 10.8% of total South African exports in 2017, according to Fresh Plaza, and amounted to R127.69 billion. Interestingly, South Africa is the second largest exporter of citrus fruit in the world, even though it is ranked 14th in citrus production; these exports amounted to R18.6 billion. Fresh Plaza revealed the Netherlands to have been

SA produce’s number one importer in 2017 with spends totalling R11.56 billion. Second was the UK at R9.7 billion, and somewhat surprisingly, Mozambique third at R6.5 billion. Meanwhile, Fin24 pointed out that in 2018, South Africa’s agricultural exports grew by 7% year-on-year to US$10.6bn, a record level in a dataset starting from 2001. “From a destination point of view,” Fin24 agreed, “the African continent and Europe continued to be the largest markets for South Africa’s agricultural exports, collectively absorbing 66% of total exports in 2018, measured in value terms.” It too highlighted beverages, fruit, vegetables, wool, sugar and grains as the products leading the charge to foreign shores, while reporting Asia

// WE WOULD LIKE TO REMAIN RECOGNISED INTERNATIONALLY AS A QUALITY ORGANISATION //

to also be an important market for South Africa’s agricultural exports, responsible for a 25% share in 2018. Agro-processing is a hugely important sector for the country, contributing large amounts of total GDP, supporting thousands of jobs, and contributing to the country’s trade deficit. The unfavourable weather conditions which prevail in South Africa must be carefully mitigated, however, as heatwave conditions and the late onset of rains have caused local supply failures in many parts of the country. SHINING EXAMPLE A serious multi-year drought in parts of the Northern and Eastern Cape provinces has seen a number of small towns threatened by total water supply failures and livestock farmers facing financial ruin. Cape Town’s experience of extreme ‘Day Zero’ supply restrictions only adds to these fears, while weather forecasters seem unable to make reliable predictions more than a few weeks in advance. Carara is a premier example of a successful agro-processing

business, an industry leader and an example to follow. President Cyril Ramaphosa signalled in the 2019 State of the Nation Address that potential expansion in agricultural production in South Africa would mainly be on export-oriented products, which will have been music to Carara’s ears. “We can’t complain,” summed up Duxbury, “the business is growing and remains financially sound. We are in a very fortunate place. “We’ve developed a really strong grower-factory relationship without which we wouldn’t succeed. We know that without produce, we are not a business and we need quality fruits to provide the kind of quality our clients want. We put a lot of effort into giving back to the farmers.” As long as the water crisis can also be managed successfully, and exports continue to flow as a result, there is no reason why Carara can’t grow further and take a bigger chunk of its chosen markets.