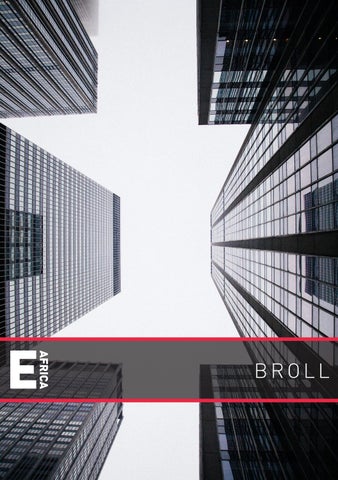 These are hard times in the commercial property market, and pan-Africa’s largest property services company, Sandton-based Broll Property Group, is hitting back with new technology and sharpened client-focused strategies. “You have to be tougher than the circumstances you find yourself in,” says Nkuli Bogopa, Managing Director of Broll’s Investor Services. 2 / www.enterprise-africa.net

South Africa’s listed property market is stuck deep in the ruts of a challenging landscape. The environment is tough, there’s pushback on pricing, deals have mostly dried up, vacancies are rising and lease renewals challenging. It’s a situation that finds Nkuli Bogopa, Managing Director of Investor Services at the Broll Property Group, resolute and quietly positive. “You have to be tougher than the circumstances you find yourself in,” she says. As the largest independent panAfrican commercial property services company, with offices in the major cities of South Africa and operations in 16 other sub-Saharan countries, Broll lives at the coal face. Founded in 1975, the Sandtonheadquartered business is delivering solutions to achieve value and improved profitability to over 21m m2 of occupied space, 12m m2 of managed facilities and 7.5m m2 of managed property assets. WIDE SPAN: BIG NUMBERS It is a highly integrated operation, with a hands-on management and staff of 2300 overseeing a portfolio including property broking, valuation and advisory services, shopping centre management and retail leasing as well as occupier services. The rollcall of numbers is hugely impressive; 400-plus shopping centres, 30,000 tenants, and 6000 leases concluded in the last 12 months. But it’s a bruising, competitive environment, one in which Broll is responding with a series of strategic fine-tunings, including advanced

// THE TENANT IS KEY, AND WE WANT A FOCUS ON THE TENANT’S EXPERIENCE // 4 / www.enterprise-africa.net

in-house IT, greater leverage, and increasing an already storing focus on client-specific solutions and support. “We must constantly ensure that we are working closely with our clients, understanding and looking after their needs, and constantly re-inventing ourselves in terms of our service offering.” With a flat management structure, it’s an offering streamlined by a culture of fast decision making. Bogopa, Director of Investor Services for the past 13 months, explains. “While I am MD of the Property Management division, I have an executive team reporting to me, and decision making regarding what is going in the various portfolios is generally discussed and agreed upon centrally, rather than in one place.

// MORE THAN INVESTIGATING NEW TERRITORIES, WE ARE LOOKING TO FURTHER PENETRATE THOSE TERRITORIES WE ARE ALREADY IN //

CLOSE CLIENT INTERACTION “As the CEO, Malcolm Horne is very involved, with an on-the-ground ear in terms of what is happening throughout the organisation and close interaction with clients. We don’t want to lose touch with our clients, something we feel very strongly about. “The other major new input is increasing the leverage from all divisions, along with the key capabilities and facilities lying within the organisation.” The sweep and depth of the Broll portfolio is also seen as a potent new business driver. “It’s a great strength and we are using it. “When presenting to a client, we can say that while we can take care of your property management needs, we have equal strengths and capabilities in other related areas such as facilities management, valuations, and occupier service management. “As a business it’s forcing us to make sure we are providing comprehensive solutioning for a client.” While the client list includes top names, Broll is a brand for all sizes. “We enjoy a number of Blue-Chip companies and look to expanding in this segment - not least because this re-

IT BREAKTHROUGH Three years ago Broll moved to develop an in-house IT system that enables its development team to analyse and make up for the gaps in bought-in competitor systems. Such is its success that Broll is now selling the software as a stand-alone service. “Among the benefits this has brought is greater flexibility and the opportunity to white label and customise the system to suite our clients,” says Bogopa. “It also reduces our costs, and makes it easier to track what is going on in terms of procurement spend in maintenance and repairs. Improved efficiency is always something we are looking for on an on-going basis.” Turning to the challenging climate of the property sector, she says many companies - “to save a few bucks” - are taking their business away from specialists and turning to insourcing, sometimes to return. “It’s a cyclical trend, something that happens in our life-cycle, and it’s prevailing at the present time.” Another current trend is the increasing time being taken for decision taking, with the development landscape the longest to see through.

enforces our credibility and capabilities. “But in the times we are in, Blue-Chip companies are not our only focus. We also have a lot of individual investors who are much smaller in nature, and we value their business equally. At a time like this, any business is good business.”

THE FUNDING FACTOR “Development relies on factors such as feasibility and funding. When funding comes through, the landscape changes, only to change again if you are unable to secure and hold on to tenants while you are waiting for the funding to be approved.” And tenancy retention and income are now major issues. “We are seeing reversions of rental which means the big national tenants for example, are becoming stronger in terms of their negotiations, which are now very vigorous. So our landlords have to be a lot more flexible and amenable. “We are also seeing the whole dearth of the office market. It’s a real problem, and one I don’t thing is going to change. For the foreseeable future it will continue to wind down.” Broll’s response here as elsewhere, is a heightened attention to circumstance, need, and state-of-art technology. “There is now a priority for a focused attention on tenants, and what actually

works for them in their buildings. “That whole tenant experience is critical, and we are gearing ourselves up from a customer-centric point of view with regard to our technology, mobile apps and so forth.” From a tenant inter-action point of view, she believes this will make it easier to do business with Broll. “For example, a call-centre will allow a tenant to call indirectly and say, ‘I have a problem; can you resolve it?’ “The tenant is key, and we want a focus on the tenant’s experience. With the volume of vacancies we are seeing, and the difficulties in filling those gaps, retention of those tenants becomes central.” BRAND CONSCIOUSNESS While Broll’s exceptional resource and reputation make for a strong brand asset in hard times, Bogopa enters a note of caution. “It can also lead to complacency. We must not come across as arrogant,

// YOU HAVE TO BE TOUGHER THAN THE CIRCUMSTANCES YOU FIND YOURSELF IN // we have been in the business for a long time and there is a lot of competition. “So we are acutely aware that while our long establishment has been a strength, it cannot be the only one we rely on.” Brand strength was enhanced six months ago when the Broll Property Group entered into an exclusive affiliate arrangement with Cushman and Wakefield, the Chicagoheadquartered leading global real estate services company. The partnership will provide clients with an integrated platform covering the entire sub-Saharan Africa region, optimising Broll’s knowledge of the African markets with the weight and expertise of a global player – “integrated

access to a phenomenal global platform,” said CEO Malcolm Horne. Dominant in South Africa and a major player in 15 African countries, might this mean Broll will be looking to add to its geographical portfolio? “More than investigating new territories, we are looking to further penetrate those territories we are already in, where we are not currently offering a full suite of services,” says Bogopa “We are already doing business with them from a valuation point of view, but we have not expanded the service offering of property and facilities management, and these are the areas we will be focusing on in the next year, and where we see the opportunity.” RISING STAR Listed in Forbes Africa 2013 as one of South Africa’s young talent to watch, following her nomination as a Rising Star in the Mining and Industrial Sector – she was at the time Group Property Manager at Rio Tinto – and

currently leading the South African Institute of Black Property Practitioners, Bogopa says her role as Managing Director of Investor Services places her in an environment with a strong entrepreneurial spirit - “one that challenges you in your overall thinking. “I have previously been involved in very technically specific fields, and my role here is an over-arching business management. It’s a challenge I am enjoying.” With the South African economic outlook for 2020 gloomy, it’s part of a wider challenge that Africa’s most advanced nation cannot shirk. GDP is shrinking, the economy is stagnant, there’s a substantial budget deficit and state-owned enterprises are failing. THE POWER OF POSITIVE THINKING And yet? Global research released by YouGov in September showed 64% of South Africans view themselves as optimists, 8% above the global

average. Positivity is clearly a musthave national resource. “We definitely have a positive outlook,” says Bogopa, “and we have been able to sustain ourselves in terms of the numbers we employ. “Tough times require one to become more resilient, and resilience is something we drill into our teams and the management of the organisation. You have to be tougher than the circumstances you find yourself in.” The arrival of a new President has given a “glimpse of optimism for a new type of economic outlook coming through. “It’s about re-inventing yourself in difficult times, and maybe the success of the Springboks in the Rugby World Cup and the crowning of Zozibini Tunzi as Miss Universe has given us a new kind of hope!”