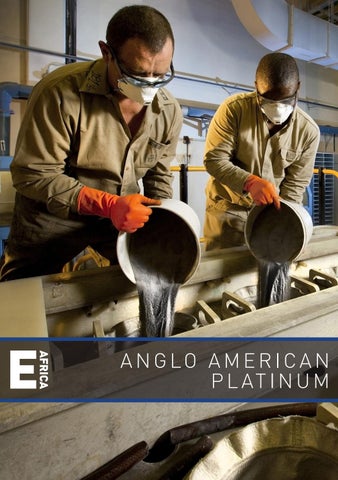 Production and finances are strong at Anglo American Platinum. The company has also started the process of being audited by the Initiative for Responsible Mining Assurance’s (IRMA) ‘Standard for Responsible Mining’ in Zimbabwe. Combine this with the news of a newly agreed wage deal with unions and you have a business with much to be excited about in the future. 2 / www.enterprise-africa.net

Most know platinum as the valuable silver-coloured metal used to forge jewellery including rings and necklaces. But platinum is so much more than decorative; it is in fact one of the most important precious metals in the world. With the chemical symbol Pt and atomic number 78, this noble metal is popular because of its strength resisting corrosion. Today, platinum’s most important use is in vehicles as a catalytic convertor. Discovered in South Africa in 1924 in the Bushveld Igneous Complex, platinum is now one of the country’s chief exports and South Africa is the world’s largest producer, exporting around a quarter of total global exports in 2018. The clear-cut industry leader in this space is Anglo American Platinum, a business rooted in South Africa and recognised as the world’s largest primary producer of platinum group metals, offering up more than 35% of the world’s annual supply. Established in 1995 in its current form, and part of the wider JSE and LSE-listed Anglo American group which is more than 100 years old,

// THIS IS VERY MUCH A STRONGER BUSINESS TODAY BECAUSE OF THE ACTIONS WE HAVE TAKEN IN RECENT YEARS AND I’M PLEASED TO SAY THAT THERE ARE FURTHER OPPORTUNITIES TO UNLOCK THE FULL POTENTIAL FROM OUR OPERATIONS // 4 / www.enterprise-africa.net

Anglo American Platinum employs some 30,000 people across various divisions and mining operations. 2019 has been a turbulent year for the company, characterised by both highs and lows. Decent financial and production results, along with global recognition for responsible mining, have been diluted by the threat of strikes which could damage the reputation of the miner, already hurt by strikes of 2012 and 2014. But, with looming industrial action now seemingly averted, the time for Anglo American Platinum to push forward is here. In November, the company signed a three-year wage agreement with the Association of Mineworkers and Construction Union (AMCU), the National Union of Mineworkers (NUM) and UASA – The Union (UASA) which would see employees receive an annual increase of R1000 per month in basic pay in years one, two and three for bargaining unit employees, or 5.5%, whichever is greater for each year of the agreement. In addition, the base on which salary-related allowances and pension contributions are calculated will increase over the three-year period to bring it back in line with basic wages; and an ex-gratia payment of R1000 in July 2020 and R1500 in July 2021 will be delivered. For Anglo American Platinum, this change results in an increase of the total labour cost-to-company of 7.4% in year one, 6.1% in year two and 6.3% in year three - 6.6% on average over the three years. “We are very pleased to have reached an agreement, and we welcome the collaborative and constructive engagements with the unions throughout the process,” said Chris Griffith, CEO of Anglo American Platinum. “We believe this agreement will ensure the business can remain sustainable through the typical PGM price cycles, while our employees will benefit from meaningful pay and other increases.”

RESPONSIBLE MINING In May 2019, Anglo American Platinum opened its new smelter at the Unki Mine in Zimbabwe. This customdesigned, cost-efficient facility is set up to meet the current output at Unki but can be upgraded in the future should the need arise. The equipment smelts Unki concentrate resulting in furnace matte which is crushed and then moved to South Africa for further processing. Construction was announced back in 2015 and heat up began in August 2018. Upon opening, Unki Mines Chairman James Maposa said: “The Unki smelter is a strategic investment for our company and will increase our processing capacity significantly. Unki has heeded the government’s beneficiation call, a key pillar of Zimbabwe’s goal to create value, employment and accelerate industrial development from its mineral resources. Anglo American Platinum acknowledges that we have a responsibility to contribute to the country’s economic and social development, and to ensure that our contribution here addresses key national priorities.” And the success has continued at Unki. In September, Anglo American Platinum announced that the mine would be the first in Zimbabwe to commit to independent auditing against the Initiative for Responsible Mining Assurance’s (IRMA) ‘Standard for Responsible Mining’. This standard looks at 26 areas of mining including working conditions, human rights, community and stakeholder engagement, environmental impact, and planning and financing reclamation and closure, performing well in its initial self-assessment. Anglo American plans to measure many of its operations against the IRMA standard, aiming to have all assessed against credible responsible mining standards by 2025. Chris Griffith said that the assessment helps to keep mines

IRMA is a voluntary certification system meant to complement strong laws and government oversight, it is also the world’s first and only global definition of what constitutes leading practices in social and environmental responsibility for large-scale mining operations developed through consultation with a range of stakeholders. It is the product of ten years of collaboration between our stakeholders that seeks to emulate for mining what has been done with certification programmes in fair-trade agriculture, responsible forestry and sustainable fisheries, as examples. “We are extremely pleased to see Anglo American’s Unki mine take the lead and begin the thirdparty certification process. We hope that this paves the way for others across the industry to make a similar commitment.”

and sustainable mining, and we look forward to continue leading the way for our other mining operations.” Anglo American CEO, Mark Cutifani agreed, saying: “We have a longstanding commitment as a leader in responsible mining, with numerous examples of our progressive business decisions across many decades. We are pleased that Unki will be the first mine in the world to publicly commit to a third-party audit to determine its performance against IRMA’s Standard for Responsible Mining. As our customers and end consumers who rely on our metals and minerals rightly expect the highest standards of ethical production, we will be putting all our managed mines through such rigorous certification processes by 2025.” Aimee Boulanger, Executive Director of IRMA commented: “While

© Anglo American - Tumela Mine One Shaft

ONGOING STRENGTH In July, Anglo American Platinum announced strong interim results amid tough market conditions and a difficult economic back drop in South Africa. The highlights included EBITDA growth of 82% to R12.4 billion, headline earnings per share up 120% to R28.15 per share, return on capital employed (ROCE) increased to 45%, and free cash flow from operations increased by 126% to R4.3 billion. Importantly, the company also reported zero fatalities in the first half of the year, with total recordable injury frequency rate (TRCFR)

declining to the lowest on record. “We are pleased to report that Anglo American Platinum has delivered safe, responsible and profitable production in H1 2019. We are committed to eliminating fatal incidents on a permanent basis and ensuring safe operations, while delivering leading returns in the PGM industry. Thanks in part to strong fundamentals for the PGM basket price, we have increased EBITDA by 82% to R12.4 billion, resulting in an increase in the EBITDA margin to 32% and doubling our return on capital employed (ROCE) to 45%,” said Griffith.

“This is very much a stronger business today because of the actions we have taken in recent years and I’m pleased to say that there are further opportunities to unlock the full potential from our operations,” he added. Platinum Grade Metal (PGM) production was consistent throughout H1 and only decreased by 2% on the previous year, thanks to Eskom’s power disruptions in Q1. Anglo American Platinum’s PGM portfolio includes platinum, palladium, rhodium, gold, iridium and ruthenium metal in concentrate.

// WE ARE EXTREMELY PLEASED TO SEE ANGLO AMERICAN’S UNKI MINE TAKE THE LEAD AND BEGIN THE THIRD-PARTY CERTIFICATION PROCESS. WE HOPE THAT THIS PAVES THE WAY FOR OTHERS ACROSS THE INDUSTRY TO MAKE A SIMILAR COMMITMENT // 6 / www.enterprise-africa.net

// WE ARE IMMENSELY PROUD OF THE WORK THE TEAM HAS BEEN DOING AT UNKI ON RESPONSIBLE AND SUSTAINABLE MINING, AND WE LOOK FORWARD TO CONTINUE LEADING THE WAY FOR OUR OTHER MINING OPERATIONS // “We are committed to the next phase of value delivery and work is underway to realise value at existing operations. Our aim is to achieve, and

beat, world best operating practices and implementing FutureSmartTM technology and innovation to enable material efficiency improvements. Market development continues to progress, with a number of achievements made in H1 2019, including investments into the green economy and new product launches to promote platinum demand. Finally, project studies continue to assess how to unlock optimal value from Mogalakwena and the Mototolo/Der Brochen ground,” said Griffith. In September, on release of the company’s third quarter production report, positive progress continued. Zero fatalities occurred, PGM production consistency was maintained at 1,141,200 ounces, and the PGM production outlook for 2019 was maintained between 4.2 - 4.5 million ounces. The only major identified threats for the final quarter were

performance of power utility Eskom. Production of this precious and much-needed metal is not easy. It requires significant monetary and time investments, and operations need constant nurturing to ensure efficiency. Anglo American Platinum has mastered this practice and with many expansion plans in place to ensure safety, environmental and production statistics, Anglo American Platinum is still positioning itself as a business which leads its industry, and works as an example for others to follow.