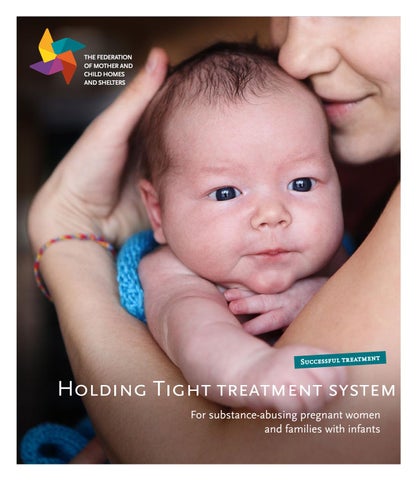 THE FEDERATION OF MOTHER AND CHILD HOMES AND SHELTERS

Treating pregnant women is worthwhile Substance abuse endangers the development of the newborn child. Mother and baby can and must be treated together.

Around 6 per cent of pregnant women are

Treating expectant mothers and families with

substance-dependent. The development of 3,600â&amp;#x20AC;&amp;#x201C; 6,000 foetuses is endangered annually due to substance abuse. Around 600 babies are born with various degrees of damage due to alcohol abuse alone.

infants where substance abuse is an issue is possible and worthwhile. However, this requires sufficiently long and intense treatment in a special treatment system that has been developed especially for this target group.

We rehabilitate 250 families annually. The Holding Young women in particular are using increasing amounts of substances. Nowadays approximately one-third of all drug-users are female. The motherâ&amp;#x20AC;&amp;#x2122;s substance abuse is the most common reason that small children are taken into care in Finland.

Very good results The Holding Tight treatment system is the only one of its kind in Finland, and it is also globally unique. Rehabilitation reduces the amount of children who are taken into care and gives babies a chance to live with their parents.

Most mothers in mother and child home rehabilitation live sober lives with their children.1 2/3 of mothers in mother and child homes and 3/4 in open care units rehabilitate so well that their children do not need to be taken into care. The children of families in mother and child homes were judged by a child psychiatrist to have attained normal levels of development at 1 year old and they were remarkably healthy, given the start they had in life.2 Mothers have avoided serious relapses into substance abuse and their values have moved in a healthy direction. Mothers thought that the rehabilitation enabled them to change their lives and increased their sense of safety. A large proportion of children were able to stay with their parents.3

woul d be no

Reha bili tation is the chea per op tion

The price of no rehabilitation Placing a child in a professional family home or institution costs 60–90,000 euros/year The mother’s substance abuse and pregnancy complications cost 36,000 euros Taking a child into state custody and long-term care until they turn 18 years old costs 1–1.6 million euros The mother’s marginalization until she is eligible to receive an old-age pension costs 1.1 million euros

The price of mother and child home rehabilitation

Figures based on calculations by researcher Anna Leppo

The total cost of rehabilitating a mother and child is 180,000 euros/year

The costs of the treatment system are approximately 8.5 million euros per year. That pays for the rehabilitation of 250 families. The Holding Tight treatment system is an investment that shows returns, not just on a human level but financially too.

Municipalities save approximately 4 million euros in costs related to the harm caused by substance abuse by rehabilitating substance-abusing mothers and around 160 million euros by the time they are eligible to receive an old-age pension.

The cost of placing this number of children in care

Municipalities save around 105 million euros

outside the home would cost municipalities 12.9 million euros in their first year alone.

by the time the mother is eligible to receive an oldage pension when she is rehabilitated to become fit for work.

Municipalities save around 163 million euros from the fact that a significant proportion of children from families in rehabilitation do not have to be placed in long-term care after the rehabilitation is complete.

An irreplaceable time effect on the child’s overall development and brain development in particular. The child’s comprehensive development is based on interaction between the parent and baby. A mother’s substance abuse problem puts an interactive relationship with the baby at risk and makes mistreatment more likely. Expectant mothers and young families with substance abuse problems are in a high-risk group due to an accumulation of problems. These can arise

Pregnancy and early childhood have a decisive

The goals of the Holding Tight treatment system Discovering a parental role motivates sobriety. Understanding and responding to the babyâ&amp;#x20AC;&amp;#x2122;s needs creates a relationship between the baby and parent. Parenthood becomes rewarding.

preventing and minimizing foetal damage by supporting sobriety during pregnancy supporting the parentsâ&amp;#x20AC;&amp;#x2122; sobriety after the baby has been born creating positive interaction between mother and baby good care and healthy development of the baby mastering everyday skills so that the parent can cope in daily life with their child

I got a chance I’m so anxious that I can’t breathe. I’m scared. I don’t want to use anything ever again. I hate this stuff that I need, I don’t want it any more. Ever. Then the withdrawal symptoms begin and I give in. I sit on the floor alone and cry. The baby turns inside me and I cry even more. Why can’t I stop? What’s going to become of us?

otic. I had tried to stop using a few times before and every time I failed I fell into a darker place. I was anxious and afraid, and I was wondering if someone like me even had the right to have a child. Was it ethically and morally right? I sought help though, I explained my situation and threw myself into this unknown and scary world of professionals who might judge you and give you bad looks. The child’s father was in jail and nearly all my friends were drug addicts. I tried harder than ever. I cried and asked the baby to forgive me. It was the worst time in my life. I thought I was some kind of monster, the lowest of the low.

When the baby was born and I was finally free of the withdrawal symptoms we got a place in a Holding Tight mother and child home. I was incredibly happy, but at the same time completely lost in the face of a new life. The baby was a mysterious creature, I fell in love with him at first sight but he was demanding and cried a lot. I was up all night shushing him and dancing with him in my arms. It felt safe and nice that I wasn’t alone as there was always a care worker there too. We were being looked after. It was even better to receive good feedback: “You’re do-

ing a good job and look after your child tenderly. You’re a good enough mum.” There were pros and cons with living in a community. I made good friends and got peer support. I got honest feedback from other people. In 6 months I saw my friend relapse and her baby lost its parents. Still I believed in my own sobriety and I didn’t falter. I had already survived.

When I moved from the mother and child home back to my own life I was weak again. Luckily the visit to the open care unit was scheduled for the next day already. We weren’t left alone, me and the baby. Together with the care workers we looked for solutions to my crisis. And we found them. I was humbled by the setbacks I’d endured, and at last I saw myself just as I was: not only strong or weak. Of course I would survive, if I was honest with myself. I attended the open care unit for many years. I stopped rushing around. It felt good to be part of the open care unit community and visits there gave my days some structure. We were cared for, and seen for what we were. My restless mind found some balance. I was happy enough and I had faith in myself. It was time to move forward. Iiris, Rehabilitated mum

When I discovered that I was pregnant my life was cha-

The Federation of Mother and Child Homes and Shelters Asemamiehenkatu 4 A | 00520 Helsinki www.ensijaturvakotienliitto.fi

Substance abuse endangers the development of the newborn child. Mother and baby can and must be treated together. Pregnancy gives women a special opportunity to resolve their substance abuse problems and change their lives. The Holding Tight treatment system is the only one of its kind in Finland, and it is a globally unique. Rehabilation reduces the amount of children who are taken into the care and gives babies a change to live with their parents. 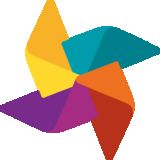