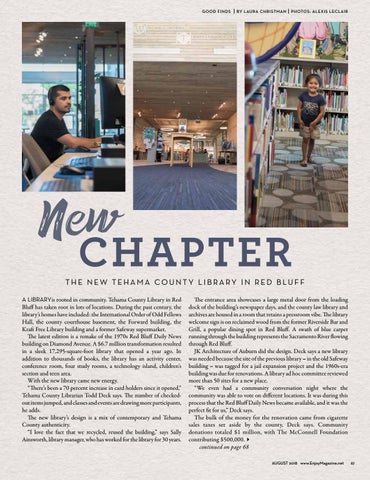 THE NEW TEHAMA COUNTY LIBRARY IN RED BLUFF A LIBRARYis rooted in community. Tehama County Library in Red Bluff has taken root in lots of locations. During the past century, the library’s homes have included: the International Order of Odd Fellows Hall, the county courthouse basement, the Forward building, the Kraft Free Library building and a former Safeway supermarket. The latest edition is a remake of the 1970s Red Bluff Daily News building on Diamond Avenue. A $6.7 million transformation resulted in a sleek 17,295-square-foot library that opened a year ago. In addition to thousands of books, the library has an activity center, conference room, four study rooms, a technology island, children’s section and teen area. With the new library came new energy. “There’s been a 70 percent increase in card holders since it opened,” Tehama County Librarian Todd Deck says. The number of checkedout items jumped, and classes and events are drawing more participants, he adds. The new library’s design is a mix of contemporary and Tehama County authenticity. “I love the fact that we recycled, reused the building,” says Sally Ainsworth, library manager, who has worked for the library for 30 years.

The entrance area showcases a large metal door from the loading dock of the building’s newspaper days, and the county law library and archives are housed in a room that retains a pressroom vibe. The library welcome sign is on reclaimed wood from the former Riverside Bar and Grill, a popular dining spot in Red Bluff. A swath of blue carpet running through the building represents the Sacramento River flowing through Red Bluff. JK Architecture of Auburn did the design. Deck says a new library was needed because the site of the previous library – in the old Safeway building – was tagged for a jail expansion project and the 1960s-era building was due for renovations. A library ad hoc committee reviewed more than 50 sites for a new place. “We even had a community conversation night where the community was able to vote on different locations. It was during this process that the Red Bluff Daily News became available, and it was the perfect fit for us,” Deck says. The bulk of the money for the renovation came from cigarette sales taxes set aside by the county, Deck says. Community donations totaled $1 million, with The McConnell Foundation contributing $500,000.4 continued on page 68 AUGUST 2018 www.EnjoyMagazine.net 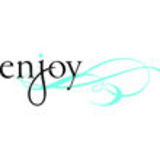