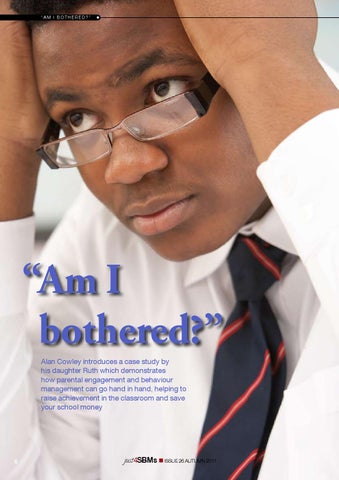 “Am I bothered?” Alan Cowley introduces a case study by his daughter Ruth which demonstrates how parental engagement and behaviour management can go hand in hand, helping to raise achievement in the classroom and save your school money

lements of the Government’s reaction to the riots that blighted the English summer in early August 2011 have already started to filter through, and surprise, surprise...education features. Talking on the BBC’s Andrew Marr Show a week after the riots, Michael Gove suggested that there was a moral imperative for teachers to be given the authority to physically restrain pupils.

Underachievement is sadly a recurring theme with many teenage pupils, and the stereotypical reaction to adult challenge made famous by characters such as Harry Enfield’s ‘Kevin’ or Catherine Tate’s ‘Lauren,’ are recognised by many adults working in schools on a day to day basis. But are the young Kevins and Laurens we meet in schools really as bad as the television stereotypes, or are they too ‘playing’ at being a stroppy teenager?

There was remarkably little, however, regarding behaviour and discipline in the 2011 White Paper – the main thrust seeming to be the welcomed promise to scrap the requirement of 24 hours’ notification to parents about detentions, whilst also asking schools to be mindful the responsibilities and demands placed on young carers when handing out detentions.

Given my family’s connections with the Parental Engagement agenda it’s no surprise that I’m fully up to speed on the research benefits of Parental Engagement in schools. Being tasked to design a new pupil support system gave me the opportunity to put the theory to the test and raised some interesting possibilities to develop best practice and offering some opportunities for potential costsaving.

This was especially disappointing in the light of a very detailed report specifically on the subject published just a month earlier by the House of Commons Education Select Committee, which, after consulting widely, amongst other measures, called upon a closer partnership with parents in tackling the issue. As a former teacher and school leader with over 37 years’ experience, I know only too well the frustration that is caused by low-level pupil disruption, but I’m equally convinced that the same old responses will not bring any meaningful change. We need new, fresh approaches that solve wider problems, which is why I was delighted when my daughter described a system that she introduced in a school where she had been appointed as a learning mentor.

A group of Year 10 students were underachieving in some subjects and it appeared that their classroom behaviour and attitude to learning was impacting upon that achievement. After consulting with each student they agreed to be on lesson report for these particular subjects and they agreed that if a bad lesson was reported then they would have to take a punishment. I felt that it was important that this further punishment wasn’t something they thought was being inflicted upon them and so asked them to choose the consequence they would have to face, such as a lunchtime detention. After each pupil had signed a contract to agree to the sanction put in place, their parents were contacted and informed of the report process and the purpose of it. Where possible this contact was made by phone so that any misunderstandings could be cleared up, immediately.

After each student had signed a contract...their parents were contacted and informed of the report process Each student was to be put on the report for at least three weeks so that any behaviour patterns could be identified. Release from the report required a full week of nothing but positive reports from teachers. Teachers were also informed of the lesson report and were encouraged to be very honest and exact with their comments. The report was produced daily and at the end of each school day would go home with the student to be signed by their parent or carer. This enabled the parents to see first-hand how their child

The report was produced daily and...would go home with the student to be signed by their parent or carer was doing each day, so they were just as involved in the report process as I was. There was a specific place at the bottom of the report for the parents (and the students) to put any comments about how the day had gone and about the progress they thought

was being made. This was used very effectively, allowing me to gain parents’ feedback – useful information to have when phone calls were made to parents. For example if a parent expressed a concern then I would contact them straight away to talk through the matter with them. To begin with, the self-chosen consequence of a negative comment that each student had agreed to proved to be a success. Only a handful of students had to do a detention a result of this. Before the detention was given I would have a meeting with each student to make sure they understood the reasons behind their actions and that I would be informing parents. It soon became apparent that the students were more upset about their parents finding out about their detention than actually having to do the detention.

It soon became apparent that the students were more upset about their parents finding out...than actually having to do the detention The parents were really supportive; especially where comments from lessons were generally becoming positive and a change in attitude towards those lessons could be seen. One thing that I found the most useful throughout the report process was how the teamwork

with the parents really had a positive impact upon the relationships I had with the students and moreover how their behaviour began to change rapidly. No longer were they just letting themselves down and receiving a detention, but what I found was that the thought of their parents being disappointed in them really had a major impact.

is this feeling of isolation that often undermines individual teacher’s attempts at imposing discipline. I had the support of parents, and when talking to the students at the beginning of each day, I always included their views in the briefing so that they could also share responsibility for sanctions. This strategy proved to be a major influencing factor.

I felt that I was no longer on my own when trying to encourage better classroom behaviour and positive attitude towards school. It

had commented on her son’s previous day’s performance, but in particular to one comment that was neither positive nor negative. She suggested that he receive a detention for this lesson. After talking with the student about his mother’s comment and the reasons behind her thoughts he agreed that the lesson wasn’t good enough and he would have a detention for this. Needless to say this was the last detention he had to take and after that day all his reports were had nothing but positive comments. I feel that this shows that working with the parents of students presents a united front and it proved to have a beneficial effect of the students I was working with.

The gesture of the phone call and making the effort...to say how well their son was doing really had a positive impact Another aspect of parental engagement that worked well was the reward. When the students were doing particularly well, had a glowing report for a week, or had made a positive change in their attitude and behaviour, I would make a phone call home to report on this progress. I would emphasise their positive behaviour, regardless of what the reports had been like previously. The students really appreciated this and saw it as their reward from me for their good behaviour. There are a few cases that really stand out for me. One student had struggled with the report at the

beginning having more negative comments than good. After three consecutive days of good reports, I told the student that if he had a full week I would ring home and tell his parents how well he had done and how proud of him I was. Sure enough after a full week of good reports I rang home and informed his parents about how well he was doing and my thoughts about this. His parents had seen the reports every night so they knew they were good, but the actual gesture of the phone call and making the effort to take the time to say how well their son was doing really had a positive impact. After the weekend the student came to see me and told me how he was rewarded for his good behaviour by being taken to the cinema and how he was getting on better with his Dad since I had rang to report his good behaviour. This was not the only case where students had received rewards from home as a result of my phone calls home to report good behaviour, other students had received money, video games and DVDs and clothes. The impact this had on the students was significant; even when they had been taken off report they would come themselves to tell me about a good lesson or something that they had achieved that they were really proud of, and asked me to ring home to tell their parents about this news. I continued to inform parents of any good behaviour and notable change or achievement. Although I continued to report any concerns as well to parents, I feel positive feedback is equally important to report to parents. The impact of working with the parents, informing them of any progress and news, really proved to be a success for the pupils, their teachers and the parents. After this experience of working

alongside parents to promote positive behaviour and attitude in school, I have really seen firsthand, the benefits that this has not only on the school, but also on the ‘at home’ relationships of some of the families taking part. Do not believe the stereotype. In essence parents, pupils and teachers all want success and are prepared to work together to achieve this. Ruth Cowley, 2011

poor reputation for disruptive behaviour finds it hard to recruit both staff and pupils. Lower pupil numbers have an impact upon capitation levels and these will vary from LA to LA but one thing is clear; in an uncertain economic climate schools do not need the added insecurity that comes when parents vote with their feet and opt for neighbouring schools, reducing rolls and funding levels. Future economic security: The personal financial cost in terms of future earning power, resulting from academic underachievement, caused by lowlevel disruption to the pupil responsible and to those pupils unlucky enough to have to endure the disruption, is hard to quantify. But if we take as an indication the estimation that over their working life, pupils who achieve 5 GCSEs at A*-C earn £180k more than those who don’t, (Learning Skills Council 2005) we come up with a figure of deficit of £4,000 per person per year over a 45 year working life. It is clearly a high price to pay. We’re all in this together Disruptive behaviour has very specific financial costs. Our standard response to dealing with the issue has changed very little over the years; it’s been to buy in staff to take the problem

away from teachers and the classroom. But this does not always work. This article first appeared in Just4SBMs magazine, which is a specialist publication for School Business Managers in primary and secondary s...

This article first appeared in Just4SBMs magazine, which is a specialist publication for School Business Managers in primary and secondary s...