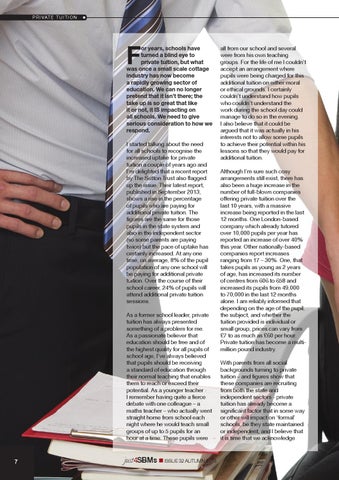 or years, schools have turned a blind eye to private tuition, but what was once a small scale cottage industry has now become a rapidly growing sector of education. We can no longer pretend that it isn’t there; the take up is so great that like it or not, it IS impacting on all schools. We need to give serious consideration to how we respond. I started talking about the need for all schools to recognise the increased uptake for private tuition a couple of years ago and I’m delighted that a recent report by The Sutton Trust also flagged up the issue. Their latest report, published in September 2013, shows a rise in the percentage of pupils who are paying for additional private tuition. The figures are the same for those pupils in the state system and also in the independent sector (so some parents are paying twice) but the pace of uptake has certainly increased. At any one time, on average, 8% of the pupil population of any one school will be paying for additional private tuition. Over the course of their school career, 24% of pupils will attend additional private tuition sessions. As a former school leader, private tuition has always presented something of a problem for me. As a passionate believer that education should be free and of the highest quality for all pupils of school age, I’ve always believed that pupils should be receiving a standard of education through their normal teaching that enables them to reach or exceed their potential. As a younger teacher I remember having quite a fierce debate with one colleague – a maths teacher – who actually went straight home from school each night where he would teach small groups of up to 5 pupils for an hour at a time. These pupils were

all from our school and several were from his own teaching groups. For the life of me I couldn’t accept an arrangement where pupils were being charged for this additional tuition on either moral or ethical grounds. I certainly couldn’t understand how pupils who couldn’t understand the work during the school day could manage to do so in the evening. I also believe that it could be argued that it was actually in his interests not to allow some pupils to achieve their potential within his lessons so that they would pay for additional tuition. Although I’m sure such cosy arrangements still exist, there has also been a huge increase in the number of full-blown companies offering private tuition over the last 10 years, with a massive increase being reported in the last 12 months. One London-based company which already tutored over 10,000 pupils per year has reported an increase of over 40% this year. Other nationally-based companies report increases ranging from 17 – 30%. One, that takes pupils as young as 2 years of age, has increased its number of centres from 606 to 658 and increased its pupils from 49,000 to 70,000 in the last 12 months alone. I am reliably informed that depending on the age of the pupil, the subject, and whether the tuition provided is individual or small group, prices can vary from £7 to as much as £60 per hour. Private tuition has become a multimillion pound industry. With parents from all social backgrounds turning to private tuition – and figures show that these companies are recruiting from both the state and independent sectors - private tuition has already become a significant factor that in some way or other will impact on ‘formal’ schools, be they state maintained or independent, and I believe that it is time that we acknowledge

Private tuition: who needs it? In the first part of a two-part article, Alan Cowley asks how the School Business Manager can help schools adopt a proactive response to the burgeoning private tuition sector

this, explore the implications and make a proactive response.

as little surprise when we hear on an almost weekly basis about schools once deemed ‘outstanding’ being reclassified as ‘in need of improvement’, free schools failing Ofsted for the most unprofessional of reasons, our state system being ranked almost as low as it is possible to go when compared to other industrialised countries...the list just grows and grows. As in most walks of life, bad news is good news for the media. Parents who have already opted for independent education have clearly already decided that the state maintained sector will not meet their needs. But when their child appears to be falling behind her or his classmates, many are now turning to private tuition to bring them up to speed. Clearly, this attitude towards the success of education is worrying. So, what is your school doing to assuage these concerns?

pupils on the D/C borderline in order to boost the number of pupils achieving 5 GCSE passes from A* - C including Maths and English, it is easy to understand why some parents are concerned if their child is predicted a grade lower than D, or is predicted one above C. This latter set of parents have also had their concerns raised by the practice of early entry, especially when there is no facility with a school for a GCSE grade achieved before the end of Year 11 to be retaken in order to improve the grade. This practice smacks of desperation on behalf of the school and sadly provides a clear manifestation of the widely held belief that comprehensive education is about teaching to the middle. This is NOT what comprehensive education should be. I know that it is an easy trap to fall into and can provide a quick fix to satisfy Ofsted, but it does nothing to promote personalised learning; surely we should be focusing on the needs and requirements of all pupils.

Achievement None of us would argue with the need to ensure that all children achieve or exceed their academic potential. For the vast majority of pupils that potential can be pretty accurately predicted through the data acquired from their previous standardised test results. It’s now common practice to take that potential and add a bit more to ensure challenge. I always used the predicted grade as an indicator and nothing more, certainly I never regarded it as a ceiling. If learning is about the acquisition and use of skills, why stop when someone appears to have reached a pre-determined goal. It’s far more exciting to reset the goal and take up a new challenge. However, given the emphasis that has been placed on the practice of schools targeting

Check list 1: How is your school responding to the aspiration of parents for their children to achieve their potential? 1. H ow well do you inform parents about the positive things that happen in school, or in education in general for that matter? 2. H ow good is your monitoring system at checking the progress that pupils are making, and how do you let parents know how well their children are progressing? 3. Modern data collection, monitoring and evaluation is closely tied to national curriculum levels, sub-levels, GCSE and GCE grades. Most reporting systems tap into data stored on the school’s MIS but demonstrating

progress through this method is notoriously difficult as pupils can go for months before they move securely into another sublevel. Do you report ‘progress’ to parents rather than ‘progression’ through sub-levels? 4. Schools usually inform parents if a child’s progress has fallen behind, sometimes inform parents of outstanding performance that exceeds expectation, but rarely inform parents if everything is progressing to target. One way of helping to reduce parental concern is through a steady flow of meaningful information to parents. How do you provide this flow of information? 5. What systems does your school have in place to support those individuals who have failed to understand something that has been taught? How secure is your teachers’ awareness of what has been learned and by whom? Do you have a culture that recognises that different people learn in different ways, and is that enshrined within your teaching and learning policy? What is it like to be a pupil in your school who does not understand some aspect of lesson content? 6. If we accept that the education received by children in school should provide everything they need to achieve their best, there should be no need for private tuition. How are you building relationships with your parent body to ensure that before they enrol their child for private tuition they are talking to you about their concerns?

Curriculum Delivery, Learning and Teaching If parents are feeling that their child is not achieving its potential at your school, there has either been a breakdown in communication, or they feel that the progress they are making is not good enough. If it is the latter, hopefully that can be addressed as mentioned in the previous section. But what if there has been no breakdown in communication and pupils are consistently underachieving?

Often, schools are guilty of assuming that parents already know and understand the service their children receive on a daily basis Naturally, you will have an awareness of this and a clear idea of how large the problem is across the entire school. Is it a general problem or one tied to specific teachers? If it is a general problem it may be worthwhile looking at your curriculum model and asking if it is meeting the needs of all pupils, or more accurately, is it meeting the needs of all groups of pupils? Certainly it can be an excellent exercise to task someone to explore this question whilst trying to keep as independent a view as possible.

Check list 2: How responsive is your curriculum delivery to the needs of your pupils? 1. A re there some subjects that need further support? If so, provide targeted support. 2. W hat capacity do you have for adopting cross-curricular teaching of some subjects? 3. T o what extent are different learning and teaching styles reflected in the day to day experiences of your pupils? 4. H ow frequently do you monitor and track the progress being made by pupils? 5. A re middle managers ensuring that teaching staff are being aspirational in their target setting? 6. A re TAs being used effectively? (ie not being left to deliver content by themselves to an individual pupil). 7. H ow do you know that learning is taking place in the classroom? 8. C an the pupil premium be used to improve the learning of some pupils through private tuition? The capacity to ensure these parents that the above are being met should reduce the number of parents seeking private tuition. Why would you pay for something you are already receiving? Often, schools are guilty of assuming that parents already know and understand the service their children receive on a daily basis. Reinforcement will only lead to improved confidence in your school. In the next issue of Just4SBMs I will take a look how private tuition may be having an impact on the quality of teaching and learning, and draw parallels with the NHS.n In the first part of a two-part article, Alan Cowley asks how the School Business Manager can help schools adopt a proactive response to the...

In the first part of a two-part article, Alan Cowley asks how the School Business Manager can help schools adopt a proactive response to the...