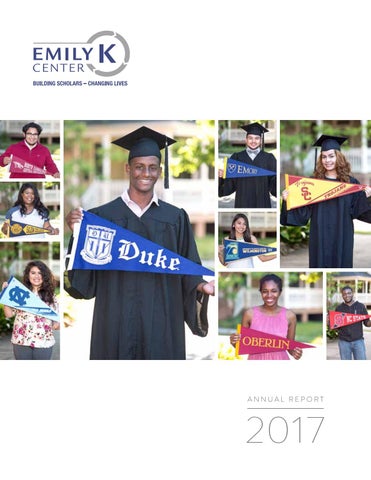 OUR MISSION The Emily Krzyzewski Center is a non-profit organization that serves as a college-access hub in Durham, North Carolina, propelling academically-focused, low-income K-12 students and graduates toward success in college through its K to College programs while also offering college information and advising support to any interested high school student through the Game Plan: College program. Through broader facility partnerships, thousands of additional students and community members use the Center as a place to convene, learn, and grow. Founded by Duke Men’s Basketball Coach Mike Krzyzewski and named in honor of his mother Emily, the Center is inspired by Coach K’s own experience as a first generation college student. Our mission is to inspire students to dream big, act with character and purpose, and reach their potential as leaders in the community.

A MESSAGE FROM OUR LEADERSHIP When the Emily Krzyzewski Center first opened in 2006, we had a sense that something really special was going to happen here. Fast forward to today, 11 years later, and we can confidently say that our results and our studentsâ&#x20AC;&#x2122; successes have exceeded even our greatest hopes. Today, the Center serves as a college access hub for all of Durham. We want to help any interested student learn how to become the best college candidate he or she can be, and with our K to College and Game Plan: College programs, we are well on our way to making this a reality. Our K to College programs served

of the park. Our 30 seniors earned

in workshops and individualized

our Scholars to College students plan

they earned nearly $11 million in

were a critical element to its success.

We served more students than ever before at the Center this year -- more than 500! It can be hard to pick favorite moments and achievements with so many terrific young people, but we did celebrate two very special firsts. In the fall, we found out that one of our students had been accepted to Duke University and would be attending on a full ride -- our first Duke acceptance and a moment we will all remember. That excitement doubled a few months later when we learned that a second Emily K Center student would be joining him on campus. Another celebratory benchmark was achieved when one of our high schoolers became our first Ivy League student, accepting a full scholarship to attend the University of Pennsylvania. 2017 was an amazing year at the Center, and we can hardly wait to see what is in store next. Thank you for supporting our work and for helping the Center become the place where Durham goes to go to college. Warmly,

Mike Krzyzewski Chair of the Board

Pioneer Scholars ensures that elementary and middle school students are building academic skills, achieving in school, and laying the foundation for future college success. This year, each of our 80 students had the opportunity to participate in up to 865 hours of structured tutoring, enrichment, and leadership programming at the Center.

Scholars to College ensures that high school students challenge themselves academically and personally, ultimately becoming graduating seniors who are scholarship-eligible and college-ready. This year, 122 students participated in an average of five hours of weekly curriculum-based instruction, individualized advising, tutoring, ACT preparation, and other enrichment activities at the Center.

Alumni serve as mentors for our students, ambassadors for the Center, and leaders in their communities. This year, alumni participated in reunions and networking events with their peers and Center supporters, led Q&A panels for current high schoolers, and hosted our students on their college campuses.

Chris, a 3rd grade student at Maureen Joy Charter School, was a new student in the Pioneer Scholars program. Chris made straight-As this year and surpassed all grade-level expectations on the ACT Aspire test. He worked hard every day during the year with his tutors Tarra and Ariel and spent the summer at the Center participating in project-based learning which included the design of a soda bottle ecosystem. He also excelled outside of the classroom, winning our Healthy Habit Award and representing the Center during halftime of a Duke Menâ&#x20AC;&#x2122;s Basketball game.

Ja’Chelle, a junior at Hillside High School, has been in the Scholars to College program since her freshman year. At Hillside, Ja’Chelle is part of the International Baccalaureate program which will allow her to graduate with college credit. Outside of the classroom, Ja’Chelle stays busy as a member of the National Honor Society, Girl Scouts, the gospel choir and the tennis team. She also worked with Center staff to apply for a full scholarship that allowed her to spend three weeks this summer in Ghana where she volunteered with a local NGO. Ja’Chelle will serve as a Teen Advisor for Game Plan: College in the 2017-2018 school year.

Miracle, a first-year student at the University of North Carolina at Greensboro, is a member of the Scholars on Campus program. She is pursuing a double major in Sociology and African and African American Diaspora Studies with a minor in Criminology. Miracle is also studying Japanese with plans to study abroad in the spring of 2019. On campus, Miracle holds leadership positions with the Gate City Youth Council NAACP and works part-time. After graduation, Miracle plans to look for a researchbased job that will help her work to create political discourse and bring about equality and equity for everyone.

Kleyser graduated from North Carolina Central University in May of 2017 with a bachelor’s degree in Physics and is currently a Ph.D. candidate in Pennsylvania State University’s Material Science and Engineering program. While at NCCU, Kleyser was awarded the Dream STEM Scholarship to study the growth of nanowires and nanowire heterostructures through the vapor-liquid-solid technique. He also served as a Resident Assistant, was an active member of the Centennial Scholars program, and helped form the Raices Club to share Latin American culture on campus. Kleyser is the first of our Emily K Center alumni to pursue a doctorate.

The Game Plan: College program provides information and advising to Durham high school students, ensuring that they have the knowledge and support necessary to apply and enroll in college. The goal of the program is to increase the college enrollment and success rates of low-income students, ultimately changing the long-term economic outcomes for these students and their families. In its first full year of operation, Game Plan: College registered nearly 800 students and served 288 students in workshops and/or college advising sessions.

Workshops are designed to help eliminate college myths and help students better ready themselves for the college application process.

By tackling topics like essay writing, how to fill out the FAFSA, and how to determine which colleges are the best fit, workshops better equip students to consider all their postsecondary options. Workshops are designed to be flexible and are conducted at the Center or within the broader Durham community at churches, schools, or other community groups.

Advising relationships begin with an intake meeting after which students receive support based on their individual needs and goals.

Through advising sessions, students can gain personalized insights and individualized advice geared toward their own college goals. Some students have a singular, meaningful interaction with the program, perhaps just getting feedback on a college essay, while othersâ&#x20AC;&#x2122; engagement is more extensive and ongoing.

Teen Advisors complete a rigorous four-week training and participate in ongoing staff development so they are well-prepared to advise other students.

In addition to the support provided by Game Plan: College staff, a team of Teen Advisors also helps deliver workshops and advising sessions to their peers. This model allows students to connect with someone who is also experiencing the college application process first-hand and proved to be a tremendous asset to the program in year one.

Increased their ACT Aspire score in at least one subject

acceptances to 69 different colleges and universities and

in scholarships and grants.

are engaged in leadership activities in their schools and communities, averaging 5.3 hours of participation each week

community-based workshops covering: Our signature introduction to the college process

74% of studentsâ&#x20AC;&#x2122; college expenses were covered by scholarships and grants.

As a member of the Durham non-profit community, the Center enhances the impact of local organizations through Facility Partnerships by serving as a home and resource for non-profits, schools, and community groups as they convene, learn, and grow. This year, more than 60 Facility Partners ran programs, hosted events, and held meetings at the Center, serving more than 1,200 students and community members in an average week.

Infinite Scholars, a first-time Facility Partner, hosted a college scholarship fair at the Center, welcoming more than 19 different schools and 300 students. During the fair, students had the chance to learn more about a variety of colleges and universities and were able to speak directly with admissions officers. Those in attendance left with a better understanding of what is required to gain admittance to certain schools. Some students also discovered new schools that they hadn’t known about before and left excited about new possibilities.

The Center hires well-qualified professionals who are mission-driven and student-focused. This year, more than 45 educators built meaningful relationships with our students while developing and teaching curriculum and providing individualized advising and support.

Volunteers are skilled and committed community members who leverage their time and talents to support our students and enhance the mission of the Center. This year, 138 volunteers made semester-long commitments to work directly with our students, eight companies and organizations assisted with the operational needs of the Center, and more than 60 individuals provided special event and program support.

The Center is wholly donor-funded, and our students and organization succeed and grow only through the generosity of others. The Center is grateful for the nearly 700 individuals, families, foundations, and corporations that supported our students through financial or in‑kind contributions this year.

Kelsey Kornaus has served as a volunteer tutor with the Pioneer Scholars program for three years. While she began working with sixth grade students, Kelsey transitioned to first graders in her second year and has stayed with the same group of students ever since. She is looking forward to continuing her work with these students and seeing their progress as third graders. Kelsey holds a degree in Chemical Engineering from the University of WisconsinMadison and works as a Senior Scientist at Burt’s Bees in R&D Packaging Development.

James Hankins II has served as a staff member and Lead Counselor for the Scholars to College program since 2013. In this role, he helped guide students through high school and the college application and financial aid processes. One of the students he worked with is now attending Emory University on a full ride. When not at the Center, James taught social studies at the Knightdale High School for Collaborative Design. Upon completion of this school year, James left his role in the classroom to pursue a Masters in Education Policy at Harvard University with plans to pursue a career as an advocate for policies that benefit students and teachers.

Mike and DiAnn Borasky have been supporters of the Center since 2010 when they first attended an Inside Duke Basketball event. While their love for Duke Basketball may have first introduced them to the Center, it is their love for the students and the work that has made them loyal friends. Not only do the Boraskys support the Center financially, they also give of their time. Both Mike and DiAnn have volunteered weekly with our students for the past five years. Their commitment has left an indelible impact on the Center.

OUR SUPPORTERS We are tremendously grateful for the support of the following individuals, foundations, and corporations. Their generosity has allowed the Center to provide life-changing programs and services for Durham students. This list acknowledges gifts given between July 1, 2016, and June 30, 2017. Every effort has been made to ensure the accuracy of this listing. If you find an error, please contact the Center at 919-680-0308 or connect@emilyk.org.

The Center is committed to transparency, responsible financial stewardship, and long-term sustainability. Detailed financial statements are available on our website.

The Tomorrow Fund for Hispanic Students 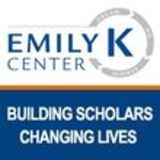