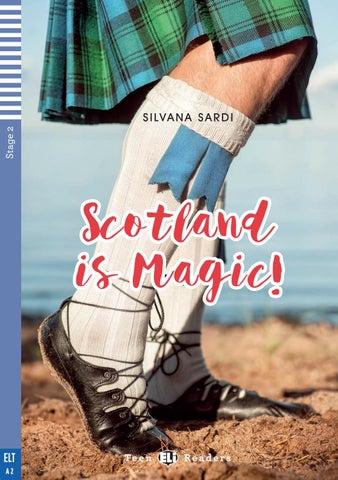 In this reader you will find: - Glossary of difficult words - After-reading activities - An audio recording of the book

Do you like mystery, legends or haunted castles? Or how about vibrant cities and exciting festivals? Well, you will find all of these and much more in this A-Z about Scotland. Itâ&#x20AC;&#x2122;s a country full of history and traditions and lots of surprises too! Thereâ&#x20AC;&#x2122;s something for everybody from sports to museums! So, come on! Start your A-Z journey through Scotland and discover the magic of this fantastic country!

If someone says Scotland, what do you think of? Kilts? Tartan? The Bagpipes? Well, yes you’re right, but there’s lots more too! First, let’s see where Scotland is!

On the map Scotland is north of England and is part of the island of Great Britain. Scotland also has many islands, almost 800! The most famous islands are Shetland (where those nice little ponies* come from!) Orkney, the Hebrides, Arran and Skye. Just over 5 million people live in Scotland so there’s lots of space for everyone!

History People have lived in Scotland since 10,000 BC, but they haven’t always had a quiet life. First, the Romans arrived in England but they didn’t get much farther. The Romans were afraid of the Scots so they built a wall between England and Scotland called ‘Hadrian’s Wall’. You can still see parts of it today. Then the Vikings came from Norway and Denmark. But Scotland’s biggest enemy* became the English and there were lots of wars between these two countries. Do you remember the film Braveheart about William Wallace? He fought against the English for a free Scotland. There were wars for years. Then, finally, in 1603, King James VI of Scotland became James I of both England and Scotland. 6

What about the people? Millions of tourists come to visit Scotland every year. Scottish people are friendly and will always help you with a smile. Remember, if you come to visit, bring an umbrella because the Scottish summer can be very short, and even then it rains! And… never ask a Scot if he’s English or you could be in big trouble!

The Government Scotland is part of the UK but it has had its own parliament since 1999 in Edinburgh, the capital city. The Scottish Parliament decides on things like health*, laws and education*, while the UK parliament decides about defence* and Europe. On 18th September 2014, there was a referendum to decide if Scotland wanted to become a completely independent country but Scotland decided to stay part of the UK. Since the ‘Brexit’ result, Scotland is thinking about having another referendum to become independent. Who knows…maybe one day…

Of all the different types of musical instruments, bagpipes have a really unique sound. Have you ever heard anyone playing them? Do you think bagpipes come from Scotland? They certainly play them in Scotland but maybe there’s more to their history than you think…

Where do they come from? Bagpipes are very important in Scotland but… they weren’t invented there! Historians believe that bagpipes were used in ancient Rome and parts of the Middle East, including Persia (known today as Iran). How they arrived in Scotland is still a mystery. Many people began to associate bagpipes with Scotland after World Wars I and II, because there was always a piper* who played them at the start of a battle*.

Do you know? Today, Scotland is one of the two countries where bagpipes are made. The other country is… Pakistan!

Bagpipe Day March 10th is International Bagpipe Day. On this day, all kinds of pipers meet together, organise concerts, visit schools and play in the streets. It’s great fun! 8

When do they play the bagpipes? There are lots of different types of bagpipes. The most famous are the Great Highland pipes that are bigger than other bagpipes and the most difficult to play. The sound of the bagpipes is very particular and most people love it or hate it! In the past, each clan* had its own piper who wrote special songs. He played when a child was born, at weddings*, and when somebody died, and at the start of a battle. Today the bagpipes are played at special times like New Year and at weddings.

Bagpipes aren’t popular just with folk and country music but… pop music too. For example, a piper played in Paul McCartney’s song Mull of Kintyre and in ACDC’s song, It’s a long way to the top. You can also find electronic bagpipes now, but they will never take the place of the Great Highland bagpipes.

Can you believe it? Astronaut Kjell Lindgren played Amazing Grace with his bagpipes in space! It seems to be the first time for this instrument in space! piper the person who plays the bagpipes battle part of a war

a Graffiti artists painted it. b The Kings and Queens of Scotland lived here. c There are two friendly ghosts.

Edinburgh Your class visited Edinburgh last week. Write an email to your Australian friend, Mark. Tell him: – what you saw – what you did – what you liked best

Food What would you like to eat? 1 It’s made from different parts of a sheep. 2 It’s a soup. 3 It’s a biscuit made with sugar and butter. 4 It’s a sweet at the fish and chip shop. 5 It’s a nice cake with a cup of tea.