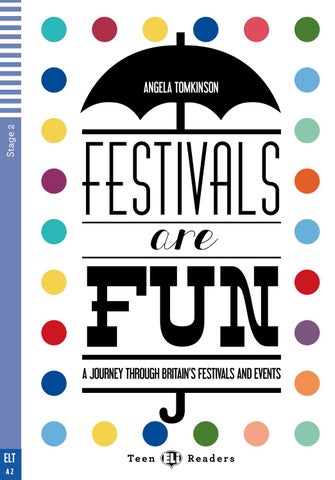 Tags Things to do

A JOURNEY THROUGH BRITAIN’S FESTIVALS AND EVENTS

In this reader you will also find: - Glossary of difficult words - After-reading activities - An audio recording of the book

Do you want to join us on our A-Z journey around the festivals of Britain? Would you like to learn about the biggest dog show in the world? Or how many fire festivals there are in Britain? Do you want to know what happens during the festival of sleep and find out on which day British people eat pancakes? You can discover the answers to these questions and learn much more about the different festivals and events that happen every year in Britain. Let’s go and have some fun!

In Britain people love animals. Many families own a pet such as a dog, cat or rabbit but also other unusual animals too. Every year different events take place to celebrate this love. Read on to find out more.

The Cocker Spaniel is the type of dog that has won the Best in the Show prize the most times.

Crufts Do you know Crufts? It’s the biggest dog show in the world and it’s in the Guinness Book of World Records! A man called Charles Cruft started the first show in 1891. He worked as a manager for a dog biscuit factory. In the beginning there were about 2,000 dogs in the show. Now there are about 23,000! The dogs and their owners* can win different prizes but the most important is for the ‘Best in the Show’.

The Royal Welsh Show This is one of the biggest farmer’s shows in Europe and is in July in Wales. The event started in 1904 and the ‘Royal Welsh Agricultural Society’ organised the first show. It lasts for four days and more than 200,000 people come to visit it. There are many different events during the show and there are prizes for the best farm animals such as cows, sheep, horses, goats and pigs. There are also sheep shearing competitions (taking the wool off the sheep) and a prize for the best sheepdog. You can also find some of the Royal family there who like visiting the show.

Swan Upping This unusual event first happened in the 12th century. Now it happens every year in July. A group of people called ‘Swan Uppers’, who wear red coats, have to catch and count the swans they find on the River Thames near London. Some of these swans belong to the Queen. In the past the swans became the food of the Royal banquets* but now they are counted and checked for health reasons. The swan uppers travel for about 79 miles along the River Thames and it usually takes them about five days to complete the census*.

Do you know? Swans can fly as fast as 95km an hour and they have more than 25,000 feathers on their body.

Whittlesey Straw Bear Festival This is a very old custom and is to do with an animal, but not a real one! This celebration* is on the first Monday after Twelfth Night (5th January). A man or boy from the village of Whittlesey in Cambridgeshire wears straw* all over his body to look like a bear. He dances his way around the village followed by the local people and musicians. At the end of the celebration the villagers burn the bear costume and there is music, dancing and eating. Do you know? 44% of homes in Britain have a pet. Almost ¼ of them own a dog. The most popular names for British people’s dogs last year were: Bella, Poppy and Alfie.

Would you like to be a Viking for a day? You can do this and much more at the Jorvik Viking Festival in York. Take a look to find out more!

Jorvik Viking Festival It’s the biggest Viking festival in Europe. It takes place every year in February in the city of York in the north of England. The festival lasts one week and it celebrates the last Viking king, Eric Bloodaxe. It’s similar to a very old Viking festival called Jolablot. During the festival you can visit the Viking market, eat Viking food, listen to Viking music and hear Viking stories. Many people wear Viking costumes and fight in a Viking battle*. On the last day of the festival there’s a very big parade and you can also see Viking longships on the river.

The city of York York is a very old city with a lot of history. It’s almost 2,000 years old. The Romans built the town in 71AD and called it Eboracum. It became the most important town of the Roman empire in Britain. Many hundreds of years later the Vikings arrived in Britain and took control of the city of York in 866AD. During the time of the Vikings, York became a very important river port with many boats that carried goods* and materials* around Britain and other countries. But almost one hundred years later the Vikings lost their battle* and had to leave Britain. Do you know? Judi Dench, the actress who played M in many James Bond films was born in York!

A patron saint is a saint that protects* a place or a person. In Britain we have four of them. Let’s read all about them!

patron saints Saint David Saint David is the patron saint of Wales and we celebrate his day on March 1st. He was born in south west Wales in 589AD. Many places in Wales like Cardiff, Swansea and Aberystwyth have parades in the centre of the cities. Welsh people eat Welsh food such as cawl, a type of soup and bara brith, a type of bread. They also wear a leek (a long green vegetable) or a daffodil (a yellow flower) which are the traditional symbols of Wales. And did you know that in Disneyland Paris they also celebrate Saint David’s Day? They have a week of Welsh events with fireworks and Disney characters who wear traditional Welsh clothes during the first week of March. 36

Saint George Saint George is the patron saint of England and we celebrate his day on April 23rd. He became the patron saint of England in 1348, although he wasn’t born in England, but in Turkey. There are many stories about him and people say that he killed a dragon and saved a princess. In the past, Saint George’s day was as important as Christmas but now people have to go to work and children go to school in England on this day. But many English people think that this day should be a holiday. On this day many people wear a red rose which is England’s national flower. In Trafalgar Square in the centre of London there’s a concert to celebrate Saint George’s day.

Animals Can you match the right animals with their festivals? 1 ■ Crufts a swans 2 ■ The Royal Welsh Show b a bear 3 ■ Swan Upping c dogs 4 ■ Whittlesey Festival d cows, sheep, horses, pigs and goats

British people drink a lot of tea. ‘It’s not my cup of tea’ means you don’t want a drink. British people hate speaking about the weather. British people always smile when they’re telling a joke. People are happy if you jump the queue in Britain.

What’s a Maypole? What’s a May Queen? Where was the tallest Maypole? How old is Morris dancing? When did the Industrial Revolution start?

Fire Tell your partner what you remember about one of the fire festivals. Speak for about 2 minutes!

Heritage Choose the right answer. 1 There are 13/16 World Heritage Sites in England. 2 People think a giant/a magician built the Causeway in Northern Ireland. 3 The Romans built Hadrian’s Wall in 122/1222 A.D. 4 Stonehenge is a circle of very tall trees/stones.