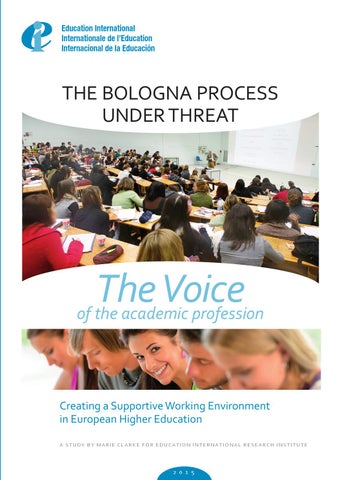 THE BOLOGNA PROCESS UNDER THREAT

The Voice of the academic profession

Creating a positive working environment is key to the future success of higher education across Europe. Self-direction and autonomy are positive influences in the work context. Those who feel supported at work will enjoy their experience, like their jobs and have high levels of job satisfaction. The capacity to form supportive relationships at work is one of the main features of productive work environments.

In this study, academics across nine countries in Europe identified a number of key issues that impacted upon their working environment. These included the impact of decreased funding; the difficulties experienced in forming supportive relationships; negative experiences of academic life in the initial years; a deterioration in working conditions; the challenges posed by the Bologna Process; the changing demands of the teaching and research roles; their lack of influence and their non-involvement in decision-making processes within their institutions.

Decreased funding The non-replacement of staff was a recurring theme for academics in each of the nine countries. This had resulted in higher workloads for existing staff. Austerity also witnessed the introduction of wage freezes over a prolonged period. In such circumstances few opportunities presented for career development.

Forming supportive relationships u  Almost half of respondents (48%) indicated that they did not have permanent contracts and a third (33%) was on fixed term contracts. u For those on contracts and in part time positions the working conditions were particularly difficult as they could not make future plans. They worked and sought work in uncertain contexts. u Nearly a quarter (23%) of academics in this study had worked in two institutions since they had qualified, almost a fifth (17%) had worked in three and 10% had worked in six or more institutions. u The difference in status between permanent staff and those on contracts also impacted upon experiences of their working environments.

Over half of academics (51%) in this study believed that their working conditions had deteriorated. They were under pressure to teach more students and regularly took work home, which affected their personal and family relationships. They did not feel that they had enough time to devote to their research. The lack of administrative support was referred to frequently. Many viewed administrative work as being unproductive and time consuming.

The Bologna Process is blamed! Two fifths (40%) of participants viewed the Bologna Process as having contributed to an increased workload and some academics commented on the amount of money spent on the process within their institution. Some concerns were expressed about the Bologna Process, namely that it made undergraduate programmes very similar to what students experienced at high school and that it promoted an instrumentalist approach to education through the credit-based system. The introduction of modular teaching, the restructuring of academic units, mergers of different departments, schools and faculties was viewed as a contributor to the distance that has emerged between staff at the periphery and staff at the centre of the institution.

Full autonomy: that’s what actually renders the profession attractive. For everyone.

they have full freedom although they are poorly paid [Lecturer, Germany].

Student centred teaching ? There is greater student heterogeneity. This has implications for both teaching and cultural engagement. Over half of academics (53%) in this study indicated that student diversity had increased since they had started working. Students presented with a greater variety of needs, which in turn increased the pastoral aspect of academicsâ&#x20AC;&#x2122; work. Many academics have no training in this area and require greater supports to be effective in this kind of role. Changes in approaches to pedagogy are an area where academics require continued support. Over two fifths (45%) of academics expressed dissatisfaction with the quality of pedagogical support to which they had access. Over half of academics (51%) were of the view that their higher education institution did not support research led teaching.

The teaching role u

Academics in this study were of the view that teaching-related activities were not  adequately funded in their institutions.

A third of academics (33%) did not consider that management in their institutions  supported the teaching aspects of their role. Over two fifths (45%) of academics expressed dissatisfaction with the quality of pedagogical support to which they had access.

Over half of academics (51%) were of the view that their higher education institution  did not support research led teaching.

It also emerged that for many, teaching was not valued by the institution when it  came to career progression.

Almost two fifths of academics (39%) indicated that they were not encouraged to  improve their instructional skills in response to teaching evaluations.

Research The international aspect of publishing means that academics must publish in English and spend time abroad. u Over two fifths (46%) did not consider that their higher education institutions provided adequate opportunities for leave. u Over half of respondents (54%) did not feel adequately supported by their institutions to attend national and international conferences. If they wished to attend conferences, they could only do so when classes were not in session. Funding was also an obstacle, particularly for those academics employed in non-permanent contractual positions. u The majority of respondents (70%) indicated that there was increased institutional pressure to raise external research funding since the time of their appointment. Many academics in this study felt that institutions had become reliant on this funding to provide essential services. u Over half of the academics in this study (53%) did not consider that their institutions provided adequate supports to facilitate their publications. The growing pressure

to publish in high profile journals has meant that academics must conform to publication criteria and interests.

Decision making u It emerged that nearly half of the academics (44%) in this study experienced a lack of collegiality and participation in decision-making within their institutions. u Almost half of the participants (48%) felt that they were not influential in the wider institutional context. u Over half of academics (51%) viewed the non-involvement of staff in decisionmaking as a real problem in the work environment.

1. There is a need for greater investment in the higher education sector in national and European contexts.

2. E  liminate the proliferation of fixed term contracts in the sector and create a more stable profession that will attract young people. 3. P  rovide higher levels of funding for PhD scholarships and post-doctoral positions so that young academics can plan for the duration of their studies and post-doctoral positions. 4. C reate conditions that promote equality among colleagues so contract staff does not feel undervalued. 5. Provide adequate supports so that academics can achieve a work life balance. 6. Provide administrative supports that will help individual academics directly with their work.

7. There is a need for more investment in activities that support the teaching function and provide academics with high quality pedagogical support that focuses directly on their practice. 8. Make available specialised training to academics so that they can deal with students who are presenting with diverse needs. 9. All higher education institutions should support research led teaching.

11. Higher education institutions should prioritise the evaluation of teaching. Such evaluations should facilitate academics in the improvement of their pedagogical activities.

12. All academics should have access to sufficient opportunities to avail of research leave.

14. Higher education institutions should create opportunities for academics to become meaningfully engaged at all levels of the institution.

15. Higher education institutions need to develop meaningful communication systems that are not focused only on information transmission.

16. Higher education institutions should ensure that academics are properly informed about all aspects of the Bologna Process.

17. Higher education institutions need to ensure that overall purpose and integration is not lost due to the requirements of the Bologna Process.

18. Higher education institutions need to develop systems so that academics can be actively involved in decision-making processes with reference to research priorities, budgets, promotions and tenure.

19. Higher education institutions need to develop procedures that will focus on building collegiality among all staff.

About the study A mixed methods approach was employed in this study utilising both a survey instrument and semi-structured interviews to explore participantsâ&#x20AC;&#x2122; experience of their everyday working reality. The survey was distributed between mid-December 2013 and February 2014, securing 9,049 respondents. The response rate varied from country to country. Response rates above 30% were reached in Serbia; between 10% and 30% in Ireland, Germany, Italy and Latvia; less than 10% in Denmark, Portugal, Romania and the UK. The study also included 62 interviews with academics from across the nine participating countries.

Dr Marie Clarke is a Senior Lecturer in the School of Education, University College Dublin. She was the Principal Investigator for Ireland in the European Science Foundation/Irish Research Council for the Social Sciences funded programme of research entitled: The Academic Profession in Europe: Responses to Societal Change (EUROAC). She is published internationally and nationally in higher education, education history/policy and teacher education. She was appointed Head of the School of Education, UCD for a four-year term 2007-2011 and is a member of UCD Governing Authority since 2009. She is a past President of the Irish Federation of University Teachers (IFUT) having served a two-year term from 2011-2013.

I N the name ofâ&#x20AC;Ś [â&#x20AC;Ś] academic freedom, the community of scholars, scrutiny of accepted wisdom, truth seeking, collegial governance, individual autonomy, and service to society through the production of knowledge, the transmission of culture, and education of the young (Kuh & Whitt, 1986: 76)

http://go.ei-ie.org/bolognaunderthreat The Education International Research Institute, which functions as a separate body to Education International (EI), but similar to it, helps to equip teachers and trade unionists with the knowledge and information they need to meet the many challenges facing public education systems today. The work of the EI Research Institute is based on the conviction that quality research can make an important contribution to the attainment of trade union, professional and societal goals and lays the foundation for developing sound policies and practices. ISBN 978-92-95100-89-3 (Paperback) ISBN 978-92-95100-90-9 (PDF)

The Bologna Process Under Threat

The Bologna Process Under Threat