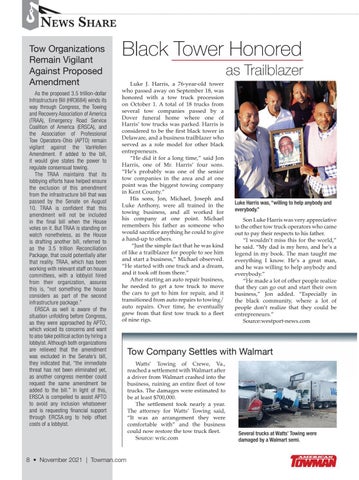 News Share Tow Organizations Remain Vigilant Against Proposed Amendment As the proposed 3.5 trillion-dollar Infrastructure Bill (HR3684) winds its way through Congress, the Towing and Recovery Association of America (TRAA), Emergency Road Service Coalition of America (ERSCA), and the Association of Professional Tow Operators-Ohio (APTO) remain vigilant against the VanHollen Amendment. If added to the bill, it would give states the power to regulate consensual towing. The TRAA maintains that its lobbying efforts have helped ensure the exclusion of this amendment from the infrastructure bill that was passed by the Senate on August 10. TRAA is confident that this amendment will not be included in the final bill when the House votes on it. But TRAA is standing on watch nonetheless, as the House is drafting another bill, referred to as the 3.5 trillion Reconciliation Package, that could potentially alter that reality. TRAA, which has been working with relevant staff on house committees, with a lobbyist hired from their organization, assures this is, “not something the house considers as part of the second infrastructure package.” ERSCA as well is aware of the situation unfolding before Congress, as they were approached by APTO, which voiced its concerns and want to also take political action by hiring a lobbyist. Although both organizations are relieved that the amendment was excluded in the Senate’s bill, they indicated that, “the immediate threat has not been eliminated yet, as another congress member could request the same amendment be added to the bill.” In light of this, ERSCA is compelled to assist APTO to avoid any inclusion whatsoever and is requesting financial support through ERCSA.org to help offset costs of a lobbyist.

Luke J. Harris, a 76-year-old tower who passed away on September 18, was honored with a tow truck procession on October 1. A total of 18 trucks from several tow companies passed by a Dover funeral home where one of Harris’ tow trucks was parked. Harris is considered to be the first black tower in Delaware, and a business trailblazer who served as a role model for other black entrepreneurs. “He did it for a long time,” said Jon Harris, one of Mr. Harris’ four sons. “He’s probably was one of the senior tow companies in the area and at one point was the biggest towing company in Kent County.” His sons, Jon, Michael, Joseph and Luke Anthony, were all trained in the towing business, and all worked for his company at one point. Michael remembers his father as someone who would sacrifice anything he could to give a hand-up to others. “Just the simple fact that he was kind of like a trailblazer for people to see him and start a business,” Michael observed. “He started with one truck and a dream, and it took off from there.” After starting an auto repair business, he needed to get a tow truck to move the cars to get to him for repair, and it transitioned from auto repairs to towing/ auto repairs. Over time, he eventually grew from that first tow truck to a fleet of nine rigs.

Luke Harris was, “willing to help anybody and everybody.” Son Luke Harris was very appreciative to the other tow truck operators who came out to pay their respects to his father. “I wouldn’t miss this for the world,” he said. “My dad is my hero, and he’s a legend in my book. The man taught me everything I know. He’s a great man, and he was willing to help anybody and everybody.” “He made a lot of other people realize that they can go out and start their own business,” Jon added. “Especially in the black community, where a lot of people don’t realize that they could be entrepreneurs.” Source:westport-news.com

Tow Company Settles with Walmart Watts’ Towing of Crewe, Va., reached a settlement with Walmart after a driver from Walmart crashed into the business, ruining an entire fleet of tow trucks. The damages were estimated to be at least $700,000. The settlement took nearly a year. The attorney for Watts’ Towing said, “It was an arrangement they were comfortable with” and the business could now restore the tow truck fleet. Source: wric.com

Several trucks at Watts’ Towing were damaged by a Walmart semi.