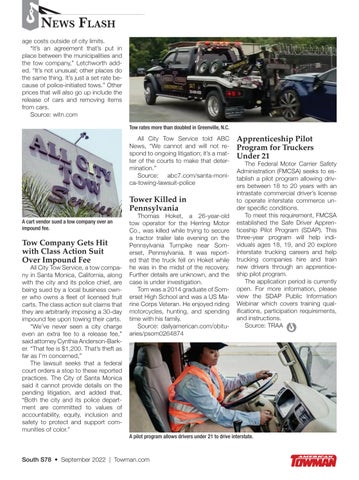 News Flash age costs outside of city limits. “It’s an agreement that’s put in place between the municipalities and the tow company,” Letchworth added. “It’s not unusual; other places do the same thing. It’s just a set rate because of police-initiated tows.” Other prices that will also go up include the release of cars and removing items from cars. Source: witn.com Tow rates more than doubled in Greenville, N.C.

All City Tow Service told ABC News, “We cannot and will not respond to ongoing litigation; it’s a matter of the courts to make that determination.” Source: abc7.com/santa-monica-towing-lawsuit-police

Tower Killed in Pennsylvania A cart vendor sued a tow company over an impound fee.

All City Tow Service, a tow company in Santa Monica, California, along with the city and its police chief, are being sued by a local business owner who owns a fleet of licensed fruit carts. The class action suit claims that they are arbitrarily imposing a 30-day impound fee upon towing their carts. “We’ve never seen a city charge even an extra fee to a release fee,” said attorney Cynthia Anderson-Barker. “That fee is $1,200. That’s theft as far as I’m concerned,” The lawsuit seeks that a federal court orders a stop to these reported practices. The City of Santa Monica said it cannot provide details on the pending litigation, and added that, “Both the city and its police department are committed to values of accountability, equity, inclusion and safety to protect and support communities of color.”

Thomas Hoket, a 26-year-old tow operator for the Herring Motor Co., was killed while trying to secure a tractor trailer late evening on the Pennsylvania Turnpike near Somerset, Pennsylvania. It was reported that the truck fell on Hoket while he was in the midst of the recovery. Further details are unknown, and the case is under investigation. Tom was a 2014 graduate of Somerset High School and was a US Marine Corps Veteran. He enjoyed riding motorcycles, hunting, and spending time with his family. Source: dailyamerican.com/obituaries/psom0264874

Apprenticeship Pilot Program for Truckers Under 21

A pilot program allows drivers under 21 to drive interstate.