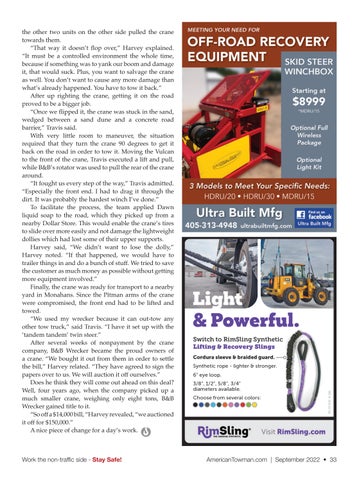 the other two units on the other side pulled the crane towards them. “That way it doesn’t flop over,” Harvey explained. “It must be a controlled environment the whole time, because if something was to yank our boom and damage it, that would suck. Plus, you want to salvage the crane as well. You don’t want to cause any more damage than what’s already happened. You have to tow it back.” After up righting the crane, getting it on the road proved to be a bigger job. “Once we flipped it, the crane was stuck in the sand, wedged between a sand dune and a concrete road barrier,” Travis said. With very little room to maneuver, the situation required that they turn the crane 90 degrees to get it back on the road in order to tow it. Moving the Vulcan to the front of the crane, Travis executed a lift and pull, while B&amp;B’s rotator was used to pull the rear of the crane around. “It fought us every step of the way,” Travis admitted. “Especially the front end. I had to drag it through the dirt. It was probably the hardest winch I’ve done.” To facilitate the process, the team applied Dawn liquid soap to the road, which they picked up from a nearby Dollar Store. This would enable the crane’s tires to slide over more easily and not damage the lightweight dollies which had lost some of their upper supports. Harvey said, “We didn’t want to lose the dolly,” Harvey noted. “If that happened, we would have to trailer things in and do a bunch of stuff. We tried to save the customer as much money as possible without getting more equipment involved.” Finally, the crane was ready for transport to a nearby yard in Monahans. Since the Pitman arms of the crane were compromised, the front end had to be lifted and towed. “We used my wrecker because it can out-tow any other tow truck,” said Travis. “I have it set up with the ‘tandem tandem’ twin steer.” After several weeks of nonpayment by the crane company, B&amp;B Wrecker became the proud owners of a crane. “We bought it out from them in order to settle the bill,” Harvey related. “They have agreed to sign the papers over to us. We will auction it off ourselves.” Does he think they will come out ahead on this deal? Well, four years ago, when the company picked up a much smaller crane, weighing only eight tons, B&amp;B Wrecker gained title to it. “So off a $14,000 bill, “Harvey revealed, “we auctioned it off for $150,000.” A nice piece of change for a day’s work.