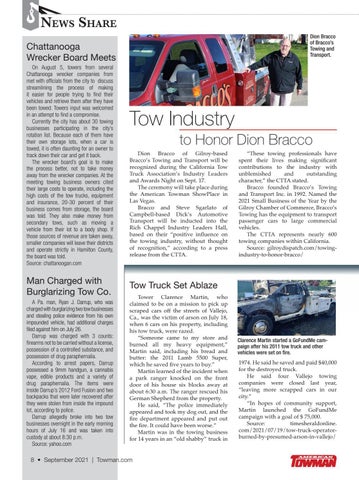 Chattanooga Wrecker Board Meets On August 5, towers from several Chattanooga wrecker companies from met with officials from the city to discuss streamlining the process of making it easier for people trying to find their vehicles and retrieve them after they have been towed. Towers input was welcomed in an attempt to find a compromise. Currently the city has about 30 towing businesses participating in the city’s rotation list. Because each of them have their own storage lots, when a car is towed, it is often daunting for an owner to track down their car and get it back. The wrecker board’s goal is to make the process better, not to take money away from the wrecker companies. At the meeting towing business owners cited their large costs to operate, including the high costs of the tow trucks, equipment and insurance, 20-30 percent of their business comes from storage, the board was told. They also make money from secondary tows, such as moving a vehicle from their lot to a body shop. If those sources of revenue are taken away, smaller companies will leave their districts and operate strictly in Hamilton County, the board was told. Source: chattanoogan.com

A Pa. man, Ryan J. Darrup, who was charged with burglarizing two tow businesses and stealing police evidence from his own impounded vehicle, had additional charges filed against him on July 26. Darrup was charged with 3 counts: firearms not to be carried without a license, possession of a controlled substance, and possession of drug paraphernalia. According to arrest papers, Darrup possessed a 9mm handgun, a cannabis vape, edible products and a variety of drug paraphernalia. The items were inside Darrup’s 2012 Ford Fusion and two backpacks that were later recovered after they were stolen from inside the impound lot, according to police. Darrup allegedly broke into two tow businesses overnight in the early morning hours of July 16 and was taken into custody at about 8:30 p.m. Source: yahoo.com

Dion Bracco of Gilroy-based Bracco’s Towing and Transport will be recognized during the California Tow Truck Association’s Industry Leaders and Awards Night on Sept. 17. The ceremony will take place during the American Towman ShowPlace in Las Vegas. Bracco and Steve Sgarlato of Campbell-based Dick’s Automotive Transport will be inducted into the Rich Chappel Industry Leaders Hall, based on their “positive influence on the towing industry, without thought of recognition,” according to a press release from the CTTA.

“These towing professionals have spent their lives making significant contributions to the industry with unblemished and outstanding character,” the CTTA stated. Bracco founded Bracco’s Towing and Transport Inc. in 1992. Named the 2021 Small Business of the Year by the Gilroy Chamber of Commerce, Bracco’s Towing has the equipment to transport passenger cars to large commercial vehicles. The CTTA represents nearly 600 towing companies within California. Source: gilroydispatch.com/towingindustry-to-honor-bracco/

Tower Clarence Martin, who claimed to be on a mission to pick up scraped cars off the streets of Vallejo, Ca., was the victim of arson on July 18, when 6 cars on his property, including his tow truck, were razed. “Someone came to my store and burned all my heavy equipment,” Martin said, including his bread and butter: the 2011 Lamb 5500 Super, which he saved five years to buy.” Martin learned of the incident when a park ranger knocked on the front door of his house six blocks away at about 6:30 a.m. The ranger rescued his German Shepherd from the property. He said, “The police immediately appeared and took my dog out, and the fire department appeared and put out the fire. It could have been worse.” Martin was in the towing business for 14 years in an “old shabby” truck in

Clarence Martin started a GoFundMe campaign after his 2011 tow truck and other vehicles were set on fire. 1974. He said he saved and paid $40,000 for the destroyed truck. He said four Vallejo towing companies were closed last year, “leaving more scrapped cars in our city.” “In hopes of community support, Martin launched the GoFundMe campaign with a goal of $ 75,000. Source: timesheraldonline. com/2021/07/19/tow-truck-operatorburned-by-presumed-arson-in-vallejo/