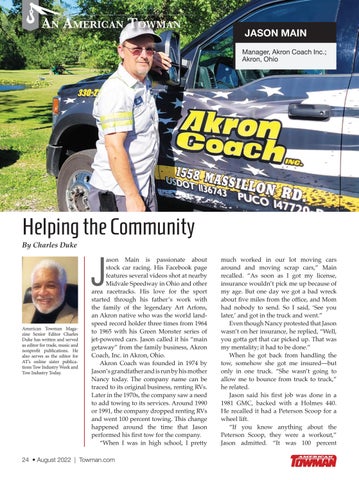 Helping the Community By Charles Duke

ason Main is passionate about stock car racing. His Facebook page features several videos shot at nearby Midvale Speedway in Ohio and other area racetracks. His love for the sport started through his father’s work with the family of the legendary Art Arfons, an Akron native who was the world landspeed record holder three times from 1964 to 1965 with his Green Monster series of jet-powered cars. Jason called it his “main getaway” from the family business, Akron Coach, Inc. in Akron, Ohio. Akron Coach was founded in 1974 by Jason’s grandfather and is run by his mother Nancy today. The company name can be traced to its original business, renting RVs. Later in the 1970s, the company saw a need to add towing to its services. Around 1990 or 1991, the company dropped renting RVs and went 100 percent towing. This change happened around the time that Jason performed his first tow for the company. “When I was in high school, I pretty

much worked in our lot moving cars around and moving scrap cars,” Main recalled. “As soon as I got my license, insurance wouldn’t pick me up because of my age. But one day we got a bad wreck about five miles from the office, and Mom had nobody to send. So I said, ‘See you later,’ and got in the truck and went.” Even though Nancy protested that Jason wasn’t on her insurance, he replied, “Well, you gotta get that car picked up. That was my mentality; it had to be done.” When he got back from handling the tow, somehow she got me insured—but only in one truck. “She wasn’t going to allow me to bounce from truck to truck,” he related. Jason said his first job was done in a 1981 GMC, backed with a Holmes 440. He recalled it had a Peterson Scoop for a wheel lift. “If you know anything about the Peterson Scoop, they were a workout,” Jason admitted. “It was 100 percent