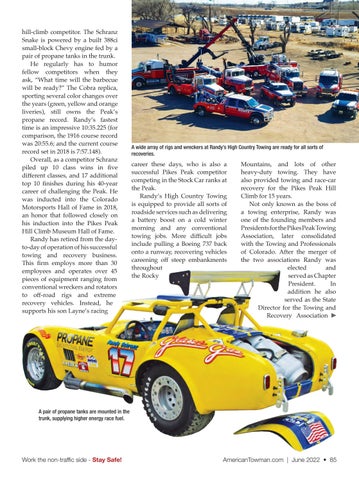 hill-climb competitor. The Schranz Snake is powered by a built 388ci small-block Chevy engine fed by a pair of propane tanks in the trunk. He regularly has to humor fellow competitors when they ask, “What time will the barbecue will be ready?” The Cobra replica, sporting several color changes over the years (green, yellow and orange liveries), still owns the Peak’s propane record. Randy’s fastest time is an impressive 10:35.225 (for comparison, the 1916 course record was 20:55.6; and the current course record set in 2018 is 7:57.148). Overall, as a competitor Schranz piled up 10 class wins in five different classes, and 17 additional top 10 finishes during his 40-year career of challenging the Peak. He was inducted into the Colorado Motorsports Hall of Fame in 2018, an honor that followed closely on his induction into the Pikes Peak Hill Climb Museum Hall of Fame. Randy has retired from the dayto-day of operation of his successful towing and recovery business. This firm employs more than 30 employees and operates over 45 pieces of equipment ranging from conventional wreckers and rotators to off-road rigs and extreme recovery vehicles. Instead, he supports his son Layne’s racing

A wide array of rigs and wreckers at Randy’s High Country Towing are ready for all sorts of recoveries.

career these days, who is also a successful Pikes Peak competitor competing in the Stock Car ranks at the Peak. Randy’s High Country Towing is equipped to provide all sorts of roadside services such as delivering a battery boost on a cold winter morning and any conventional towing jobs. More difficult jobs include pulling a Boeing 737 back onto a runway, recovering vehicles careening off steep embankments throughout the Rocky

Mountains, and lots of other heavy-duty towing. They have also provided towing and race-car recovery for the Pikes Peak Hill Climb for 15 years. Not only known as the boss of a towing enterprise, Randy was one of the founding members and Presidents for the Pikes Peak Towing Association, later consolidated with the Towing and Professionals of Colorado. After the merger of the two associations Randy was elected and served as Chapter President. In addition he also served as the State Director for the Towing and Recovery Association

A pair of propane tanks are mounted in the trunk, supplying higher energy race fuel.