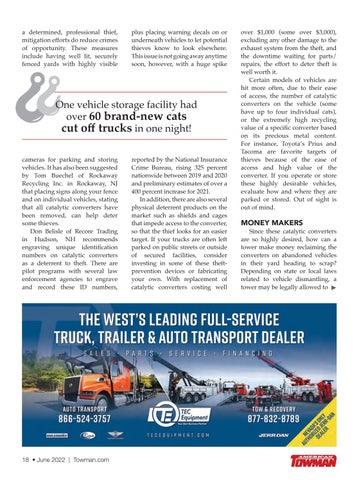 a determined, professional thief, mitigation efforts do reduce crimes of opportunity. These measures include having well lit, securely fenced yards with highly visible

plus placing warning decals on or underneath vehicles to let potential thieves know to look elsewhere. This issue is not going away anytime soon, however, with a huge spike

One vehicle storage facility had over 60 brand-new cats cut off trucks in one night! cameras for parking and storing vehicles. It has also been suggested by Tom Buechel of Rockaway Recycling Inc. in Rockaway, NJ that placing signs along your fence and on individual vehicles, stating that all catalytic converters have been removed, can help deter some thieves. Don Belisle of Recore Trading in Hudson, NH recommends engraving unique identification numbers on catalytic converters as a deterrent to theft. There are pilot programs with several law enforcement agencies to engrave and record these ID numbers,

reported by the National Insurance Crime Bureau, rising 325 percent nationwide between 2019 and 2020 and preliminary estimates of over a 400 percent increase for 2021. In addition, there are also several physical deterrent products on the market such as shields and cages that impede access to the converter, so that the thief looks for an easier target. If your trucks are often left parked on public streets or outside of secured facilities, consider investing in some of these theftprevention devices or fabricating your own. With replacement of catalytic converters costing well

over $1,000 (some over $3,000), excluding any other damage to the exhaust system from the theft, and the downtime waiting for parts/ repairs, the effort to deter theft is well worth it. Certain models of vehicles are hit more often, due to their ease of access, the number of catalytic converters on the vehicle (some have up to four individual cats), or the extremely high recycling value of a specific converter based on its precious metal content. For instance, Toyota’s Prius and Tacoma are favorite targets of thieves because of the ease of access and high value of the converter. If you operate or store these highly desirable vehicles, evaluate how and where they are parked or stored. Out of sight is out of mind.

Since these catalytic converters are so highly desired, how can a tower make money reclaiming the converters on abandoned vehicles in their yard heading to scrap? Depending on state or local laws related to vehicle dismantling, a tower may be legally allowed to