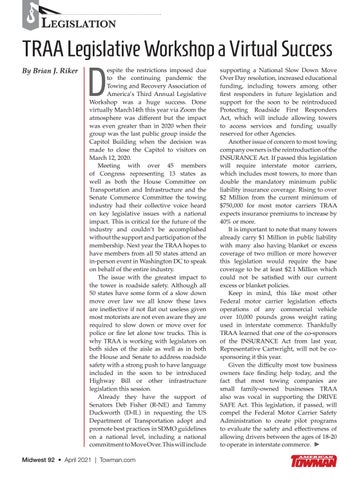 espite the restrictions imposed due to the continuing pandemic the Towing and Recovery Association of America’s Third Annual Legislative Workshop was a huge success. Done virtually March14th this year via Zoom the atmosphere was different but the impact was even greater than in 2020 when their group was the last public group inside the Capitol Building when the decision was made to close the Capitol to visitors on March 12, 2020. Meeting with over 45 members of Congress representing 13 states as well as both the House Committee on Transportation and Infrastructure and the Senate Commerce Committee the towing industry had their collective voice heard on key legislative issues with a national impact. This is critical for the future of the industry and couldn’t be accomplished without the support and participation of the membership. Next year the TRAA hopes to have members from all 50 states attend an in-person event in Washington DC to speak on behalf of the entire industry. The issue with the greatest impact to the tower is roadside safety. Although all 50 states have some form of a slow down move over law we all know these laws are ineffective if not flat out useless given most motorists are not even aware they are required to slow down or move over for police or fire let alone tow trucks. This is why TRAA is working with legislators on both sides of the aisle as well as in both the House and Senate to address roadside safety with a strong push to have language included in the soon to be introduced Highway Bill or other infrastructure legislation this session. Already they have the support of Senators Deb Fisher (R-NE) and Tammy Duckworth (D-IL) in requesting the US Department of Transportation adopt and promote best practices in SDMO guidelines on a national level, including a national commitment to Move Over. This will include

supporting a National Slow Down Move Over Day resolution, increased educational funding, including towers among other first responders in future legislation and support for the soon to be reintroduced Protecting Roadside First Responders Act, which will include allowing towers to access services and funding usually reserved for other Agencies. Another issue of concern to most towing company owners is the reintroduction of the INSURANCE Act. If passed this legislation will require interstate motor carriers, which includes most towers, to more than double the mandatory minimum public liability insurance coverage. Rising to over $2 Million from the current minimum of $750,000 for most motor carriers TRAA expects insurance premiums to increase by 40% or more. It is important to note that many towers already carry $1 Million in public liability with many also having blanket or excess coverage of two million or more however this legislation would require the base coverage to be at least $2.1 Million which could not be satisfied with our current excess or blanket policies. Keep in mind, this like most other Federal motor carrier legislation effects operations of any commercial vehicle over 10,000 pounds gross weight rating used in interstate commerce. Thankfully TRAA learned that one of the co-sponsors of the INSURANCE Act from last year, Representative Cartwright, will not be cosponsoring it this year. Given the difficulty most tow business owners face finding help today, and the fact that most towing companies are small family-owned businesses TRAA also was vocal in supporting the DRIVE SAFE Act. This legislation, if passed, will compel the Federal Motor Carrier Safety Administration to create pilot programs to evaluate the safety and effectiveness of allowing drivers between the ages of 18-20 to operate in interstate commerce.