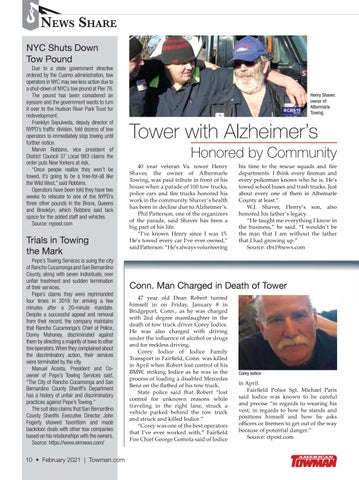 Due to a state government directive ordered by the Cuomo administration, tow operators in NYC may see less action due to a shut-down of NYC’s tow pound at Pier 76. The pound has been considered an eyesore and the government wants to turn it over to the Hudson River Park Trust for redevelopment. Franklyn Sepulveda, deputy director of NYPD’s traffic division, told dozens of tow operators to immediately stop towing until further notice. Marvin Robbins, vice president of District Council 37 Local 983 claims the order puts New Yorkers at risk. “Once people realize they won’t be towed, it’s going to be a free-for-all like the Wild West,” said Robbins. Operators have been told they have two weeks to relocate to one of the NYPD’s three other pounds in the Bronx, Queens and Brooklyn, which Robbins said lack space for the added staff and vehicles. Source: nypost.com

Trials in Towing the Mark

Pepe’s Towing Services is suing the city of Rancho Cucamonga and San Bernardino County, along with seven individuals, over unfair treatment and sudden termination of their services. Pepe’s claims they were reprimanded four times in 2018 for arriving a few minutes after a 20-minute mandate. Despite a successful appeal and removal from their record, the company maintains that Rancho Cucamonga’s Chief of Police, Donny Mahoney, discriminated against them by directing a majority of tows to other tow operators. When they complained about the discriminatory action, their services were terminated by the city. Manuel Acosta, President and Coowner of Pepe’s Towing Services said, “The City of Rancho Cucamonga and San Bernardino County Sheriff’s Department has a history of unfair and discriminatory practices against Pepe’s Towing.” The suit also claims that San Bernardino County Sheriffs Executive Director John Fogerty showed favoritism and made backdoor deals with other tow companies based on his relationships with the owners. Source: https://www.einnews.com/

40 year veteran Va. tower Henry Shaver, the owner of Albermarle Towing, was paid tribute in front of his house when a parade of 100 tow trucks, police cars and fire trucks honored his work in the community. Shaver’s health has been in decline due to Alzheimer’s. Phil Patterson, one of the organizers of the parade, said Shaver has been a big part of his life. “I’ve known Henry since I was 15. He’s towed every car I’ve ever owned,” said Patterson. “He’s always volunteering

his time to the rescue squads and fire departments. I think every fireman and every policeman knows who he is. He’s towed school buses and trash trucks. Just about every one of them in Albemarle County at least.” W.J. Shaver, Henry’s son, also honored his father’s legacy. “He taught me everything I know in the business,” he said. “I wouldn’t be the man that I am without the father that I had growing up.” Source: cbs19news.com

Conn. Man Charged in Death of Tower 47 year old Dean Robert turned himself in on Friday, January 8 in Bridgeport, Conn., as he was charged with 2nd degree manslaughter in the death of tow truck driver Corey Iodice. He was also charged with driving under the influence of alcohol or drugs and for reckless driving. Corey Iodice of Iodice Family Transport in Fairfield, Conn. was killed in April when Robert lost control of his BMW, striking Iodice as he was in the process of loading a disabled Mercedes Benz on the flatbed of his tow truck. State police said that Robert “lost control for unknown reasons while traveling in the right lane, struck a vehicle parked behind the tow truck and struck and killed Iodice.” “Corey was one of the best operators that I’ve ever worked with,” Fairfield Fire Chief George Gomola said of Iodice

in April. Fairfield Police Sgt. Michael Paris said Iodice was known to be careful and precise “in regards to wearing his vest; in regards to how he stands and positions himself and how he asks officers or firemen to get out of the way because of potential danger.” Source: ctpost.com