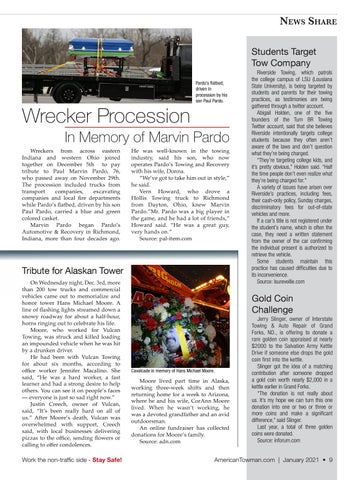 Pardo’s flatbed, driven in procession by his son Paul Pardo.

In Memory of Marvin Pardo

Wreckers from across eastern Indiana and western Ohio joined together on December 5th to pay tribute to Paul Marvin Pardo, 76, who passed away on November 29th. The procession included trucks from transport companies, excavating companies and local fire departments while Pardo’s flatbed, driven by his son Paul Pardo, carried a blue and green colored casket. Marvin Pardo began Pardo’s Automotive & Recovery in Richmond, Indiana, more than four decades ago.

He was well-known in the towing industry, said his son, who now operates Pardo’s Towing and Recovery with his wife, Donna. “We’ve got to take him out in style,” he said. Vern Howard, who drove a Hollis Towing truck to Richmond from Dayton, Ohio, knew Marvin Pardo.”Mr. Pardo was a big player in the game, and he had a lot of friends,” Howard said. “He was a great guy, very hands on.” Source: pal-item.com

Tribute for Alaskan Tower On Wednesday night, Dec. 3rd, more than 200 tow trucks and commercial vehicles came out to memorialize and honor tower Hans Michael Moore. A line of flashing lights streamed down a snowy roadway for about a half-hour, horns ringing out to celebrate his life. Moore, who worked for Vulcan Towing, was struck and killed loading an impounded vehicle when he was hit by a drunken driver. He had been with Vulcan Towing for about six months, according to office worker Jennifer Macalino. She said, “He was a hard worker, a fast learner and had a strong desire to help others. You can see it on people’s faces — everyone is just so sad right now.” Justin Creech, owner of Vulcan, said, “It’s been really hard on all of us.” After Moore’s death, Vulcan was overwhelmed with support, Creech said, with local businesses delivering pizzas to the office, sending flowers or calling to offer condolences.

Riverside Towing, which patrols the college campus of LSU (Lousiana State University), is being targeted by students and parents for their towing practices, as testimonies are being gathered through a twitter account. Abigail Holden, one of the five founders of the Turn BR Towing Twitter account, said that she believes Riverside intentionally targets college students because they often aren’t aware of the laws and don’t question what they’re being charged. “They’re targeting college kids, and it’s pretty obvious,” Holden said. “Half the time people don’t even realize what they’re being charged for.”  A variety of issues have arisen over Riverside’s practices, including fees, their cash-only policy, Sunday charges, discriminatory fees for out-of-state vehicles and more. If a car’s title is not registered under the student’s name, which is often the case, they need a written statement from the owner of the car confirming the individual present is authorized to retrieve the vehicle. Some students maintain this practice has caused difficulties due to its inconvenience. Source: lsureveille.com

Moore lived part time in Alaska, working three-week shifts and then returning home for a week to Arizona, where he and his wife, CorAnn Moore lived. When he wasn’t working, he was a devoted grandfather and an avid outdoorsman. An online fundraiser  has collected donations for Moore’s family. Source: adn.com

Jerry Slinger, owner of Interstate Towing & Auto Repair of Grand Forks, ND., is offering to donate a rare golden coin appraised at nearly $2000 to the Salvation Army Kettle Drive if someone else drops the gold coin first into the kettle. Slinger got the idea of a matching contribution after someone dropped a gold coin worth nearly $2,000 in a kettle earlier in Grand Forks. “The donation is not really about us. It’s my hope we can turn this one donation into one or two or three or more coins and make a significant difference,” said Slinger. Last year, a total of three golden coins were donated. Source: inforum.com