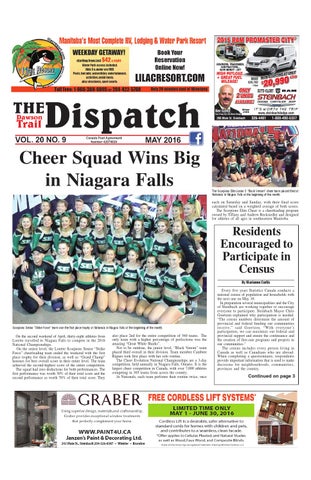 The Scorpions Elite Junior 3 “Black Venom” cheer team placed third at Nationals in Niagara Falls at the beginning of the month.

each on Saturday and Sunday, with their final score calculated based on a weighted average of both scores. The Scorpions Elite Cheer is a cheerleading program owned by Tiffany and Andrew Recksiedler and designed for athletes of all ages in southeastern Manitoba.

Residents Encouraged to Participate in Census By Marianne Curtis

Scorpions Senior “Strike Force” team won the first place trophy at Nationals in Niagara Falls at the beginning of the month.

On the second weekend of April, thirty-eight athletes from Lorette travelled to Niagara Falls to compete in the 2016 National Championships. On the senior level, the Lorette Scorpions Senior “Strike Force” cheerleading team ended the weekend with the first place trophy for their division, as well as “Grand Champ” honours for best overall score in their entire level. The team achieved the second-highest score of the entire competition. The squad had zero deductions for both performances. The first performance was worth 30% of their total score and the second performance as worth 70% of their total score. They

also place 2nd for the entire competition of 360 teams. The only team with a higher percentage of perfections was the amazing “Great White Sharks”. Not to be outdone, the junior level, “Black Venom” team placed third overall in their division. Team member Cambree Rigaux took first place with her solo routine. The Cheer Evolution National Championships are a 3-day competition, held annually in Niagara Falls, Ontario. It is the largest cheer competition in Canada, with over 7,000 athletes competing in 365 teams from across the country. At Nationals, each team performs their routine twice, once

Every five years Statistics Canada conducts a national census of population and households with the next one on May 10. In preparation several municipalities and the City of Steinbach are working together to encourage everyone to participate. Steinbach Mayor Chris Goertzen explained why participation is needed. “The census numbers determine the amount of provincial and federal funding our communities receive,” said Goertzen. “With everyone’s participation, we can maximize our federal and provincial support and ensure the continuance and the creation of first-rate programs and projects in our communities.” The census includes every person living in Canada as well as Canadians who are abroad. When completing a questionnaire, respondents provide important information that is used to make decisions for neighbourhoods, communities, provinces and the country.