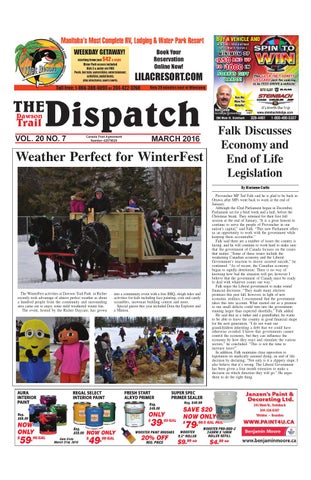 The WinterFest activities at Dawson Trail Park in Richer recently took advantage of almost perfect weather as about a hundred people from the community and surrounding area came out to enjoy some mild weathered winter fun. The event, hosted by the Richer Daycare, has grown

into a community event with a free BBQ, sleigh rides and activities for kids including face painting, coin and candy scrambles, snowman building contest and more. Special guests this year included Dora the Explorer and a Minion.

Provencher MP Ted Falk said he is glad to be back in Ottawa after MPs went back to work at the end of January. Although the 42nd Parliament began in December, Parliament sat for a brief week and a half, before the Christmas break. They returned for their first full session at the end of January. “It is a great honour to continue to serve the people of Provencher in our nation’s capital,” said Falk. “This new Parliament offers us an opportunity to work with the government while keeping them accountable.” Falk said there are a number of issues the country is facing, and he will continue to work hard to make sure that the government of Canada focuses on the issues that matter. “Some of these issues include the weakening Canadian economy and the Liberal Government’s reaction to doctor assisted suicide,” he continued. “As of recent, the Canadian economy began to rapidly deteriorate. There is no way of knowing how bad the situation will get, however I believe that the government of Canada must be ready to deal with whatever comes our way.” Falk urges the Liberal government to make sound financial decisions. “They made many election promises this past fall, however, in light of new economic realities; I recommend that the government takes this into account. What started out as a promise to run small deficits could turn into the government running larger than expected shortfalls,” Falk added. He said that as a father and a grandfather, he wants to be able to leave the country in good financial shape for the next generation. “I do not want our grandchildren inheriting a debt that we could have otherwise avoided. I know that governments cannot control the economy, but they can influence the economy by how they react and stimulate the various sectors,” he concluded. “This is not the time to increase taxes!” In addition, Falk maintains clear opposition to legislation on medically assisted dying, an end of life decision by declaring, “Not only is it a slippery slope, I also believe that it’s wrong. The Liberal Government has been given a four month extension to make a decision on which direction they will go.” He urges them to do the right thing.