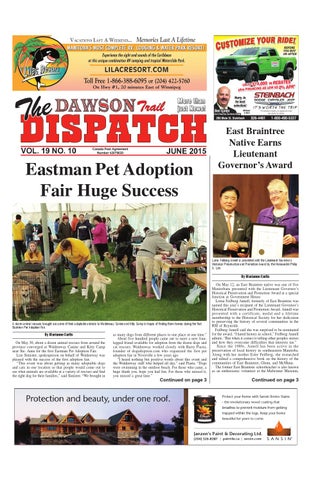 Lorna Feilberg Annell is presented with the Lieutenant Governor’s Historical Preservation and Promotion Award by the Honourable Philip S. Lee.

A dozen animal rescues brought out some of their adoptable animals to Waldenway Canine and Kitty Camp in hopes of finding them homes during the first Eastman Pet Adoption Fair.

By Marianne Curtis On May 30, about a dozen animal rescues from around the province converged at Waldenway Canine and Kitty Camp near Ste. Anne for the first Eastman Pet Adoption Fair. Lise Simister, spokesperson on behalf of Waldenway was pleased with the success of the first adoption fair. “This event was about getting as many adoptable dogs and cats in one location so that people would come out to see what animals are available at a variety of rescues and find the right dog for their families,” said Simister. “We brought in

as many dogs from different places to one place at one time.” About five hundred people came out to meet a new fourlegged friend available for adoption from the dozen dogs and cat rescues. Waldenway worked closely with Barry Piasta, founder of dogadoption.com who organized the first pet adoption fair in Niverville a few years ago. “I heard nothing but positive words about this event and the Waldenway staff who helped all day,” said Piasta. “Dogs were swimming in the outdoor beach. For those who came, a huge thank you, hope you had fun. For those who missed it, you missed a great time.”

On May 12, an East Braintree native was one of five Manitobans presented with the Lieutenant Governor’s Historical Preservation and Promotion Award at a special function at Government House. Lorna Feilberg Annell, formerly of East Braintree was named this year’s recipient of the Lieutenant Governor’s Historical Preservation and Promotion Award. Annell was presented with a certificate, medal and a lifetime membership to the Historical Society for her dedication to preserving the history of several communities in the RM of Reynolds. Feilberg Annell said she was surprised to be nominated for the award. “I hated history in school,” Feilberg Annell admits. “But when it comes to telling other peoples stories and how they overcome difficulties that interests me.” Since the 1980s, Annell has been active in the preservation of local history in southeastern Manitoba. Along with her mother Ester Feilberg, she researched and edited a comprehensive book on the history of the communities of East Braintree, Glenn, and McMunn. The former East Braintree schoolteacher is also known as an enthusiastic volunteer at the Midwinter Museum,