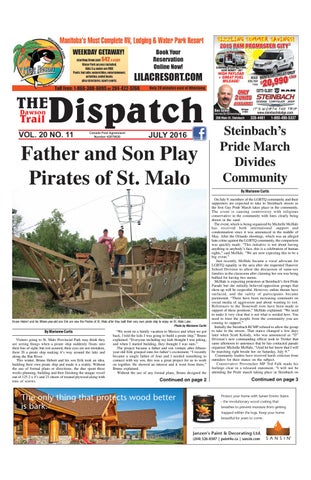 “We went on a family vacation to Mexico and when we got back, I told the kids I was going to build a pirate ship,” Bruno explained. “Everyone including my kids thought I was joking, and when I started building, they thought I was nuts.” The project became a father and son venture after fifteenyear-old Erik grasped onto his father’s excitement. “I recently became a single father of four and I needed something to connect with my son, this was a great project for us to work on together. He showed an interest and it went from there,” Bruno explained. Without the use of any formal plans, Bruno designed the

On July 9, members of the LGBTQ community and their supporters are expected to take to Steinbach streets as the first Gay Pride March takes place in the community. The event is causing controversy with religious conservative in the community with lines clearly being drawn in the sand. The event, which is being organized by Michelle McHale has received both international support and condemnation since it was announced in the middle of May. After the Orlando shootings, which was an alleged hate crime against the LGBTQ community, the comparison was quickly made. “This initiative is not about having anything in anybody’s face, this is a celebration of human rights,” said McHale. “We are now expecting this to be a big event.” Just recently, McHale became a vocal advocate for LGBTQ equality in the area after she requested Hanover School Division to allow the discussion of same-sex families in the classroom after claiming her son was being bullied for having two moms. McHale is expecting protestors at Steinbach’s first Pride Parade but she initially believed opposition groups that show up will be respectful. However, online threats have surfaced, and the safety of participants became paramount. “There have been increasing comments on social media of aggression and about wanting to riot. References to the Stonewall riots have been made in support of these positions,” McHale explained. “We need to make it very clear that is not what is needed here. You need to trust the people from the community you are coming to support.” Initially the Steinbach RCMP refused to allow the group to take to the streets. That stance changed a few days later when Scott Kolody, who was announced as “D” Division’s new commanding officer took to Twitter that same afternoon to announce that he has contacted parade organizer Michelle McHale, “\And let her know that I will be marching right beside her on Saturday, July 9.” Community leaders have received harsh criticism from outsiders for their stance on the subject. Conservative Provencher MP Ted Falk made his feelings clear in a released statement. “I will not be attending the Pride march taking place in Steinbach on

Bruno Hebert and his fifteen-year-old son Erik are now the Pirates of St. Malo after they built their very own pirate ship to enjoy on St. Malo Lake. Photo by Marianne Curtis

By Marianne Curtis Visitors going to St. Malo Provincial Park may think they are seeing things when a pirate ship suddenly floats into their line of sight, but rest assured, their eyes are not mistaken, there IS a pirate ship making it’s way around the lake and along the Rat River. This winter, Bruno Hebert and his son Erik took an idea, building their own pirate ship and made it a reality. Without the use of formal plans or directions, the duo spent three weeks planning, building and then finishing the unique vessel out of 125 2 x 4’s and 21 sheets of treated plywood along with tons of screws.