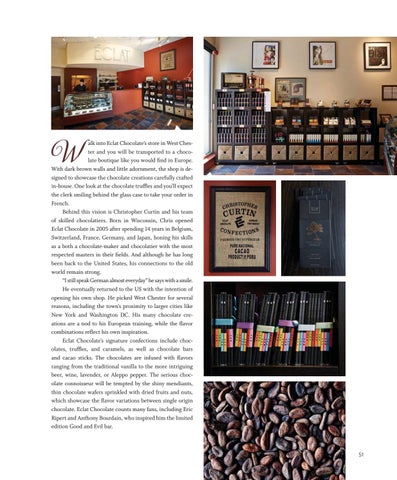 alk into Eclat Chocolate’s store in West Chester and you will be transported to a chocolate boutique like you would ﬁnd in Europe. With dark brown walls and little adornment, the shop is designed to showcase the chocolate creations carefully crafted in-house. One look at the chocolate truffles and you’ll expect the clerk smiling behind the glass case to take your order in French. Behind this vision is Christopher Curtin and his team of skilled chocolatiers. Born in Wisconsin, Chris opened Eclat Chocolate in 2005 after spending 14 years in Belgium, Switzerland, France, Germany, and Japan, honing his skills as a both a chocolate-maker and chocolatier with the most respected masters in their ﬁelds. And although he has long been back to the United States, his connections to the old world remain strong. “I still speak German almost everyday” he says with a smile. He eventually returned to the US with the intention of opening his own shop. He picked West Chester for several reasons, including the town’s proximity to larger cities like New York and Washington DC. His many chocolate creations are a nod to his European training, while the ﬂavor combinations reﬂect his own inspiration. Eclat Chocolate’s signature confections include chocolates, truffles, and caramels, as well as chocolate bars and cacao sticks. The chocolates are infused with ﬂavors ranging from the traditional vanilla to the more intriguing beer, wine, lavender, or Aleppo pepper. The serious chocolate connoisseur will be tempted by the shiny mendiants, thin chocolate wafers sprinkled with dried fruits and nuts, which showcase the ﬂavor variations between single origin chocolate. Eclat Chocolate counts many fans, including Eric Ripert and Anthony Bourdain, who inspired him the limited edition Good and Evil bar.