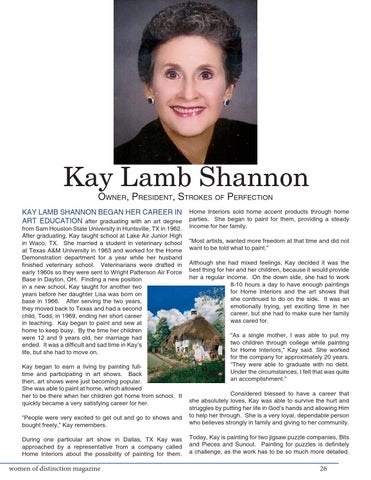 KAY LAMB SHANNON BEGAN HER CAREER IN ART EDUCATION after graduating with an art degree from Sam Houston State University in Huntsville, TX in 1962. #HVGT ITCFWCVKPI -C[ VCWIJV UEJQQN CV .CMG #KT ,WPKQT *KIJ in Waco, TX. She married a student in veterinary school at Texas A&amp;M University in 1963 and worked for the Home Demonstration department for a year while her husband ĹżPKUJGF XGVGTKPCT[ UEJQQN 8GVGTKPCTKCPU YGTG FTCHVGF KP early 1960s so they were sent to Wright Patterson Air Force Base in Dayton, OH. Finding a new position in a new school, Kay taught for another two years before her daughter Lisa was born on base in 1966. After serving the two years, they moved back to Texas and had a second child, Todd, in 1969, ending her short career in teaching. Kay began to paint and sew at home to keep busy. By the time her children were 12 and 9 years old, her marriage had GPFGF +V YCU C FKHĹżEWNV CPF UCF VKOG KP -C[Ĺ?U life, but she had to move on. Kay began to earn a living by painting fulltime and participating in art shows. Back then, art shows were just becoming popular. She was able to paint at home, which allowed her to be there when her children got home from school. It quickly became a very satisfying career for her.

Home Interiors sold home accent products through home parties. She began to paint for them, providing a steady income for her family. â&amp;#x20AC;&amp;#x153;Most artists, wanted more freedom at that time and did not want to be told what to paint.â&amp;#x20AC;? Although she had mixed feelings, Kay decided it was the best thing for her and her children, because it would provide her a regular income. On the down side, she had to work 8-10 hours a day to have enough paintings for Home Interiors and the art shows that she continued to do on the side. It was an emotionally trying, yet exciting time in her career, but she had to make sure her family was cared for. â&amp;#x20AC;&amp;#x153;As a single mother, I was able to put my two children through college while painting for Home Interiors,â&amp;#x20AC;? Kay said. She worked for the company for approximately 20 years. â&amp;#x20AC;&amp;#x153;They were able to graduate with no debt. Under the circumstances, I felt that was quite an accomplishment.â&amp;#x20AC;?

Considered blessed to have a career that she absolutely loves, Kay was able to survive the hurt and struggles by putting her life in Godâ&amp;#x20AC;&amp;#x2122;s hands and allowing Him to help her through. She is a very loyal, dependable person who believes strongly in family and giving to her community.

During one particular art show in Dallas, TX Kay was approached by a representative from a company called Home Interiors about the possibility of painting for them.

Today, Kay is painting for two jigsaw puzzle companies, Bits CPF 2KGEGU CPF 5WPQWV 2CKPVKPI HQT RW\\NGU KU FGĹżPKVGN[ a challenge, as the work has to be so much more detailed.