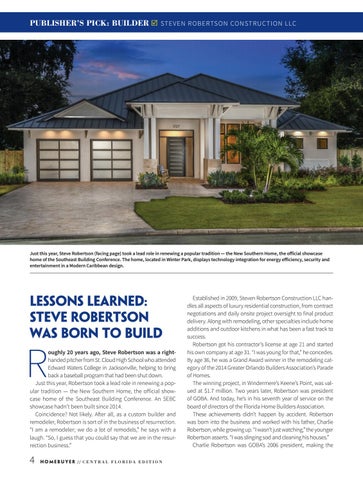 oughly 20 years ago, Steve Robertson was a righthanded pitcher from St. Cloud High School who attended Edward Waters College in Jacksonville, helping to bring back a baseball program that had been shut down. Just this year, Robertson took a lead role in renewing a popular tradition — the New Southern Home, the official showcase home of the Southeast Building Conference. An SEBC showcase hadn’t been built since 2014. Coincidence? Not likely. After all, as a custom builder and remodeler, Robertson is sort of in the business of resurrection. “I am a remodeler; we do a lot of remodels,” he says with a laugh. “So, I guess that you could say that we are in the resurrection business.”

Established in 2009, Steven Robertson Construction LLC handles all aspects of luxury residential construction, from contract negotiations and daily onsite project oversight to final product delivery. Along with remodeling, other specialties include home additions and outdoor kitchens in what has been a fast track to success. Robertson got his contractor’s license at age 21 and started his own company at age 31. “I was young for that,” he concedes. By age 36, he was a Grand Award winner in the remodeling category of the 2014 Greater Orlando Builders Association’s Parade of Homes. The winning project, in Windermere’s Keene’s Point, was valued at $1.7 million. Two years later, Robertson was president of GOBA. And today, he’s in his seventh year of service on the board of directors of the Florida Home Builders Association. These achievements didn’t happen by accident. Robertson was born into the business and worked with his father, Charlie Robertson, while growing up. “I wasn’t just watching,” the younger Robertson asserts. “I was slinging sod and cleaning his houses.” Charlie Robertson was GOBA’s 2006 president, making the

The New Southern Home is as beautiful inside as it is outside, as evidenced by the great room (above) and the kitchen and master bath (facing page). The home is certified green by the Florida Green Building Coalition, whose program uses Florida-specific criteria in determining its standards.

Robertsons only the second father and son to head up the association since its founding in 1953. The elder Robertson did more than teach his son to sling sod. He imparted important lessons about the importance of relationships, particularly with subcontractors. “You try to maintain those relationships as long as you can — loyalty to your trades,” Steve Robertson says. “You’re building a team, basically.” That same approach, in fact, guided Robertson through Edward Waters College, the first independent institution of higher education in Florida and the state’s first HBCU (historically black college or university). He attended by taking advantage of a full athletic scholarship as the baseball program was reestablished and diversified. “That was a fun time and an interesting time,” says Robertson, adding that his roommate and teammate during those days remains a close friend. As he did in college, Robertson has continued to adjust and advance, deftly taking on challenges. When he started his company, the economy was in freefall and the building indus-

try was on the ropes. So, Robertson focused on remodeling, which “kept me going.” And when the topic of restarting the New Southern Home came up — a conversation Robertson initiated — he told officials: “‘I’ll take on the project; I’ll get the program up and running.’ I thought it would be a cool thing to re-create that program. People enjoy it.” In the end, the Caribbean-influenced show home, located in Winter Park, was a hit, displaying technology integration for energy efficiency, security and entertainment. Not surprisingly, by the way, Robertson was the project manager in 2008, when his father built that year’s New American Home for the National Association of Home Builders. All the while, Robertson has kept his business philosophy pretty simple. “I want to be known for honesty,” he says. “And for being easy to work with. Being friendly. Being accommodating. Being respectful. Building relationships. I want people to be happy with the experience. I want it to even be enjoyable.”  — Michael Candelaria