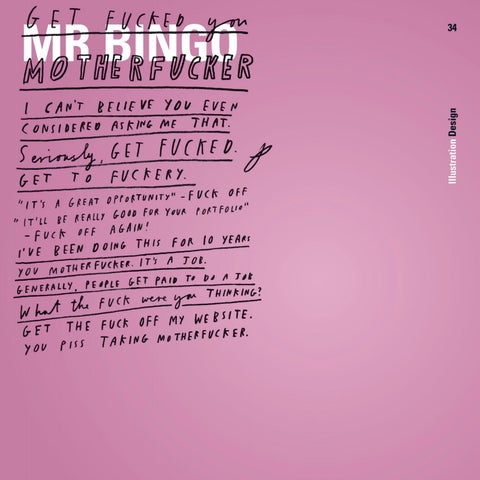 An email exchange about Hate Mail. duncan.e.roberts@gmail.com: You have been drawing humorous illustrations since you were a young boy – was it for your own amusement or was it, as you once said, attention seeking?

bingo@mr-bingo.org.uk: For both I think. I’ve always found drawing a really nice way to spend time, but when I discovered that people were actually interested in the drawings, it gave me an extra incentive to keep doing them. How important is irreverence to your humour? Are any subjects taboo?

Humour doesn’t have to be irreverent, but yes I’m sure it plays a big part in a lot of the stuff I do. I don’t mind offending people but I do have a few taboo subjects which are racism, disability and sexuality. I also tend to avoid poking fun at the religions that kill you if you offend them. You once wrote: “My existence is simple. I serve to entertain and amuse”. Do you get upset if people don’t react to your work as you hope?

To be honest I only ever really hear about the good reactions. The people who hate my work very rarely get in touch, which is lucky for me. I think I’ve had two bad reviews in the past 15 years. The pathetic thing is that I remember both of their names!

You are an avid postcard collector. What is it about postcards and their design that so fascinates you? Where do you find them?

I can’t explain it really; I think it’s something nostalgic about the imagery on old postcards. The backs are also fascinating when they’re filled in, you get this odd voyeuristic look into a tiny snapshot of a stranger’s life. I find them in junk shops, antique shops and official postcard fairs. There are also plenty on eBay of course, but they’re really expensive online. The idea for Hate Mail came after you had had a few drinks. Did you expect such a response to your original tweet offering the first insult postcard?

No, I didn’t expect anything really. Why do you think so many people bought in to the idea of Hate Mail? Have you had many people tell you they wish they had thought of the idea first?

I think people just find it really funny, and it’s fairly original as an idea. It’s daft and fun escapism from the mundanity of day to day life. The more creative Hate Mail postcards are probably the ones that eschew swear words – how difficult was it to come up with fresh and original insults without simply resorting to the word “cunt” or “fuck”?

It’s like any kind of creative challenge, sometimes you find it difficult and then other times, the ideas just seem to flow. It definitely got harder the more I did, especially as I was approaching 1000, I was really starting to run out of ideas. The challenge was also nice though, to see how far you can push a single stupid idea.

The only one to e was a drawing o with ‘FUCK DAVE It arrived, but wit the word ‘FUCK’. choice as the ‘CU through as far as

ever be censored of a billboard E KINGETT’. th a sticker over It was an odd UNTS’ made it s I know.

How do you react when people view your work as art or try to overanalyse its social significance?

I’m flattered, but not very interested. Your Hate Mail works employ a quite eclectic mix of styles – do you get bored of drawing in one “genre”?

Yes, especially as this is all self-initiated work. It’s nice because there’s no client involved, so nothing is ‘wrong’ and it means you can afford to experiment and just play. If you set yourself a brief and then it becomes boring, you’ve really fucked up! You have done quite a bit of rapping. Are there any other disciplines that you would like to add to your bow?

Writing, singing and making music. You recently posted on Twitter a drawing you did in the late 1980s, and I was reminded of Savage Pencil. The “arse face” Hate Mail postcard brought to mind Bill Plympton. Did you have any early influences as an illustrator? Are there any other illustrators or artists whose work you particularly admire?

Comedy wise, Monty Python’s Flying Circus and anything by Chris Morris is an influence. Illustration wise, Paul Davis, David Shrigley and Oliver Jeffers are influences. Not sure if he influences my work, but I really love David Hockney. I’d like to look at more art, but I’ve tended to live in my own little bubble for most of my life, just throwing stuff out there and not really paying much attention to what else is going on. The playful offensiveness of the Hate Mail project makes your work stand out. But how difficult is it to be truly original these days?

I think most people, including me, really struggle with the idea of trying to be original. It does seem difficult given the amount of ‘stuff’ that’s been done, but it’s always possible!

You have said you try to create work that you enjoy, even when given a brief by a client. How different is your creative process when doing commercially commissioned work from that you use for personal projects?

When I worked for clients, my process was to try and come up with something I wanted to draw that also solved the brief and then I had to ‘sell’ that idea to the client to trick them into thinking it was exactly what they wanted. When I do personal work it’s just a blank canvas and 100% creative freedom to do whatever I want. The only downside is the lack of constraints can sometimes be so overwhelming that you risk ending up with nothing! You have a programme of speaking engagements all around the world-from Sydney to Moscow via Luxembourg and Brighton. Is public speaking something you enjoy, or do you view it as a necessary promotional tool?

It’s something that I enjoy doing a lot. I’m not blind to the fact that there is a promotional benefit to it, but I don’t think it’s a necessity. Most creative people are terrified to talk about what they do on stage – and they should be, it’s a ridiculous thing to do! But there are plenty of other ways to self promote, especially online. Your talk in Luxembourg is titled “37 things I’ve learnt”. That’s a very specific number – was it chosen because it matches your age?

Ha! I totally didn’t realise that, well pointed out. No, it was just the number of things that I thought of. Do you believe, like many, that mistakes are golden and the best way to learn? Do you always act on things you’ve learnt?

I don’t know as I’ve never made a mistake. Seriously, yes of course. Without mistakes, it’s very hard to progress.

The Kickstarter campaign for the book was a huge success, but you have said you had problems fulfilling the rewards in time. Would you recommend Kickstarter to other designers and illustrators looking to fund a project, and what advice would you give them to make their campaign successful?

It’s not for everyone, but yes I’d definitely recommend it. A few quick tips: 1. Think about how much contingency you think you need in terms of budget, timing, etc. Then FUCKING TRIPLE IT. 2. Don’t underestimate the weight of thousands of backers waiting for the thing that you promised them. 3. Make your campaign bulletproof. Think of every single negative question you might get and try to answer it on your campaign page, like an FAQ. 4. Be honest and genuine. I was chatting to Zach‘ Danger’ Brown (who famously kickstarted the $55,000 potato salad) and he said that “the internet is really, really good at detecting bullshit”, which I totally agree with. If you’re not genuine, people will call it out very quickly. Did the Hate Mail project end last Christmas, as you said it would? Will it ever be revived?

Yes, I had to stop doing them, otherwise I’d never have time to do anything new. I still get requests almost every day, it’s crazy. Finally, what’s next for Mr Bingo?

An advent calendar and new online shopping experience. I like walking up mountains as well. I’m going to do more of that.

Over the last fifteen years Mr Bingo has worked with hundreds of clients across a wide range of media; you might have seen his illustrations in TIME, Esquire, QI, The Mighty Boosh, The New York Times and on Channel 4. He is a regular in the New Yorker. 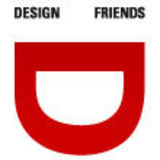