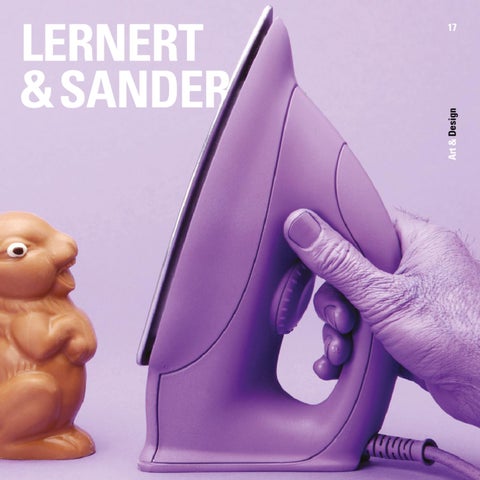 Cover: Chocolate Bunny A film by Lernert & Sander Commissioned by Cut â&#x20AC;&#x2DC;n Paste for KRO-television in association with the Dutch Culture Fund (2007)

lernert & sander are two dutch artists and friends who decided that working alone was getting boring and started collaborating on art related projects. since their first video â&#x20AC;&#x153;Chocolate Bunnyâ&#x20AC;&#x153; theyâ&#x20AC;&#x2122;ve been working on commercials, leaders, art movies, documentaries and installations. Their aim is to make simple and communicative works, that takes little note of the existing border between contemporary art and commercial projects. Their highly aesthetic, humorous and dedicated works often challenge the media and viewers in a simple but very effective way. Their work was selected for international festivals in new York, rio de Janeiro and Oberhausen.

To reference one of your projects right away: How do you explain what you do to your parents? We don’t. When we are at our parents’ we talk about the amazing progression the apple tree has made in the garden. Or we discuss the tragic sudden death of a neighbour: “He was just 82! It’s a tragedy.” We like to think our work is pretty self explanatory, or maybe this is just an assumption. If we talk about work at our parents’ it is more likely to be about commercial or assigned work. It is very unlikely one of us brings up the intention or ‘deeper’ meaning of, for instance, a project such as “The Lost & Found Collection”. For this project we collected lost and found clothing in various Amsterdam darkrooms, dressed ourselves with the pants, shirts and shoes we gathered, and finally posed for a photo. (For all non-homosexual readers: we are not talking about photography development rooms but the back rooms of certain gay establishments.)

The visual world of lernert & sander seems to be a beautiful, yet quirky place. what are the key ingredients from your point of view? Well, that all depends on the idea and the project. We don’t want our story to be distracted by extravagant decor or unnecessary editing. We like to stick to the core of the idea. So we often end up in an abstract world in which we can focus on the protagonist and its story. Most of the time it is quirky through uneasiness. To get back to the documentary series “How To Explain It To My Parents” that you mentioned before; we set up a sparsely furnished room within a greyish scenography in which the protagonists – nine abstract artists attempting to explain their work to their mums and dads – were portrayed. For Kenzo we created an installation of blinds with the colours of its collection. do you remember the day the idea for the selfridges window display series came about? what was – to quote Cartier-Bresson – your decisive moment? How did the idea develop from there to the final result?

Right and next double page: selfridges A series of window displays by Lernert & Sander Commissioned by Selfridges (2010)

While working on the Selfridges project we worked on two other projects simultaneously – three films for optician Pearle in which we created the world’s biggest pop up book, and on Sikkens Prize Jubilee book. Three different media at the same time. We took walks during lunch in the Vondelpark on the days prior to delivering the idea for the windows. And, as it always goes, an hour before the promised first sketch we had the notion it had to be this and only this. We just didn’t have more time to torture ourselves with more thinking. Selfridges’ initial brief was to create a window display series for the launch of its new shoe department in London. We came up with shoes of varying scales – huge, surreal sculptural installations to be precise – made out of household products. We have taken the most mundane of household domestic appliances and comically refashioned them into divine creations. We at first thought the idea of creating shoes out of objects from the housewives’ daily grind was maybe a

bit misogynous. We honestly thought we would hear back from Selfridges with a polite “no thank you”. Initially the brief to create windows for the new shoe gallery was for four windows, and it was a complete surprise the expected “No” was a “yes please; and we want 11 windows instead of four”. To get to the very sharp images you are creating i assume there is a longer process of sketches, mock-ups and experiments. Could you describe your way of working in general – and more specifically for the music video of the elektrotechniek song? The fun with Elektrotechniek was to come up with all these different sex machines linked to all these different fetishes. The whole process of creation was quite organic. The idea was to make a series of domestic sex machines out of ordinary objects and household appliances such as vacuum cleaners, record players and suitcases. When the band De Jeugd Van Tegenwoordig approved our concept we made 14 sketches of possible installations and started to collect all the different machines

and parts. But because there was a very small budget we sometimes needed to adjust the machine to the equipment we found. And all tested the movements in our studio before painting them in the skin colours of the three band members. We’d love to do such a project again. We had some much fun! How would you describe the way you use colour? We use colour in a narrative function and as way to sharpen iconography of a product and as lube to pull the viewer into the idea. There are so many images out there these days that it is almost impossible to keep up with the latest developments. To what extend are you looking at other people’s work (historic / contemporary) for reference? what was the last movie or animation that really impressed you and why? We never search the web for other people’s work. Of course we see films by other directors we admire. But we believe in getting inspiration form a

walk or a book or a museum, instead of diving into the garbage belt of the internet. Lots of students nowadays are so used to skimming the internet for images of already designed and finished things that their own work starts to look like everything they collected. So get off the internet!!! do you run a physical archive (e.g. of your props)? what does it look like? How is it organized or how organized is it? We have a cellar in which we stock our props. But we are not that precise and neat. It’s all in crates. what was your most challenging project so far and why? which one do you consider your most successful project and how do you measure that success? Our most challenging was “CDEFGABC” because we needed to build a music instrument from scratch and compose a song and learn to play it. We built a duo glass harp and learned to play this 18th-century music instrument in less than 8 weeks. Instead of a classical

COMMiT And dediCATe YOurself TO even THe MOsT sTuPid ideAs THAT COMe TO Mind.

we were Asked TO CreATe A filM ABOuT BesPOke TAilOring fOr THe “HAndMAde“ issue Of wAllPAPer*.

THEy HOOKED uS uP WITH THE FAMOuS ITALIAN TAILORS OF BRIONI. WE CAME uP WITH THE IDEA THAT A HAND WOuLD BE THE uLTIMATE CuSTOMER TO PROVE THE SKILLS AND CRAFTMANSHIP OF A BRAND AS BRIONI.

Handmade A short by Lernert & Sander Commissioned by Wallpaper* (2012)

piece or suchlike, we have chosen the classic 20th-century pop song “No limit” by 2unlimited – easily the worst song ever! And it was all worth the time and dedication. We don’t believe in (concept of) the most successful project. Every project has its own charm that can’t be measured by, for instance, internet clicks. Are you always working together? if not: what else do you do on the side, and what is the specific relevance, charm, impact of those projects? yes! We work together. But we have our own lives, so we’re not stuck to each other 24/7! Music, radio or silence – what is the current soundtrack in your studio? ALT-J and Deichkind. How did you come up with the name lernert & sander? Our studio name is composed of our first names, in alphabetic order. We started working together but were

initially friends. We like to share this level of intimacy and familiarity with our customers. it seems from your biographies and the range of projects that you are truly multidisciplinary, never shy to try something new. what are you trying next? what is the commission you are still waiting for? if you were to choose a lernert & sander product to work on, what would that be? We are now working on a fragrance which we will present in March 2013. We’d love to do more physical projects. Designing products, creating a more 3D world. Thank you.

we were Asked TO CreATe THe POsTers fOr THe AMsTerdAM gAY & lesBiAn filM fesTivAl. IN 2010 WE INTRODuCED JOHN & HuMPHREy AND OLIVIA & INGRID! IN 2011 WE HAD JENNIFER & JuLIA AND RICHARD & PATRICK!

duTCH newsPAPer de vOlkskrAnT Asked us TO MAke A PHOTOgrAPH fOr THeir dOCuMenTArY PHOTOgrAPHY sPeCiAl, wiTH THe THeMe fAMilY.

WE WANTED TO MAKE A PHOTO OF A BLACK SHEEP OF THE FAMILy. WE THOuGHT: IS THERE A BLACK SHEEP IN A FAMILy OF BLACK SHEEPS? WE INVITED DuTCH CHAMPION DOG GROOMING MARIEKE HOLLANDER TO SHAVE AND GROOM A BLACK SHEEP INTO A MARVELLOuS PRIzE WINNING POODLE. Blacker sheep Photography by Lernert & Sander Commissioned by de Volkskrant (2012)

we wAnTed TO APPlY 365 lAYers Of MAke-uP in One dAY TO see HOw MuCH is needed TO gO frOM A nATurAl lOOk TO An OuTrAgeOus One.

THE WHOLE PROCESS TOOK NINE HOuRS, DuRING WHICH SuPERMODEL HANNELORE KNuTS COuLDN’T MOVE AND ONLy EAT AND DRINK THROuGH A STRAW. WE uSED SEVEN BOTTLES OF FOuNDATION S103; TWO BOTTLES OF CREAMy EyES E107; THREE MILKy LIPS L205 PENS; AND TWO BOTTLES OF BLuSH S301. ALL TOGETHER 228.40ML OF MAKE-uP.

natural Beauty A film by Lernert & Sander Commissioned by Nowness (2011)

TO CeleBrATe THe 50TH AnniversArY Of THe sikkens Prize, we were inviTed TO CreATe THeir inviTATiOn And PrOgrAM Of THe dAY.

SINCE THE FIRST SIKKENS PRIzE WAS AWARDED IN 1960 TO THE ARCHITECT GERRIT RIETVELD WE STRIPPED DOWN HIS RED AND BLuE CHAIR AND CREATED 10 DIFFERENT CHAIRS. EACH CHAIR DEPICTING THE RECOGNIzABLE COLOR uSE OF DIFFERENT WINNERS OVER THE LAST 50 yEARS. ALL SET IN 50PT HELVETICA BOLD.

Lernert & Sander are two Dutch artists and friends who decided that working alone was getting boring and started collaborating on art relate...

Lernert & Sander are two Dutch artists and friends who decided that working alone was getting boring and started collaborating on art relate...