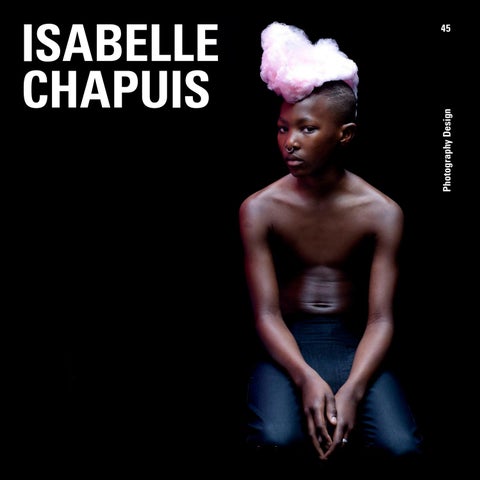 Isabelle Chapuis in conversation with Afsaneh A. Rafii

You have said that your photographic work stands somewhere between art and fashion. What draws you to fashion photography specifically?

I started photography with a fascination for Guy Bourdin and Tim Walker’s work. Fashion photography struck me as a limitless creative playing field. Over time, I have distanced myself from this idea, even if my creative language echoes fashion photography, I don’t feel particularly attached to that world. At the heart of my work, today, are individuals and a definite predilection for staging.

What is it about the human condition that triggers your interest? What facets are you trying to explore through your work? And what is it that you particularly enjoy about “mise en scène”?

I am passionate about anything that touches the individual and its relationship to the body. Our body is truth. It cannot lie or cheat, it has its own language, animal and instinctive. Learning to listen to my own body brings me closer to my authenticity and opens up a whole world full of subtle sensations that bring me joy. Photographing other people allows me to look at how they live their lives and engage with their own bodies, their skin. The skin represents the limit of our physical body while protecting it. Someone’s touch can be something that is comforting or oppressive, stimulating or threatening. Photographing someone’s face makes me feel like I am touching a part of their essence.

RITUELS 2016 A project written and realized by Isabelle Chapuis, Axelle Lagier and Julien Gaillac, for the permanent collection of the Grand Musée du Parfum

What I enjoy about staging, is the idea of starting off with known elements but then transcribing them into an imaginary world, where I play with codes, subvert them and thus create a story.

A big part of my work is the time I spend looking for my models. I like photographing people that do not have a professional relationship with their image. Their modesty touches me.

What turns photography into art in your opinion?

It really depends what you put into your photography, as anything can become an act of creation. Fashioning your daily life is in my opinion, the most powerful creative act. Photography is a tool, which serves creativity; it is a means to an end, not the end itself.

I found the Givrée series you did for Paulette magazine quite fascinating, how difficult is it to give fruition to some of the fantasies you have in your head and is it always possible to make it work?

The process that takes you from the inception of an idea to its execution is full of surprises, and sometimes disappointments, but by continuously exploring new avenues you can always find ways to bring an idea to fruition. The Givrée series is the result of some experimentation with frost. I don’t do any computer editing for any of my photographic series, and I didn’t do it for this either, it was all a result of playing around with my shots and these materials. My pleasure is in working on the staging before each shot.

Can you talk about Barbapapa? I found the juxtaposition of something as infantile and innocent as cotton candy with the rebelliousness of a rockabilly interesting.

This series refers to transitional ages. It explores codes that are associated with childhood, like cotton candy in this case, in relation to a little 9-year-old boy whose body is already (almost) that of a young adult. By combining the ephemeral quality and fragility of this melting texture with the beauty of a body that is in the midst of its development, I wanted to explore the internal contradictions we face when we pass from childhood to adolescence.

You started out in graphic design, what did you find limiting in that particular design vocation which you donâ&#x20AC;&#x2122;t come across in photography?

Looking back I realized that, even in school, I primarily used photography as a means for expression. I studied graphic design and was planning to become a graphic designer and art director. After I finished school, I realized that this was actually not my thing because I would have been too deskbound, in front of a computer. In a way, so is photography, but at least it offers more freedom. Itâ&#x20AC;&#x2122;s the art direction of an image that brought me from graphic design to photography. When I take on a commission, I actually feel that it relates pretty closely to what I studied in school, because I am creating a visual message for a specific brief. In my personal projects, my work takes a more artistic turn.

NINAHAUS 2014 A creation for the OOB Magazine nÂ°3

You often talk about how you embarked on this photographic journey after you travelled for two years. What did you take away from these trips that nurtured your ambition to become a photographer? After my studies I travelled through Asia and then settled in the Middle East. I left alone to find myself. The path to self-exploration never comes to an end, but this period allowed me to start my interior journey. In Asia, I created some photographic series that had a contemplative nature. When I arrived in Israel, I sold them to the press and was able to make my first photographic earnings!

I feel like your images have a narrative quality, is storytelling important to you or do you just want to create an emotion? Beyond storytelling you create this fantastical universe.

I like telling stories and inviting the spectator into this dream-like universe where he or she can meet imaginary shapes. But I also like the idea of provoking emotions and leaving the spectator to his own interpretation. We each have a different frame of reference. I may want to transmit certain things through my storytelling but ultimately I have no control over how things are perceived. Every person will have his or her own interpretation of the visual language and that is something I really appreciate.

The process that takes you from the inception of an idea to its execution is full of surprises, and sometimes disappointments, but by continuously exploring new avenues you can always find ways to bring an idea to fruition.

How do you think Paris feeds your aesthetic? Paris is vibrating and stimulating. Art is everywhere and it really feeds my approach to photography. But like any other urban capital, Paris is also exhausting. My inspiration also stems from my travels, and getting to know foreign cultures.

Is there a common thread in all of the stories you share through your photography? What is it about textures that fascinates you?

A common thread in all of my work is my fascination with organic textures and their infinite dimensions. On the outside they may often look supple and fragile, but in reality they are often much more robust and offer some precision to work with. Depending on the scale or the angle they can be perceived differently. They need to be observed to truly reveal their qualities. When I was a child, I used to have dreams where I would travel inside organic textures that would suddenly change in scale. I didnâ&#x20AC;&#x2122;t know if it was my body that was growing and shrinking or if it was the space around me that was changing. It was a sort of Alice in Wonderland that symbolized our relationship to individuality and our sense of belonging to the greater whole.

You often cast your models on the street. What triggers your interest in a face? What is the advantage of working with someone who has never been professionally photographed before?

I choose models in my daily life and most of them are not professional models. I really enjoy the process of meeting someone and slowly discovering them. These encounters bring me in touch with my own essence, through them I discover parts of myself. I really appreciate faces that are out of the ordinary, singular beauties, multi-coloured, and personalities that throw me off balance. A big part of my work is the time I spend looking for my models. I like photographing people that do not have a professional relationship with their image. Their modesty touches me. But I also work with professional models though, it is more about the encounter than a matter of agencies or not.

Can a face trigger an idea in your mind or is it more that you search for someone who best translates your ideas visually?

When an idea starts to flourish in my mind, I start looking for one or more models that have specific characteristics. I look out for faces on the street, on a terrace, on the trainâ&#x20AC;Ś however, there have also been times when I have been so fascinated by an individual that they have triggered a whole project. Even if my ideas often come before the model, the interaction we have is vital, it is key. Itâ&#x20AC;&#x2122;s first and foremost a human encounter before turning into a photographic rendez-vous.

I like telling stories and inviting the spectator into this dream-like universe where he or she can meet imaginary shapes. But I also like the idea of provoking emotions and leaving the spectator to his own interpretation. We each have a different frame of reference. I may want to transmit certain things through my storytelling but ultimately I have no control over how things are perceived. Ă&#x2030;LOGE DU VIVANT since 2015 work in progress

Can you walk us through your creative process? What are your production routines? When I delve into a subject, I start by drawing, writing, collecting images and informations, getting quotes, videos... and any references are welcome. I work like a funnel in a way. I start very broadly and then slowly I narrow it down and fine-tune my ideas, until I reach what I find essential. I make mood boards, which allow me to create a framework where my spirit can run free during the actual shooting. Then I start casting and gathering a team around me. Finding the right people is really important. Here the mood boards are again important because they communicate my vision to the team. Finally it is time to shoot. I really try to shoot over several days because that allows me to create a relationship with my models. After the shooting I need to step back before I can proceed with the image selection. Once the choice is made, and things become coherent, I finalise the writing. Itâ&#x20AC;&#x2122;s a long process that can sometimes take months.

What kind of stories were you into as a child?

I would draw figures in motion, bodies and faces. I drew my first nudes at the age of 7. I was already fascinated by living models. Once I reached adolescence I painted Bouddha and Christ portraits for a while. Sometimes, I would blend the faces until references and identities were became blurred. I felt an affinity to religious philosophy without becoming caught up in the dogma, which tends to be divisive. These drawings made me feel a sense of unity.

PUBLISHED WITH THE SUPPORT OF

Cotton, smoke, powder, frost, cotton candy, plants... these are the materials that Isabelle Chapuis reinterprets in her photographic work. I...

Cotton, smoke, powder, frost, cotton candy, plants... these are the materials that Isabelle Chapuis reinterprets in her photographic work. I...