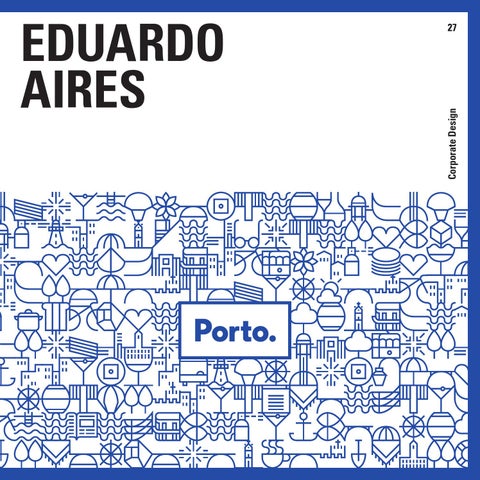 EDUARDO AIRES in conversation with ANGELINA A. RAFII

You have mentioned that design should first touch the heart, that it doesn’t need to be functional and that it is getting closer to art. I was raised in the 80s in Portugal; at that time my faculty was a melting pot between fine arts, architecture, sculpture and also design. It was very common for me to sit at a table with our famous architects like Souto de Moura and Fernando Távora and also with famous sculptors. For me design was in the end a mixture of all these things. Given my education I sometimes am closer to art than I am to design and I say that in design we have to touch the heart. When you have a design programme you have to answer questions for others, when dealing with a programme that comes from the heart you answer to yourself and your thoughts.

Do you feel like when you work for clients you can stay true to letting your heart speak or do you feel restricted because you have to fulfil a specific mission? I have worked in design for almost 30 years and I am very focused on the clients’ demands. I am working for them. I know what they need. In Portuguese, I say that they are the owners of the house. They live there, so they know perfectly what they need, to breathe, to live, to walk. So I know that in the first place I must answer their questions, but of course if they commission a designer to do something it’s because they feel they need someone to edit, fine-tune their project, and that is our role. My rational part comes from design, but the approach is always emotional. I try to understand who they are, what they want.

Do you think that itâ&#x20AC;&#x2122;s once you have accumulated all this experience and collaborated with so many people that you can afford yourself the luxury of having a much more emotional approach? When you are starting off you have to be more rational in response to client demands. Yes, I would agree. And after three decades, itâ&#x20AC;&#x2122;s also related to challenge. You need new challenges in life and in your work. And of course later you have more authority to have a more emotional approach. All these elements then work together. Once there is trust from the clientâ&#x20AC;&#x2122;s end, then you have more freedom to let your skills fulfil the emotional side of the equation. Through design we are given the chance to interpret real life and give answers.

You have to translate those emotions into something that is still modern and relevant, like in your wine bottle packaging which had poetry printed on the inside of the box. It effectively embraced a sleek and modern design while evoking something traditional like poetry. When talking about packaging, specifically in terms of wine, I would say the rational part touches basic things like working with cardboard, wood, and glass. All the other things like skin or labels become part of story telling and are thus pure emotion. In every project that we tackle we try to involve emotions and define a concept. If you think of concepts, every person has their own story. And in our work we try to visualize what people dream about. Of course there is a huge gap between what they visualize about the project and what we ultimately produce. And thatâ&#x20AC;&#x2122;s a function of design: to add value and to create a differentiation. Together we have to find a sort of lighthouse during the lifetime of the project that can guide us. And sometimes that can be quite difficult. But in the end you are inviting the client to be a part of the project and together answer the big questions.

In your project for Porto and the inspiration that came from the local tiles, you seemed to have a very democratic approach. That was our goal. We tried to first explain the city through its attitude. People in Porto have a strong character. They are conservative but very open. Then, we tried to create a second level of language that could be very democratic. We tried to design, through icons, all the different highlights of Porto, architectural, artistic, etc. Everything. So that everyone could be represented in the city. We allowed the neighbourhoods to be represented by having them give us the subject and us putting our language on it. This is important because letâ&#x20AC;&#x2122;s say if tomorrow Porto were to win the Champions League, I could design a Porto of stars. I could rebrand the name of the city with stars. In the Spring I could represent the city with flowers. I can thus shape the logo of Porto for each occasion. Thatâ&#x20AC;&#x2122;s what is democratic. We invited people to come and share their hopes and dreams with us and we, as designers, defined it.

How does a city come to search for a new visual identity? If you look at the political process that is behind our work, it comes down to the new city mayor who does not belong to any political party. He created this new wave that favoured interesting projects, because unlike candidates hailing from political parties he was not interested in advancing a political agenda other than that of the city. Ultimately he really cares about Porto. He was looking for something to communicate quickly with the population; and visuals tend to be stronger than words. Thatâ&#x20AC;&#x2122;s what it takes: smart people, new people, people who are not engaged in party politics, who have open minds and who allow you to design freely in an innocuous environment.

How does creating a visual identity for a city differ from creating one for a vineyard for example? It’s really the same process. The big difference is that in a company you can talk with the CEO, the CFO, the secretary, and the rest of the staff. You can look at the effect it has on general society. When you deal with a city, you have to listen to IT. And that can be a little more complicated but being citizens of that city helps.

Well in that case do you think it is important to be able to empathize with a project? Could another designer, who does not have the same love for Porto, have fulfilled the mission? I don’t know. Maybe. Maybe not. Because in the end we are talking about passion and passion cannot be explained. If you love someone, you can’t explain how it happened. The opposite is also true. So our process involved this passion for the city. But maybe someone else could have had a more rational approach and it would have also been a valid process. I could maybe perfectly design the identity of Melbourne, Australia. I don’t know.

Do you have a favourite project? After two or three decades of work you need more challenging things to do. So white editions is kind of my corner where I can do all the things that are close to my heart. Then there is my book, which is called Inside, Outside. The entire edition has 72,000 post-its glued by hand. I like to do crazy things. It took three years to do the entire project. I wrote, designed and produced the entire book. It’s a unique project.

It’s a labour of love. Yes, love is the correct word. If you put love in whatever you do it will touch people’s hearts. If you do easy things, people can see it. If you do something that is too common, everyone can repeat it. You need to put love in things, to create value and differentiation.

This catalogue is published for Eduardo Aires' lecture at ­Mudam Luxembourg on June 10, 2015, organized by Design Friends.

It is safe to say that what drives Eduardo Aires above all is passion and a dedication to his craft. The man who, to complete his PhD, spent seven years in a library analysing 150 years of newspaper front pages walks us through how he tackles his projects and in particular how he came to design the visual identity of his vibrant hometown of Porto.

Story Tiling: A Tale of City Branding White Studio, led by Eduardo Aires, is a multidisciplinary design studio, based in Porto and more rec...

Story Tiling: A Tale of City Branding White Studio, led by Eduardo Aires, is a multidisciplinary design studio, based in Porto and more rec...