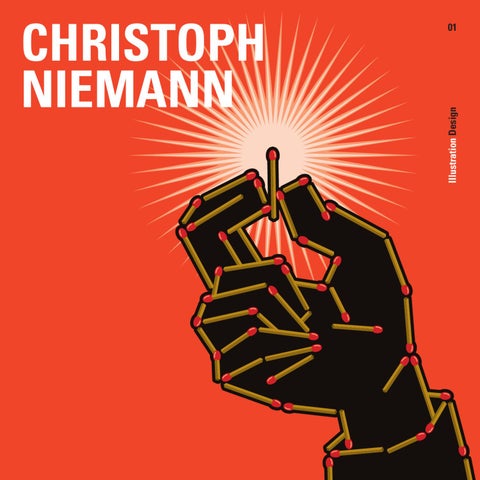 Could you resume the 5 most important steps of your career? I studied graphic design at the state academy of fine arts in Stuttgart/­ Germany from 1991 through 1997. In the summers of 1995 and 1996 I did internships in New York (with Paul Davis first and Paula Scher at ­Pentagram the following year). After my studies I moved to NY to work as a freelance illustrator, working mostly for editorial, but also advertising and publishing clients. Over the years I have worked on a number of book projects, most notably the book series 100%, that I have created with Nicholas Blechman. Since 2005 I’ve written and illustrated some books for children, The Police Cloud, The Boy With Two B ­ elly B ­ uttons (written by Stephen Dubner) and most recently The Pet Dragon. In 2008 I moved to Berlin with my family.

The result of your work takes ­various forms: sketches in coffee-ink on napkin, computer drawings, little Lego constructions, handmade drawings, drawings mixed with computer material etc. Could you explain the process, from the very first idea to the final result?  First I try to think of an idea. This happens by just staring at a white piece of paper, until some idea just appears. Once I have the idea, I try to think of an appropriate style to execute the idea. Some concepts require a very simple and clean, graphic execution, others need a softer, playful and personal style (like the coffee drawings). I think style is extremely important, and I try to constantly find new ways to communicate ideas, but for me the style always has to support the concept.

Do you work at home or outside? Do you spend a lot of time doing nothing else but feeling what’s in the air (listening to daily conversations in bars, on the corner shop, or in the playground with your children...) or do you work a lot behind your desk? I have found over the years that I function better if I leave the house in the morning, and more importantly, leave my desk a few miles away from my home after returning from work. I would be thrilled if I was able to come up with concepts while sitting in the corner cafe or overhearing conversations. Unfortunately this does not work. I can only function in my music-free, rather spartan studio, and the aforementioned white piece of paper. Some of your drawings are also related to reality (political, economics, ­religious conflicts...). How do you get your information (radio, TV, news­paper, web)? Is it a daily activity? Are you news-addicted?  I am TERRIBLY news-addicted. Especially in politically exciting times (the US election 08 for example), I had to force myself to focus on my actual work, since the temptation to just focus on all the new daily developments was so big. Since we’ve moved to Berlin, I read the paper less than before. The biggest reason for that is that I get to work by bike now. As much as I enjoy this, I realize how much reading I got done when I took the subway twice a day for 30 minutes when we lived in NY. Nowadays, I spend at least 2 hours a day reading various papers and news sites online.

You seem very influenced by art – I’m referring to your bathroom mosaïc decoration or the cover for The New Yorker reinterpreting antique Greek sludge for example. Is art a source of inspiration for you? What kind of art are you fond of? What kind of relationship do you have with art (do you often go to museums and art galleries or read art books)? As a child, I was drawn very much to representational art, but over the years I have become a bigger and bigger fan of abstract and conceptual art. Like most people who juggle between working and parenting, the time (and energy) to go to museums and galleries is sometimes hard to find. I have the incredible advantage that my wife is a very inspiring art historian/journalist, who to my utter delight constantly drags me to excellent exhibits and events. Who are your clients? Who do you dream to work with / for? Despite the move back to Europe, my clients are still mostly A ­ merican magazines and newspapers. Over the years, I have felt, though, that the field has become less and less geographically concentrated. It is certainly more and more of a global affair. In terms of a dream client, I don’t really have a list. I have found that a project for a great client can turn into a tenacious nightmare, where as the jobs that seem boring from the outside, often yield the most satisfying work.

Which three works are you most proud of?

What has the experience of ­working as an editorial illustrator taught you?

Ummmpfff... that’s a tricky one... I have to admit that I am only happy with my work, when the audience is happy with it too. So usually the works that get the best responses are the most gratifying. Apart from that I am pretty proud of – the series of economics drawings that I have been doing for The New Yorker for ten years now (there must be more than 300 now...) – the 100% book series – and a soapstone sculpture I made for my wife last winter: It’s not great art and was a terrible mess, but it was a good birthday surprise I think.

I am not sure that it has taught me anything of significance, at least not compared to what you can learn as a nurse, or a travelling salesman or a diplomat. I have learned to work pretty quick and not to be intimidated by ­pressure. What I love about my work is that it gives you a very entertaining insight into a very wide range of subjects.

In your previous illustrations, you make a lot of references to your daily life in New York City. Now, you live in Berlin. Is this city a new source of inspiration for you? Do you have new preoccupations, new subjects, or another opinion of America by seeing it from abroad? I think this will still take a bit more time. Berlin is an amazing place, and there is certainly a lot of inspiration everywhere I look, but unlike NY you don’t have as much of a chorus of common themes. The neighbourhoods are very different from each other socially and culturally. In NY most of the people I know go to work in Midtown, which somehow ties the whole city together. Berlin doesn’t have anything like that, hence it’s much harder to make a pun that sums up an aspect of life there; that everybody would get.

How was the experience of making books for children? It’s very gratifying to have s­ omething tangible as the result of my struggle. Editorial illustration lives for 10 minutes and then ends up in the recycling bin. Knowing that your book may sit on a kid’s bookshelf for months or even years is very gratifying. The biggest thing I have learned (or rather learned to struggle with) is to focus on a project that is much more complex than an illustration: it takes months, if not years to make a book, you fight with words and images at once. The result has to be a story and 10, 20 or 30 images that have to feel consistent and effortless during the 5 minutes it takes to read that kind of book. That is quite challenging.

How did the idea of making a book on learning Chinese for the young come to your mind? Was it a commission? I was on a trip in Japan, and some Chinese designers taught me and a friend some basics about Chinese characters. I was always intrigued by the graphic beauty of those characters, but totally intimidated by their complexity. After I have learned that they are based on a very visual and charming set of icons and visual metaphors, I felt like a five year old who for the first time got a glimpse into the secrets of the grownups. So I didn’t really have to boil down a subject to make it understandable for kids, but rather could make a kids’ book from the perspective of a child. It’s a very hard job being funny and making sense in drawings. How do you feel about this? Usually, I am pretty grumpy when I work (though I have learned to be reasonably polite when I am on the phone). The reason I use humour in work is that I think it is a terrific way to communicate stories, and a good way to get the reader’s attention. I think it’s very hard to be funny and NOT make sense. So I find it hard to be funny, and I find it hard to make sense, though the two are ultimately inseparable. Do you usually take many steps between the idea and the final result? This varies a lot. There are those few instances where it’s just a quick step. But even after years of practice, it still

very often takes a lot of agonizing trial and error to get to a satisfying result. What is your next big project? The blog for the New York Times that I have started last year is a great gig. But coming up with a whole new story every one or two months is a t­ errible challenge and as far as I can see, this will consume most of my creative energy for the coming months.

This catalogue is published for Christoph Niemannâ&#x20AC;&#x2122;s lecture at Mudam Luxembourg on April 29, 2009 organized by Design Friends.