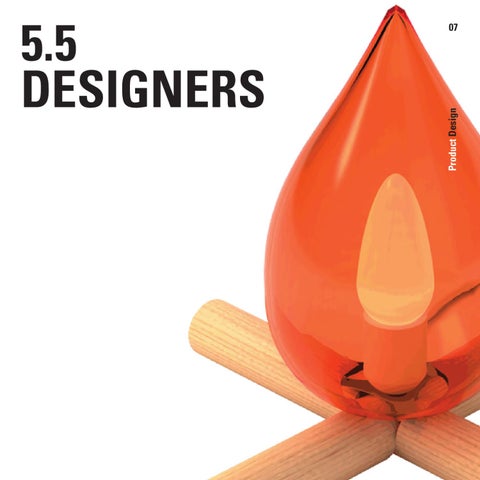 Seven years ago they were the enfants terribles of the French design industry. Now that they’ve worked with several well-known manufacturers, they’ve proven they are here to stay. Maybe more grown up, but still as innovative as always.

When and how was 5.5 designers established? In 2003 we (Jean-Sébastian Blanc, Claire Renard, Anthony Lebossé and Vincent Baranger) were in the same class at école Nationale Supérieure des Arts Appliqués et des Métiers d’Arts (ENSAAMA) in Paris. We liked working together and started doing that on a professional basis after we graduated. We were not experienced in the professional design field but that’s only a positive thing. We were not afraid to loose anything. We still learn and develop ourselves every day. We didn’t have a mortgage or children yet so we had no big responsibilities. This is why we had the opportunity to take risks. Besides that we are all very independent persons, so I think it’s more difficult to work for a boss than for our own company no matter how inexperienced we were in the beginning. Another benefit of starting so young is we are no copies of the designers we learned from. We are self made.

Where does the name come from? We only had one wish, we wanted a very generic name. Our first project together took two weeks time. The first week we were with six people, the second week with five. Five and a half is exactly between five and six, it’s as simple as that. Now that we use the name for quite some time we notice it’s very effective because we are always first in alphabetic lists. What is typically 5.5 designers? It’s hard to define a philosophy, but I think we are not traditional product designers, we don’t think in shapes, colours, materials and dollars. We want to tell a story. The concept is always more important for us than the end result. We try to make existing good products even better, and than with a twist. How would you describe the work of 5.5 designers? We feel the urgent need to express our ideas. We would become very unhappy if we are simply asked to design just a chair. We don’t want to design a new chair, we want to design a new way to sit. And think of a paper clip for example. It’s brilliant. One will never design or invent a new paperclip. But a new way to put paper together must be possible. We want to solve problems. There is no fear the source of ideas will be empty one day. The work we do never stops. Not only do we work 24/7, we also trust we’ll discover new inspiration every day, it’s everywhere.

There is no end for creation. And we don’t see the studio as work, it’s a passion, a way of life. What is your starting point when you design? We disturb and rebuild. For us the aim isn’t aesthetics – it’s the concept. And if you get the concept right, the end result will be aesthetic as well. Aesthetics concludes the concept. Because we use existing things, shapes, colours and materials are not at issue. We tackle the challenge of turning something good into something even better by making small but smart changes. It’s all about looking at things from a different perspective. A good example of this is the cooperation with Bernardaud. We spend days in their factory to give the traditional porcelain products a new dimension. Can you describe a process? After receiving the client’s brief, we discuss it in a meeting attended by the whole team. In the ensuing two weeks, each one of us develops a concept for the project in question. The next phase entails the collective creation of a book of ideas. This book we use for the client presentation. It’s only at this point that one of us is selected to implement the best idea. Every decision made during the entire process is a mutual made decision.

Do you have an explanation for your success? I think it’s all based on our naivety. When we started we didn’t think of the risks and we didn’t know where we were going. We just live day by day and accept a project or product if we think we have a solution for the challenge we face. We don’t have a style like for example Zaha Hadid or Matali Crasset. Every product of Zaha’s hand has the same kind of shape and everything Matali makes has rounded curves and bright colours like green, pink, turquoise and purple. Our philosophy is the similarity in our projects and products. How do you divide the work between all of you? We force ourselves to do everything together. We don’t want 5.5 designers to be a one man show. Of course everybody has his or her own qualities, but we want to keep the roles vague. In the beginning we had troubles finding our own place in the team, but now we accepted our personal shortcomings and function like an oiled machine. It’s not more difficult than working alone. Perhaps it’s even easier. I think our synergy makes our work richer. Working together so closely makes us getting to know ourselves better and better. We now know our own good and bad sides. We do feel people’s curiosity about a split up, though. They think this cooperation can not last forever so they keep an eye on us. But here we are, seven years later and still enjoying working together.

How do you get in contact with your clients? The funny thing is: we don’t do anything! Every time we finish a project or a product we get free publicity and after that new companies call us because they want to work with us. We realise we are in a very luxurious position and we are still surprised we don’t have to contact manufacturers or editors ourselves. The only reason for this must be that people recognise our philosophy and find it interesting. They always contact us because they like our previous projects, not because they have a strict briefing for us. We get a lot of freedom. We’ve worked with Baccarat (glassware), Häagen-Dazs (ice cream), Scotch Brite (sponges), Murano (glass objects), Roland Garros, Bernardaud (porcelain), Skitsch (lamp), LaCie (electronic products) and Urban Outfitters (retail fixtures). What are your most recent projects? For Christmas 2010, we designed ice cream for Häagen-Dazs. We wanted to explore ice in its most pure state, or at least the way it exists in nature so we created an iceberg like a block of ice just brought back from the Antarctic. We also designed some retail fixtures and furniture for the new Urban Outfitters shop in New York. The concept was finally used in three other shops. For this project we continued to work on the idea of ‘semifinished products’ that must be completed by the user. And as from January 2011

people are able to find a range of accessible electric kitchen tools (a stick mixer, a mixer, a toaster, a juicer, a kettle etc.) in supermarkets coming from our collaboration with Moulinex. And we also presented in preview the collection of accessories that we designed for Nespresso. This collection is composed by a cup, a stirrer, a tray and a capsule dispensers. These Nespresso products will be launched in parallel of the new Nespresso machine. As you can see, we are still very interested in the ‘cuisine’ world and like to come up with smart solutions for it. Is there still a goal you want to reach?

One of our leitmotives is to give more signification to the way we consume. So it’s a permanent task we give ourselves and a new challenge for each new collaboration. The designer task is a long term work with the industry, brands media and consumers. We continue to prove ourselves to gain the confidence of the industry and brands and be able to create interesting products. Even if we never speak so much about design in the media, the industrial society continues to produce so many bad, cheap products and the percentage of products really well thought through is very little. Most designers often limit their collaboration to few brands and producers that are used to work with designers because it’s easier to be completely radical and coherent with this kind of client. A lot of designer philosophies are contradictory because a lot of them would like to work for the mass market and at

the same time they have some difficulties to accept to be less creative or rather less original in order to design for the mass market. It’s sometimes more dangerous for a designer to work with the mass market because you must deal with a lot of restrictions and accept to bring the good quantity of innovation that can be accepted by the mass consumer. One of our goals is still to face the mass production world and understand it better. Which prizes did you win so far and for what exactly? During the last two years we won several industrial design prizes for the usb sticks that we designed for LaCie (Red dot design award, IF award, étoile du design at l’Observeur du design 2009 and 2010). It’s good gratitude for our industrial work. We are proud of these products because the idea is very simple and obvious, a little bit stupid but very functional and universal. LaCie has already produced more that one million of these products. On the other hand, the FNAC (French National Contemporary Art Collection) and the Centre Pompidou purchased some of our projects as the Cloning Collection, Save a product, Réanim and these LaCie USB sticks. We are happy to be recognised by the two worlds of art and industry because it’s one of the goals of the studio to design some products that will be appreciated by the ‘common people’ and the ‘art amateur’.

What is your talk in Luxembourg about? Actually, the studio works a lot for the industry and continues to work on experimental projects. The talk is more about this experimental side of 5.5’s work, about how we question the role of the designer in our industry. It starts from the classic method that we learned at school where the designer is ‘used’ to answer to a brief and give a shape to the wish of a marketing team. Then we continue to question this process and show how the designer can also find solutions to problems that can happen later in a life of product, during its production, its commercialisation, communication or its end of life. Somehow, we’ll show how in the last few years we built a kind of tool box to answer to different needs and problems that we can have in the production of objects. And of course this 5.5 tool box continues to evolve and is work in progress.

This catalogue is published for 5.5 Designersâ&#x20AC;&#x2122; lecture at Mudam Luxembourg on February 2, 2011 organized by Design Friends.