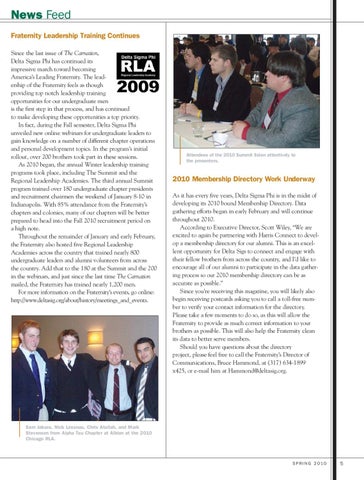 News Feed Fraternity Leadership Training Continues Since the last issue of The Carnation, Delta Sigma Phi has continued its impressive march toward becoming America’s Leading Fraternity. The leadership of the Fraternity feels as though providing top notch leadership training opportunities for our undergraduate men is the first step in that process, and has continued to make developing these opportunities a top priority. In fact, during the Fall semester, Delta Sigma Phi unveiled new online webinars for undergraduate leaders to gain knowledge on a number of different chapter operations and personal development topics. In the program’s initial rollout, over 200 brothers took part in these sessions. As 2010 began, the annual Winter leadership training programs took place, including The Summit and the Regional Leadership Academies. The third annual Summit program trained over 180 undergraduate chapter presidents and recruitment chairmen the weekend of January 8-10 in Indianapolis. With 85% attendance from the Fraternity’s chapters and colonies, many of our chapters will be better prepared to head into the Fall 2010 recruitment period on a high note. Throughout the remainder of January and early February, the Fraternity also hosted five Regional Leadership Academies across the country that trained nearly 800 undergraduate leaders and alumni volunteers from across the country. Add that to the 180 at the Summit and the 200 in the webinars, and just since the last time The Carnation mailed, the Fraternity has trained nearly 1,200 men. For more information on the Fraternity’s events, go online: http://www.deltasig.org/about/history/meetings_and_events.

Attendees of the 2010 Summit listen attentively to the presenters.

2010 Membership Directory Work Underway As it has every five years, Delta Sigma Phi is in the midst of developing its 2010 bound Membership Directory. Data gathering efforts began in early February and will continue throughout 2010. According to Executive Director, Scott Wiley, “We are excited to again be partnering with Harris Connect to develop a membership directory for our alumni. This is an excellent opportunity for Delta Sigs to connect and engage with their fellow brothers from across the country, and I’d like to encourage all of our alumni to participate in the data gathering process so our 2010 membership directory can be as accurate as possible.” Since you’re receiving this magazine, you will likely also begin receiving postcards asking you to call a toll-free number to verify your contact information for the directory. Please take a few moments to do so, as this will allow the Fraternity to provide as much correct information to your brothers as possible. This will also help the Fraternity clean its data to better serve members. Should you have questions about the directory project, please feel free to call the Fraternity’s Director of Communications, Bruce Hammond, at (317) 634-1899 x425, or e-mail him at Hammond@deltasig.org. 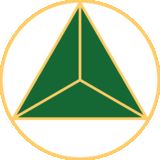 The Spring 2010 issue of The Carnation magazine includes alumni profiles, a Feature on Delta Sigs in the Visual Arts, and a number of storie...

The Spring 2010 issue of The Carnation magazine includes alumni profiles, a Feature on Delta Sigs in the Visual Arts, and a number of storie...