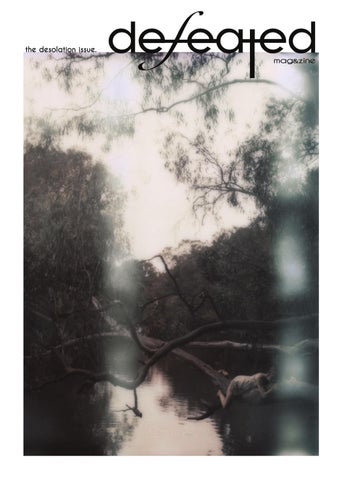 place to be born, grow or die, to let your soul be known or hide it, a place to be yourself or your other self.

(in order of appearance)

efeated Mag&amp;zine is a one-theme issue for young photography. We want the artists to express themselves, not only showing what they do but also the story within the photograph. The issue searchs for the poetry behind the shot. By proposing a topic we encourage the artists to relate their work to a subject supported by few words of their own. Together alone...

The memory of something we’ve lost can let us ﬂoating in the middle of nowhere, an empty space of silence and peace we fear. The unforgettable ﬁrst love that leads to the desperate lonesome. A retreat into oneself, the best company. 20 young photographers sinking into desolation.

“ Desolation seems best expressed in shades of grey and black.

Just as colour represents joy and hope, black and grey are synonymous with misery and despair. I’ve sought forlorn, isolated ﬁgures at night and photographed them with a slow shutter speed. These blurred, anonymous ﬁgures become less speciﬁc and more universal – so that the lonely ﬁgure depicted could actually be the viewer. I want my images to bypass logic and trouble the subconscious. Alison McCauley Geneva

the abandonment, the oblivion in the middle of desolated landscapes and the quest for peace and silence in all its forms... Sophie Fontaine Nancy (previous two pages and right)

â&amp;#x20AC;&amp;#x153;Luarca and many other Asturian villages are marked by a feeling of nostalgia. I wanted to channel the cold silence of Luarca in the winter, and the sense of loneliness and melancholy that emanates from its streets and buildings. The village is empty and you basically stay in all day due to the weather conditions...

“Whites and soft colors, empty spaces and the light as basically all its decoration. I wanted the pictures to show how moving to a new country, with a diﬀerent language and traditions feels to me. ...starting from scratch, from that moment when you still miss your home until you make the new one yours...

“Solitude is a bliss... Alexander Alekseenko Kiev (next two pages)

“I have always been attracted to seemingly endless, barren ﬁelds.

Being in the middle of an empty ﬁeld allows for an escape from the hectic pace of life and racing thoughts, a time to pause. It can also allow a retreat into oneself. When it comes to photography, there is something about how small a person looks compared to the vast open piece of land against the sky. The person, or bird, may seem alone in this empty space yet paradoxically they may also seem connected to something greater than themselves. Roslyn Julia New York

Who are you? Douglas E Pope.

Where do you come from? Where are you now? Where are you going? London born, been in Melbourne for about 4 years now- where I’m going is something I like to leave open ended, my plans change frequently.

Which cameras you shoot with? Primarily a Polaroid SX-70 and an Exa1b- but also a Polaroid 450, a Pentacon Six, a Voigtlander Bessa R3M, the odd party cam and an assortment of old m42 lenses.

What is behind your images? Intimacy. Honesty. Lonesomeness.

What else would you do if you couldn’t take photographs? I’m a bit of a one trick pony, so I’d probably have to consider a life of petty crime to get my kicks.

Why photography? I ﬁnd it far more instantly gratifying than any other medium. Films take too long to make and involve too many people, I’m too shy about my writing, and I can’t draw for shit… but I want to tell stories and evoke emotion in people.

Do you see the picture before or after looking through the lens? Before I guess, but only just- I’m always wary of trying to set up shots too much. I like to run with the events before me. I’m a reactive photographer.

What color are you? A cold blue maybe? Like an iceberg.

Something you shoud have said to someone but you never did? “It’s not goodbye, chunky rice.”

An image that moves/inspires you. I own a print by a guy called Toshihiro Oshima, but I can’t ﬁnd a version of it online to share (which I kinda like).

A song, a movie, a book A Song: Wolves by Phosphorescent A Movie: Badboy Bubby A Book: Consider Phlebas, by Ian M. Banks.

Have you ever been defeated? What happened? Sure, frequently, byThe Impossible Project ﬁlm- which can be a bit temperamental at best.They’re doing a great job regardless. I usually sulk my socks oﬀ for a spell, then get up and have another crack at whatever I was doing. I’m pretty persistent and it usually works out in the end.

How do you relate your photographs to our issue topic? new with a model I’d never worked with, “The Polaroid sets were an attempt toontryﬁlmsomething I’d never shot. I’m so used to shooting with one girl (a muse of sorts) that, despite having known Marta for years, creating a sense of intimacy was a challenge. I processed the set to feel murky, lost and alone. I think that comes through and I’m really pleased with the new impossible stock. The black and white set is far more personal, a collection of images taken on the ﬂy with an ex over a few months towards the end of a relationship either of us particularly wanted to end. I’ve tried to inject a vague narrative- keep the honest simplicity in each of them; the girl holds so much innocence in her eyes.

â&amp;#x20AC;&amp;#x153;I am interested in memory, doubt, life and death. When I photograph I always try to capture what escapes us, through time, our route, unravel the secret that is in sight but necessarily eludes us.

Seeing was always in the details, a possible preview of the crossroads that will arise, paths seen and revised but normally forgotten, formations that become denser again, possible desolations. Will they ever turn into a storm or simply serve as a vortex for other utopias?

“Autumn breath swirling in the air

and through my entire bones dwelling in absentia and nostalgia all wrapped up in thick and warming blankets ﬂickering shades of candles so bright to safe me from frostbite and keep me in delight bound to bed and home though nobody of us wants to stay alone i’m freezing and shaking not only from the outside but from the inside loving cuddles for hours this is what i wish and this lack of it keeps me in coldness and melancholia waiting for someone to melt the ice again.

I think about documenting forgotten objects, abandoned places, photos taken whilst alone behind windows looking at cityscapes. I am interested in exploring landscapes seemingly devoid of humanity but with a sense of past human presence. As a photographer I can some times feel isolated in the way I view the world, behind the camera, observing rather than participating, but that is the way I prefer it. Dania Shihab Barcelona (both)

“Sometimes we can ﬁnd desolate places in the biggest metropolises. Surrounded by millions of people, mostly of them ignore or even do not recognize them. I do because they possess their own distinct beauty.

“It’s there for too long,

or for just a minor moment in time - unnoticed, and quite meaningless, unless you like it otherwise. Ulrike Biets Brussels

is something I can deﬁnitely relate to. I always do things on my own. Travel on my own, go to places on my own, eat on my own. It&#39;s something so natural, that I don&#39;t know how to behave when I&#39;m with people. Stephanie Jesus Rio de Janeiro (next page)

â&amp;#x20AC;&amp;#x153;Summer Nostalgia: This is a walk in the middle of October around a ghost seaside town, now deserted, empty, desolate, closed. What remains are only hotels, empty swimming pools and the memory of a summer just passed. With a sense of melancholy and nostalgia. It is incredible to think about how, just a few months ago, these places were completely diďŹ&amp;#x20AC;erent.

invade the spaces, “We we make them ours, we conquer them.

In this project I would like to reﬂect the feeling and emotions of the space we left behind. We leave scars, we forget the place, but the place does not forget us. There is a story behind of every wall, every object, every mark.

no concentration. at all. please remember that i just walked pointlessly. the rain was easing oﬀ... the smile more radiant than Buddha&#39;s. well, you can kiss me now, if you like. If you like... awkward way. i&#39;s&#39;pose. party in inverted comas. whatdyacallit... it&#39;s as if somebody died but no one really knows who. havin&#39; a silent misunderstanding about sex. how&#39;s your head anyway? where&#39;s my head at... lovely distracting stories we tell each other. everything does.. i don&#39;t think she knows what he&#39;s doing i don&#39;t think he knows what she&#39;s doing. but they both know too much. come on, come on... you so full of questions... nothing else you wanna know?

Thank you To the artists: for being part of this project and for submitting your work, Family &amp; Friends: for the support and trust. Design, production &amp; art: Jael Levi

Defeated Mag&zine is a one-theme issue for young photography. We want the artists to express themselves, not only showing what they do but also the story within the photograph. The issue searchs for the poetry behind the shot. By proposing a topic we encourage the artists to relate their work to a subject supported by few words of their own. Together alone: The memory of something we’ve lost can let us floating in the middle ofnowhere, an empty space of silence and peace we fear. The unforgettablefirst love that leads to the desperate lonesome. A retreat into oneself, thebest company.20 young photographers sinking into desolation.Founder: Jael Levi // www.jaellevi.com © 2012 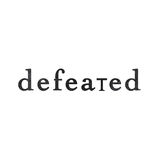