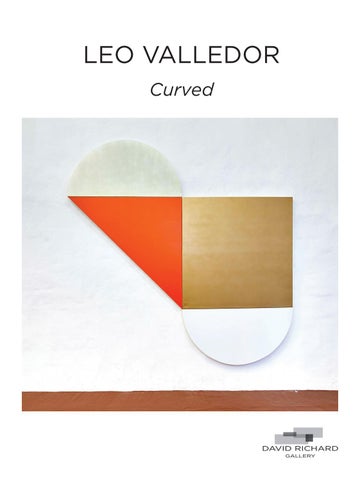 Between Heaven and Earth

The Shapes and Components of Leo Valledor By David Eichholtz 4

The current exhibition, “Curved”, surveys Leo Valledor’s career-long interest in curvilinear and circular shapes as well as multi-component canvases. The artworks span from the 1950s through the 60s, 70s and 80s. Aesthetically, the presentation includes Valledor’s early expressionist abstract paintings and signature reductive and minimalist compositions with an emphasis on his later hard edge and color-based abstractions from the 1970s and 80s that included illusory and optical constructs exploring space and creating a tension between the two-dimensional and three-dimensional worlds. The influences and relationships while studying at the California School of Fine Arts and living in San Francisco in the 1950s as part of the Beat scene impacted Valledor’s artwork throughout his career. The interplay of jazz music, poetry and painting fed his soul and provided the necessary freedom to develop his own visual language, while rhythm and beat were constant, grounding him and inspiring many of his paintings. His transition to reductive palettes and approaches in the late 1950s followed by the move to New York allowed an exploration of space and color in his dynamic and unique compositions and constructions. Valledor once said in the early 1960s, “I see color as space”. At that time, his sphere of influences included other members of the Park Place Group who shared an interest in exploring space through color and new visual approaches. Buckminster Fuller and vector geometry became an important part of that dynamic mix. Looking back at his transition and artworks from that same time, Valledor said in a statement in 1981, “My main interest was color and a switch to acrylic polymer. Abstract Expressionism became Hard Edge.”

Valledor was known for his hard edge painting and interest in color and geometry. However, the curvilinear shapes and circles were also an important part of his visual vocabulary and interest in space. They are less confining shapes and push the limits of his compositions, bringing a plasticity to his work and a metaphor for unbounded space. The less ridged and fixed shapes allow the viewer’s eye to move around freely and flow outside of the fixed confines of a conventional picture plane. Curvilinear and circular shapes became another one of Valledor’s many tools in his kit of economical means, along with color and shaped canvases, for exploring an expansive topic such as space and cueing viewers to look beyond the literalness of his compositions and see another world beyond. Valledor’s paintings are as dynamic and fresh as the day they were painted and the viewer is still encouraged to challenge visual perception and use their imagination to explore his canvases.

Leo Valledor (1935-1989), a Filipino American artist who grew up in the Fillmore district of San Francisco, studied Abstract Expressionism at the California School of Fine Arts (currently, San Francisco Art Institute) and was part of the “Beat” scene—the cross cultural and dynamic fusion of visual art, jazz music and poetry. He exhibited his artwork at the 6 Gallery in San Francisco from 1954 to 1957 alongside Jay de Feo, Manuel Neri and Peter Forakis, among others. His first exhibition was the same year and location of Alan Ginsberg’s first public reading of his poem, Howl. The late 1950s marked a dramatic shift in Valledor’s art to a reductive palette and simple geometric shapes. In 1961 he moved to New York and in 1962 was a founding member of the Park Place Group, an artist collective and exhibition venue for experimental art in Lower Manhattan. The founding members, many also transplants from the West Coast, were comprised of five painters: Dean Fleming, Tamara Melcher, David Novros, Edwin Ruda, Leo Valledor and five sculptors: Mark de Suvero, Peter Forakis, Robert Grosvenor, Anthony Magar and Forrest Myers. The gallery director was Paula Cooper. The group formed to explore their mutual interest in literal and illusory space, music and social concerns. In New York, Valledor’s new minimalist tendencies were appreciated by and exhibited with Sol Le Witt, Robert Smithson, Ed Ruda, Mark di Suvero, Peter Forakis and Tamara Melcher, among others. In 1968, Valledor returned to San Francisco where he continued to explore his unique abstract painting that extended musical harmonies and rhythms to shaped canvases and colors.

Installation view: Leo Valledor’s Juxtipo, The Impossible Dream, Shapin’ Up, and Eros Is Eros Is Eros

Installation view: Leo Valledor’s The Impossible Dream, Shapin’ Up, Eros Is Eros Is Eros, and Together