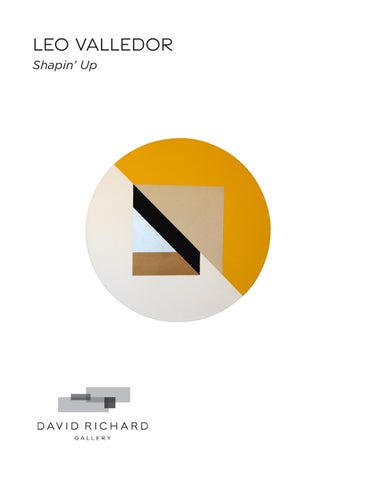 LEO VALLEDOR: JAZZ GEOMETRY By Peter Frank Along with those of many of his peers, Leo Valledor’s role in the development of postwar American art is being re-evaluated – re-discovered, actually, as befits the legacy of someone who died before his time but left behind a body of work whose latest examples are as engaging, and in many ways as challenging, as its earlier. In art-historical terms Valledor figured most crucially at a period when his working method was arguably at its most formulaic. This befits an artist associated, however peripherally, with minimal art; but, as with his peers, Valledor’s contribution to minimalism served not only to establish but to complicate the movement. His, like theirs, was a minimalism resistant to rather than driven by system, and his trajectory beyond the minimalist moment yielded many surprising and delightful works. What we take away from Valledor’s overarching oeuvre, and certainly from his later painting such as those collected here, is a sense not of dogged research, much less any mistrust of visual effect, but, to the contrary, a delight in optical pleasure and, even more, improvisatory wit and speculation. In his best known work, the painting from the mid-1960s associated with the Park Place Gallery group, Valledor reduced his compositions to uniplanar areas divided by diagonals that constitute zigzag patterns. But, rather than reiterate this structure endlessly, Valledor used it as an armature for coloristic variation and even for sometimes extreme shapes taken by his canvases. Once he left New York and returned to his native San Francisco, Valledor abandoned the pretend-rigor of this format, first, in the 1970s, for a more fundamental (and mystical) reductivism dependent on the transcendent effects of color, and finally for an open approach to geometric composition – a more spontaneous-seeming articulation of color areas posed against one another in dynamic choreographies. (Claudine Humblet provides an in-depth discussion of Valledor’s work of the ‘70s – and, indeed, his entire oeuvre – in her New American Abstraction 1950-1970. There she notes, importantly, that “[i]t is through the singular nature of his work on color as well as the invention of a structural language, as though magnetized by feeling, that Valledor’s shaped canvases are distinguished from those of the East Coast artists.”) In one sense, Valledor’s last work, realized in the 1980s, recapitulates and expands upon the relational aesthetics, as it were, of constructivism and other prewar manifestations of cubism-induced non-objectivity. In another sense, it goes back to the proto-minimalist impulses he responded and contributed to in New York in the early-to-mid ‘60s. Hard-edge abstraction, as exemplified (in New York, at least) by the work of Ellsworth Kelly, Leon Polk Smith, Al Held, and others, was positing itself as the most logical and viable alternative and successor to abstract expressionism (especially in the dawning “era of acrylics”). Other painters – shaped-canvas artists such as Charles Hinman, Sven Lukin, and Neil Williams, not to mention Frank Stella – were expanding on hard-edge thinking by engaging the shape of their supports as well as their painted forms in compositional rendition. In his Park Place days, oscillating between hard-edge/shaped-canvas thinking and the early-minimalist reasoning of Donald Judd and Dan Flavin, Valledor severely restrained his formal language even as he prompted his canvases to sometimes-startling attenuation. Once back in the Bay Area, however, he allowed himself to develop toward a fully hard-edge/ shaped-canvas approach, one far less constrained by the intellectual proprieties of mid-‘60s New York and more permissive of from-the-guts response – on the part of painter and viewer alike. Many posthumous commentators on Valledor and his work, not least those who knew him personally, mention his love of music, especially jazz, as a key factor in his aesthetic. Noting that he grew up in the Fillmore District of San Francisco when that neighborhood was dotted with jazz cafes, Lawrence Rinder writes that, with regard to his return to relational geometry, “Where Leo’s art gets hard for some is right where it ought to get easy. Abandoning the gestural language of abstract expressionism (which would linger on in the Bay Area for decades), he started to explore reduced palettes, geometric shapes, and the spatial dimension of color. This wasn’t the end of his dive into jazz-like spirit, it was the beginning.” Having begun himself as an abstract expressionist – and having enjoyed professional recognition as early as age 19 – Valledor had always found validation for grounding his visual impulses in music, particularly jazz. Where the improvisational nature of bebop and other

advanced jazz idioms suited itself to abstract expressionist practice, it might seem inimical to the careful mappings and emphatically un-gestural techniques of geometric (that is, hard-edge) painting. But as Rinder notes, “Geometry was his style and color was his tone.” Rinder argues here that Valledor’s approach sought less to mirror the ethos of jazz performance than it did the “feel” of the 4

music itself. In the work of his final San Francisco period, Valledor clearly achieved a visual manifestation of the sensation, rather than the method, of jazz. Ironically, of course, in its basic subjectivity such reinterpretation of musical sound into visual form invests more heavily in spontaneous response (again, on the part of artist and viewer alike) than does any abstract expressionist emulation of improvisational methods associated with “cool” jazz. Valledor’s paintings don’t seek to look jazzy; they seek a musical feel. And do they ever feel musical. Their shapes – that is, both the shapes inscribed on the canvases and those described by the contours of the canvases themselves – abut and overlap one another with a poised insouciance. Even the most balanced and centered compositions seem not locked into place, but ready to move into the next possible position. The sprightly, often unlikely, but always appealing colors underscore this potential for continual change. There is an overall sense of unpredictability and witty diversion balanced with a natural, unforced grace. Each painting reads like a jam session, as if between musicians and/or dancers, its vividly hued forms moving into place vis-à-vis one another with no guarantee they’re going to stay like that. Leo Valledor was a figure of significance in postwar American painting for any number of reasons, from his central role in the Park Place group to his relative success as an artist of color – especially one from an ethnic group all but invisible, at least at the time, in American civil society. (The role played by Pilipino-Americans such as Alfonso Ossorio, Mario Yrisarry, and Valledor’s cousin Carlos Villa in late-modern American art itself stands ripe for investigation.) But, as Claudine Humblet has recognized, it is the breadth and consistency of Valledor’s vision and production that most readies him for full reconsideration. He looked good back when; he feels right now. New York August 2012

Leo Valedor Leo Valledor grew up in the Fillmore district of San Francisco, studied abstract expressionism at the California School of Fine Arts (currently, San Francisco Art Institute) and was part of the “Beat” scene—the cross cultural and dynamic fusion of visual art, jazz music and poetry. He exhibited his artwork at the 6 Gallery at the age of 19, the same year and location of Alan Ginsberg’s first public reading of his poem, Howl. This period also marked a dramatic shift in Valledor’s art to a reductive palette and simple geometric shapes. In 1961 he moved to New York and was an early member and founder of the now famous Park Place Group, where his new minimalist tendencies were appreciated by and exhibited with Sol Le Witt, Robert Smithson, Ed Ruda, Mark di Suvero, Peter Forakis and Tamara Melcher, among others. In 1968, Valledor returned to San Francisco where he continued to explore his unique abstract painting that extended musical harmonies and rhythms to shaped canvases and colors. Many of his paintings also produced optical effects as they played with the tension between the two and three-dimensional planes. Leo Valledor had over 22 solo and two person exhibitions in important galleries and museums on both coasts, including Park Place Gallery and Graham Gallery in NY and 6 Gallery, Modernism, Dilexi Gallery and Daniel Weinberg Gallery in San Francisco, as well as the M.H. de Young Memorial Museum and San Francisco Museum of Modern Art. Valledor’s artwork is included in many important public and private collections, including San Francisco Museum of Modern Art (SFMoMA), De Young Memorial Museum in San Francisco, Seattle Art Museum, Oakland Museum, Crocker Art Museum in Sacramento, National Gallery of Art in Washington, D.C., Philadelphia Museum of Art, and St. Louis Museum of Art among others.

David Richard Gallery is pleased to present Shapin’ Up, a painting survey and the gallery’s first solo exhibition for Leo Valledor (1936-198...

David Richard Gallery is pleased to present Shapin’ Up, a painting survey and the gallery’s first solo exhibition for Leo Valledor (1936-198...