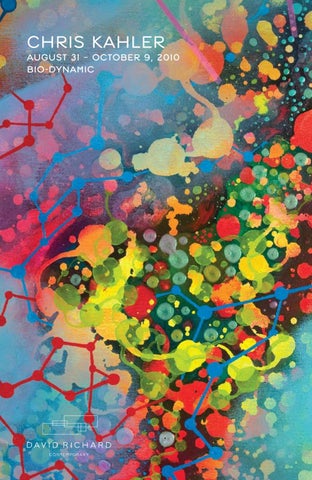 Back in 1952, the art critic Harold Rosenberg

to turn away from painting, many going so

far as to declare it dead and many more

a sea change that was taking place in Ameri-

can art. In his eyes, the most exciting works

mance, video, photography, and all manner

being made were not polished products

of hybrids that eventually gave rise to the

executed by artists according to carefully laid

out plans, after all the kinks had been ironed

ing, particularly abstraction, was left out of

out in preparatory sketches and preliminary

studies. On the contrary, they were wildly

because the objects its actions produced

improvised extravaganzas in which anything

seemed to get in the way of free-wheeling

could happen, the less expected the better.

activity: too many viewers felt that that

This is how Rosenberg, in “The American

Action Painting had become nothing but

Action Painters” put it: “At a certain moment

to act—rather than as a space in which to

issues to mind because they play fast and

an object, actual or imagined. What was to

sition between action and apocalypse, as well

go on the canvas was not a picture but an

as between painting and wallpaper, which

event.” The action—of making the painting—

have been in the background of discussions

is what mattered. The result of that activity—

about art for more than a half-century. Born

dried paint on canvas—was only worthy of a

in 1969, Kahler belongs to a generation of

viewer’s attention if it captured the urgency

artists for whom abstract painting was not

and uncertainty with which it was done, con-

intrinsically off-limits, the kiss-of-death for

veying, to viewers, the anxiety, engagement,

artists who wanted to be taken seriously by

and release that accompanied the struggle in

a critical establishment committed to avant-

the studio to do something that was not fake

garde experimentation and opposed to any-

or false, but authentic and real. “Apocalyptic

Wallpaper” was Rosenberg’s term for Action

unadventuresome. Kahler stands out among

Painting gone bad: for works in which nothing

this generation of rebellious, try-anything-

was discovered because the artist was stuck

once painters because his works make their

in a rut, churning out formulaic renditions of

way out of the impasse between authentic

his signature style as if the only goal were to

action in the studio and finished painting on

cover the walls with tasteful products.

the gallery wall, which drove many artists and viewers away from painting in the 1960s,

One of the oddest things about Rosenberg’s

articulate defense of abstraction was that

ing the emphasis away from the artist, his

it marked the moment when artists began

and toward the viewer: his past, present, and

events that have not yet transpired and will

point of view, as well as beliefs, dreams, and

not take place without the active participation

desires; anxieties, conflicts, and concerns. At

of a viewer, constantly responding to these

the same time that Kahler paints himself out

of the picture to make room for viewers—and

pants decisions based in intuition, hunches,

cated to potential and possibility than past

that is up close and personal and requires

sively open-ended canvases and panels as

viewers to reveal as much about themselves

Time-Release Action Paintings. Rather than

as the works before us. They are apocalyptic

taking viewers back to a series of self-defin-

in the sense that if you fail to lose yourself in

ing discoveries made in the studio, his pains-

them—only to find yourself somewhere else:

viewers re-make them in the moment, each

on a valuable opportunity for growth, devel-

and every time that any one of us lays eyes

opment, and discovery, at a deep, existential

on them. Kahler’s uncanny abstractions are

particularly difficult to remember, much less

by which artists could fail (or succeed) in

describe. Their superabundance of detail,

their works, Kahler does the same for view-

ers, transferring what is at stake in the studio

to the ongoing present that his invigorating

whiplash shifts in scale, and electrifying

art inhabits. The act of viewing his paintings

is essentially creative, with all the risks and

colors insure that the more one looks, the

more one sees, and, moreover, that the path

ings are far less egocentric than those that

and the pace of one’s trip through any one

of Kahler’s works is never the same twice.

They are also more social, contextual, and

Surprise and discovery are built into his jam-

flexible, not to mention unpredictable, open-

which aim for amazement and deliver its spine-tingling, mind-blowing pleasures with

For centuries, artists have sought to stop

time, to make works so powerful, momentous, and all-consuming that they seem

to occupy their own reality—a world unto

tions as Apocalyptic Wallpaper In The Pres-

themselves, next to which reality pales in

ent Tense. His swirling maelstroms of oil and

acrylic are not the lifeless byproducts or evi-

His art is engineered on the principle of fold-

dentiary records of events that have already

ing time back on itself, of overlaying vari-

happened in the studio and are, for all intents

ous moments not so that the past and the

and purpose, over and done with. Instead,

present collapse into an impossibly fulfilling

crescendo that dazzles and dominates, but

so that the moment in which they are seen

others obliterates them completely, or trans-

expands to include an inconceivable number

forms them significantly, not really starting

of moments that preceded it and even more

fresh, but starting over, with all the emo-

this out. Kahler’s paintings are multilayered

His works do not stop time or freeze it in

constellations that allow viewers to catch

ered over by opaque and semi-translucent

to various “befores” and “afters,” increasing

coats of paint. By dripping, splashing, and

the mystery by acknowledging and cultivat-

pouring brush-loads and buckets of acrylic

and oil atop one another in a single painting, Kahler sometimes builds upon previous

layers that have dried or are still wet, and at

moves is all about making paintings that

get viewers to experience them as paintings

the tenor of the trip. Others embody a potent

and corrosive beauty, a sublime combination

and on, and on. Another way to put it is that

of breakdown and growth, disintegration

his art allows us to experience singularities

and accumulation, creation and destruction.

positions and autonomous wholes into open-

birth of techno-bacteria. This gives you an

ended journeys with no ends in sight. Some

idea of the uncategorizable mutations that

of his works are hallucinatory, while avoid-

ing the narrative sentimentality typical of

mongrels. Sometimes it seems as if he paints

standard Surrealism. Imagine what the world

pictures of a world of effervescence, in which

would look like if the Ben-Day dots of Pop Art

were on acid, everything melting and mutat-

ing, gorgeous and terrifying, depending on

uid clouds. In his work, it is almost impossible

to distinguish between the microscopic and

applies one or more layers of paint, pouring,

the cosmic, and everything is richer for the

dripping, and blending freely. When he tears

confusion. Many of Kahler’s paintings appear

off the masking material, a previously buried

to give shape to digital ruins or to electronic

layer of the painting is once again visible.

impulses that have eroded, their crisp clarity

The past, which had vanished, comes back.

fogged over and their streamlined swiftness

Kahler repeats this step many times in a

rities. As an artist, Kahler makes a virtue of

and space. The colors he uses add to the un-

glitches in the ordinarily seamless transmis-

certainty about which part preceded which:

key wrench into the machinery that makes

cede, no matter which step in the sequence

they belong to. This further complicates the

temporal relationship between and among

better, especially in the paintings that appear

the mix. This makes Kahler a stranger in his

to be solar systems overcrowded with plan-

own painting, which allows him to get out of

ets, their orbits impossible because of inter-

his comfort zone, to steer clear of facility and

Wallpaper. Constantly responding to an

ongoing accumulation of marks, drips, and

dent paintings, they do not diminish accord-

ing to the logic of infinite regression. Instead,

his complex orchestrations of color, shape,

that open onto endless possibilities.

and texture maintain focus, clarity, and crispness, their vivid components colliding and

Viewing his paintings takes time. It is an

colluding with one another as they create jar-

activity that cannot be done quickly. All of

Kahler’s works have the dazzling, knock-

compositional rhythms. The centrifugal and

to compete with everything out there, will-

generate mental conundrums that enliven the

ing and able to hold their own in the image

mind as a viewer strives to put together the

glut of modern life, whose capacity for swal-

lowing up subtlety, nuance, and delicacy is

amid the compelling chaos, an improvised

well known and relentlessness. This is where

Kahler’s art works its magic, bringing the deliciousness of details, the subtlety of sensual-

The secret ingredient that allows Kahler to

ity, the mysteriousness of the unknown, and

shift his paintings into high gear, so that they

the beauty of ordinarily overlooked incidents

seem to move at warp speed, is masking

to the forefront, where viewers are invited to

savor them and to share them, over and over

and then, long after it has dried, peels off,

like masking tape. Between the application of the masking fluid and its removal, Kahler

Kahler has been awarded numerous honors

Wesleyan University in 1991. Within his junior

including residencies at Paintingâ&#x20AC;&#x2122;s Edge Res-

year of college, he spent a semester abroad

at Parson's School of Art And Design and

for the Vermont Studio Center. His work has

the American University in Paris, France. He

been reviewed and profiled in various art

then went on for an MA at Eastern Illinois

magazines and newspapers. The most recent

University in 1992 and an MFA from North-

western University in 1995 where he studied

Conger. He has been teaching at Eastern

the West End Word to The Riverfront Times.

Illinois University since 1999, where he is a

head of the Painting area.

His work can be found in various public

tions in Chicago and St. Louis and numerous

and private collections including the Daum

thematic exhibitions throughout the coun-

ington University School of Medicine in

Events- The Works of Chris Kahler and Charles

Bio-Dynamic, a solo exhibition of paintings by Chris Kahler. Bio-Dynamic is potent and colorful; more cellular and molecular than astral. Ho...

Bio-Dynamic, a solo exhibition of paintings by Chris Kahler. Bio-Dynamic is potent and colorful; more cellular and molecular than astral. Ho...