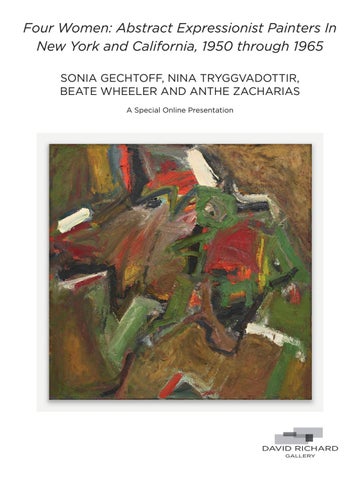 David Richard Gallery is pleased to present Four Women: Abstract Expressionist Painters in New York and California, 1950 through 1965, an exhibition of paintings by Sonia Gechtoff, Nina Tryggvadottir, Beate Wheeler and Anthe Zacharias. This presentation focuses on paintings that were made in New York and California during seminal periods in each of the artist’s careers as they transitioned from the West coast to the East coast of the US, or in the case of Tryggvadottir, her trans-Atlantic move from Europe back to New York. The presentation will be available exclusively online from December 5, 2018 through January 14, 2019 at the link below. The gallery represents each of the artists and this will be the inaugural exhibition with the gallery for Gechtoff, Wheeler and Zacharias to celebrate the holidays. Click the link below to go to the exhibtion page https://www.davidrichardgallery.com/Exhibit_Detail.cfm?ShowsID=464

These four women artists developed their signature visual language early in their careers. Each painted for six decades, with the exception of Tryggvadottir who died young in 1968. Tryggvadottir had a successful 30-year professional career that was both productive and, like the other women artists, challenging. Most recently, Gechtoff’s paintings were included in the very important exhibition, Women of Abstract Expressionism at the Denver Museum of Art in 2016 that subsequently traveled to the Mint Museum and the Palm Springs Museum of Art in 2017. The aesthetics, approaches and techniques utilized by each of these women to create their respective Abstract Expressionist paintings was very different from one another. Gechtoff often used dark colors and black backgrounds combined with brighter and bold colors to create strong color contrasts between the central elements and ground. Thick, impasto surfaces were her signature, created with the palette knife and using powerful, bold, sharp strokes. She mostly worked large scale and the paintings always had a commanding presence. Trygvadottir, also using a palette knife, painted easel-sized works comprised of blocky, planar shapes of color that floated over darker grounds. The painting surfaces were textured with rich, layered depths of pigment and the blocky shapes seem to float in clusters. Wheeler’s paintings have a flatter surface and pigment was applied with brushes. She used a tremen-

dous amount of color with defined palettes for each composition and distinct small strokes. From a distance, the adjacent color combinations meld one into another, creating new and different hues and demonstrating her command of color and color interactions. Paintings by Zacharias are powerful with bold, strong strokes and very thick applications of pigment. Her paintings from the early 1950s had a darker or more neutralized palette, but with extremely thick layers of paint, the mass alone gave them a physical and literal presence. Later in the 50s, using less paint and deft at its application, the surfaces had more texture, drawing more attention with far less mass. Each of these painters was very well educated, studied under notable and respected artists and scholars, they had friendships, interactions and were peers with other important artists of their time. However, the well-deserved recognition of their technical, aesthetic and historical accomplishments was not as robust as it should have been during their careers. While each remained passionately committed to their painting practice and abstract art, their careers did not fully develop with critical success in New York. Zacharias and Wheeler had become more reclusive in the 1970s and content working alone in their studios, while Gechtoff pushed ahead and tried to remain active in galleries, the local art scene and teaching. There are a number of other common and interesting links between these women that connect them at many different levels. Gechtoff, Wheeler and Zacharias were originally from the New York and Philadelphia areas on the east coast of the US. However, each made their way to the Bay Area for work and studies, then each retuned to New York in the late 50s. Tryggvadottir, originally from Iceland, came to the US in 1943, only to be deported in 1949 during the â&#x20AC;&#x153;Red Scareâ&#x20AC;? and returned to New York in 1959. Thus, each artist had an East / West bi-coastal or trans-Atlantic change in geography during pivotal periods in their careers that had a profound impact on their critical recognition and commercial success. David Eichholtz New York December, 2018

Sonia Gechtoff (1926-2018) Sonia Gechtoff was born and raised in Philadelphia. After graduating in 1950 from the Pennsylvania Academy of the Fine Arts, she moved to San Francisco in 1951 where she was greatly influenced by the painting of Clyfford Still. She taught at the California School of Fine Art working alongside Hassel Smith and Elmer Bischoff and associated with other Bay Area Abstract Expressionist painters such as Madeleine Diamond, Lilly Fenichel, Deborah Remington, Jay DeFeo and James Kelly, who she married. San Francisco had a positive impact on Gechtoff, she was very much involved in the unique cultural scene and felt the local support. It is where she had her greatest achievements, such as developing her bold use of the palette knife to create long, sharp strokes of pigment across the canvas and the corresponding early recognition with solo exhibitions at the San Francisco Museum of Art (currently SFMoMA) and De Young Museum. Gechtoff moved to New York in 1958 and worked there until she passed away in early 2018. Though she exhibited at prominent New York galleries, including Poindexter Gallery and Gruenebaum Gallery, significant critical recognition was more difficult to achieve. She felt that the San Francisco art community was more open and treated women artists with greater equality than she experienced in New York. However, never stopping and always moving forward, Gechtoff painted and exhibited throughout her entire career and taught at the National Academy Museum and School in New York, New York University and Art Institute of Chicago. Compositionally and aesthetically, her work changed over the decades. Given her interests in figuration, architecture, landscape and earth elements, representational elements became more prevalent in her paintings and drawings, while abstraction and gestural brush strokes remained constant. She switched from oil to acrylic paint and traded the palette knife for graphite to maintain strong, sharp defining strokes and boundaries in her work. Gechtoffâ&#x20AC;&#x2122;s artworks are included in the permanent collections of the Baltimore Museum of Art, Maryland; Achenbach Foundation, California Palace of the Legion of Honor, San Francisco; Denver Art Museum, Colorado; The Solomon R. Guggenheim Museum, New York; Metropolitan Museum of Art, New York; Museum of Modern Art, New York; National Academy of Design, New York; Oakland Museum of Art, California; San Francisco Museum of Modern Art, California; Museum of Art, Stanford University, Palo Alto, California; and Worcester Museum of Art, Massachusetts, among others.

Nina Tryggvadottir (1913-1968) Nina Tryggvadottir was born in 1913 in Seyðisfjörður, on the East coast of Iceland, where she was raised before moving to Reykjavik with her parents. Tryggvadottir was interested in art from an early age and would take art lessons from her uncle, the landscape painter Ásgrímur Jónsson. In 1935 Tryggvadottir went to Copenhagen to study at the Royal Danish Academy of Art, following which, she lived in Paris. After returning to Iceland at the outbreak of WWII, she went to study in New York on a stipend from the Icelandic State. There, she studied under Morris Kantor, Hans Hoffman and Fernand Leger, and exhibited at the prestigious New Art Circle Gallery run by JB Neumann. She was asked to create stage sets and costumes for a staging of the famous ballet, Soldier’s Tale, by Igor Stravinsky and CF Ramus. After being banned from the US under McCarthyism, Tryggvadottir lived in Paris, where she exhibited at the Musée d’Art Moderne and London, where she showed works at the Institute of Contemporary Arts and also presented numerous solo exhibitions at galleries throughout Europe. She was permitted to move back to NY in 1959 where she lived and worked until the end of her life in 1968. Tryggvadottir has exhibited internationally and her work resides in numerous private and public collections throughout Europe, Japan, and the United States, including: the Museum of Modern Art, NY; Musee National d’Art Moderne, Centre Georges Pompidou, France; The National Gallery of Iceland; The Reykjavik Municipal Art Gallery, Iceland; and Musee D’Art Moderne de la Ville de Paris, France.

Beate Wheeler (1932-1917) Beate Wheeler, born in Germany in 1932, fled with her family in 1938 and arrived at Ellis Island in New York. She studied at Manumit in Pawling, New York until 1945, an experimental Christian socialist boarding school for refugee children. After receiving her BFA degree at Syracuse in 1954, Wheeler earned her MFA at Univeristy of California, Berkeley under Abstract Expressionist painter, Milton Resnick. While in the Bay area, she met Mark di Suvero and the two moved to the East Village in New York. Together with Robert Beauchamp, Elaine de Kooning and Patricia Passlof, they formed the March Gallery, one of the eight galleries and artist cooperatives that were known as the 10th Street Galleries. Wheeler married the writer and artist Spencer Holst. They were some of the early residents at the Westbeth Artists Housing in New York’s West Village. Wheeler lived and worked there the rest of her life. She painted regularly and produced drawings and artworks for Spencer’s publications. She exhibited primarily at the Wesbeth galleries and had many dedicated private collectors, including Nelson A. Rockefeller. Following a 15-year battle with Parkinson’s disease, she passed away May 14, 2017.

Anthe Zacharias (b 1934) Zacharias was born in Albania. Her parents immigrated to the United States and she grew up in New York on the west side of Manhattan in Hell’s Kitchen. She attended Queen’s College from 1952 to 1956 where she studied under art historian Robert Goldwater as well as John Ferren and Barse Miller. She then went to the University of California, Berkeley, where she met Mark di Suvero and studied with George McNeil and Erle Loran, receiving her M.F.A in 1957. Returning to New York, Zacharias exhibited at the legendary March Gallery in the early 1960s along side di Suvero and received recognition and mention form Dore Ashton. Between 1960 to 1968, she lived and painted in an old sea captain’s residence at Coentis Slip near South Ferry in the same area as some of the most renowned figures in the art scene of that time: Jasper Johns, Robert Rauschenberg, Barnett Newman, Ellsworth Kelly, Mark di Suvero, Agnes Martin, James Rosenquist and Robert Indiana. In the mid-60s, Zacharias exhibited at the Great Jones Gallery along with Louise Bourgeois and in the early 1970s, at Green Mountain Gallery in Soho in Lower Manhattan. In the mid-1970s, Zacharias became somewhat reclusive and avoided exhibiting in galleries. However, she continued to paint every day in her studio and evolve her own visual language and experimental methods of applying paint on new and novel supports. Also, from the 1980s through 2000, she was closely associated with Socrates Sculpture Park in Long Island City, Queens and working with local children groups and teaching. She worked on two large commissions for the Park, including a brightly colored 35-foot mural. In 2006, Zacharias contributed a work to the “Peace Tower” shown at the Whitney biennial of that same year. She continues to paint, albeit on a much smaller scale.

David Richard Gallery is pleased to present Four Women: Abstract Expressionist Painters in New York and California, 1950 through 1965, an ex...

David Richard Gallery is pleased to present Four Women: Abstract Expressionist Painters in New York and California, 1950 through 1965, an ex...