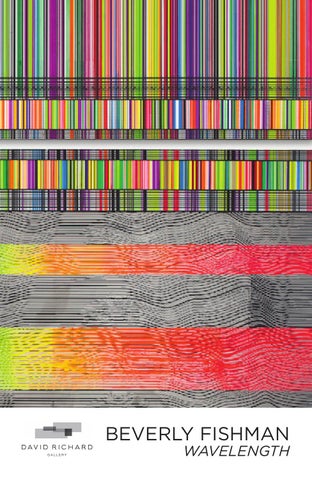 Delectable, Delirious, Dilemma by Lilly Wei Beverly Fishman is obsessed with drugs. In her case, however, it manifests itself as paintings and sculptural objects, eye pharma cum eye candy. Meant to seduce, these deliriously colored, psychotropic works, imaged as both abstractions and representations, are derived in part from feminist and postfeminist ideologies, from what Betty Friedan’s Feminine Mystique (1963) described as the plight of the mid-20th century American woman. Confined to her suburban home, to her spotless kitchen under a kind of self-imposed house arrest, these women, many of them Smith graduates like Friedan, were pictured breathlessly cooing over the latest “pure products” of American consumerism, themselves a perpetually smiling, improbable product packaged by Madison Avenue. In reality, however, they were quietly going crazy, solaced by surreptitious drinking and increasingly, rainbow-hued pills, cruelly dubbed “mother’s little helpers.” Fishman takes this multifaceted premise in multiple directions, part of an ongoing project that has absorbed her for almost twenty years. Stylistically, her hallucinatory paintings are indebted to Minimalism, Op Art, stripe or pattern paintings, to Peter Halley’s, Philip Taaffe’s, and Gerhard Richter’s conceptualized abstractions, eventually shifting into imagery extrapolated from the biotechnical and the digital. Fishman’s vision of body art, over time, has turned to the signs of our deconstructed, depersonalized, denatured corporeality signified by spectral analysis, EKG or EEG signals, barcodes from pill bottles and other indicators of our physiological

responses. Her work, she said, is a report on current social conditions and the history of abstract painting, exploring how abstraction can portray the body sensually and analytically, aesthetically and emotionally. As Richter and others including Fishman have demonstrated, abstraction and representation are not only not mutually exclusive but they are interdependent, the tension between them exhilarating. Fishman makes three distinct categories of work: full-spectrum paintings on polished stainless steel, in some ways the most abstract—and also not; glass sculptures; and auto-chromed wood objects, the latter two clearly representations of pills. All are so vividly colored, so visually charged that processed by our brains, they function like intoxicants themselves, delivering a sensorial/neurological jolt that Fishman deliberately cultivates, so high-pitched that they verge on the auditory. For this exhibition, a vitrine displaying a spill of sparkling glass pills is among the works shown, representing the three-dimensional side of Fishman’s pharmacopeia. Her glass capsules are beautiful and like the real products of drug companies, she presents them as fetishized, alluring objects promising instant gratification. The emphasis in “Wavelength,” the name of the exhibition, however, is painting. Although the imagery is digital, the countless bandings and patterns are primarily silkscreened and so meticulously executed that there is hardly a painterly trace unless scrutinized. Another juxtaposition of opposites, this coupling of the hand-made and the computerized

is a variation of sorts on nature versus (pixelated) culture. The execution is extremely slow, extremely laborious and Fishman employs several assistants to help her, otherwise her production, she claimed, might be one work per year. “I’m interested in all the incidents that occur as paint is being put down; I think of the saturation of color, of the gestures of the hand, of the tension in the body, as layer after layer is applied, of the way Richter uses a squeegee, for instance, then I respond.” And she wants her work to appear intense, difficult, not something that looks tossed off, a thing of the moment. “I truly believe that there should be mystery in art and I want the viewer to know that these paintings were fought for.” None of it is easy and the coloration has been worked and re-worked, then worked some more until it satisfies her exacting eye, her rigorous intuition. Fishman’s impulse is to load up the painting, even though she can’t put everything into it that she wants to, or at least not all at once. Her paintings, nonetheless, seem to leap off the wall, an assertiveness that is not only about opticality and formal considerations. When she came of age in the 1980s, painting was just reviving after a decade of critical neglect and had to be clamorous and immersive in order to be noticed. In terms of scale, the “Dividose” paintings are Fishman’s largest ventures, extending 12 to 14 feet at times, divided into arrangements of two or three stainless steel panels that incorporate the wall—white—as part of their imagery. (“Dividose” refers to the scoring of tablets that allocate dosages and

permits easy breakage for those who didn’t know.) Fishman likes modularity and systems, a legacy of her modernist heritage but they are also part of the multiplicity of contemporary formulations, emblematic of an infinitely expansive digitalized field, of a sense of simultaneity. The fluorescent colors can be cool, but also unnervingly vibrant in their design and pulsations, and while the subjects are specific, everything is ultimately subordinated to the painting’s requirements. The barcodes, for instance, are exact but tweaked to create better color sequencing, to push it along. The wavering, hypnotic lines are from EKGs, EEGs as mentioned above, from DNA codes and the delicate diamond patterns are computerized designations for neuron spikes in the brain. Functioning like a clouded mirror, recalling Richter’s mirror paintings, the polished stainless steel support captures the painting’s surroundings and the viewer’s image, making them complicit, part of the work, even if the reflection is mediated, muted. In perpetual motion, the surface is constantly dissolving, changing, depending upon what passes before it, its fluctuations paralleling a reality that is also in flux. The smaller works, untitled, are made on a single, flickered, polished panel but equally potent, and seem to be temporary stoppages in a continuous stream of data and images, windows rather than panoramas. Fishman began her project in large part because of her interest in the body, how it is defined, identified, imaged. She focused on the cell as the essential constituent of that identity and researched

it on a microscopic level. Exploring further, she began to discover the many images that science uses to represent our physical being and how, as technology changed, so did models for that representation. They became codes for the body’s reality that, in turn, were a reality, in which the sections of the code metonymically stood for the whole. Fishman came to realize that the cell was the source of disease as well as the source of the cure, and the drugs that we took as a cure were also the disease, in a circular, symbiotic and complicated relationship. “Better living through chemistry,” she observed, “was both true and not. Drugs could be curative, but they could also be a poison. Or they could be a panacea, a placebo that sometimes could also prolong life, could act as a cure.” Her fixation on science and medicine is inevitably very personal, autobiographical, because there has been much illness in her family, much loss. “It would be unimaginable that my obsession with this would not be personal. Everyone’s art is personal.” It is fascinating, Fishman thinks, that we are sensuous creatures of flesh and blood but can now be represented by variegated sequences of lines and represented with such extraordinary precision and detail. Everything about our bodies can be read from those concatenations, in particular the poignant flatline that indicates our bodily demise. Cancer is also something she has considered at length, finding very

mysterious the fact that a miniscule, barely noticeable alteration in the DNA code can cause cataclysmic differences that determine whether you live or not. Witnessing the first years of the AIDS epidemic, Fishman mourned the many friends who had succumbed to its ravages. “They were much too young to die.” It haunts her still. Her work, over the years, have become cooler, more distanced—at least superficially—because science and technology provided images that were cooler, more distanced. Cells, with their baroque contours “looked romantic next to an MRI,” she said. Nonetheless, in the end, her intense, restless interpretation of this readymade lexicon is anything but clinical or neutral. And, if the technology changed, discovering other, even more analytical ways to picture the body, she would appropriate it without hesitation. Fishman’s subject obviously has a dark side to it but reality has its dark side. Her paintings and sculptures dazzle, on the other hand, triumphantly challenging that darkness, their carefully calibrated portrait of our excesses acting as both an indictment and an antidote. They are social document, art history, personal history, an aesthetic experience, a metaphor and also very real. In fact, contrary to what was stated above, she has put everything into them, with obviously more to come. Lilly Wei New York

BEVERLY FISHMAN BIO Beverly Fishman received her BFA from the Philadelphia College of Art in 1977, and her Master of Fine Arts from Yale University in 1980. She subsequently taught at the College of New Rochelle, New York, the Maryland Institute College of Art, and Cranbrook 22